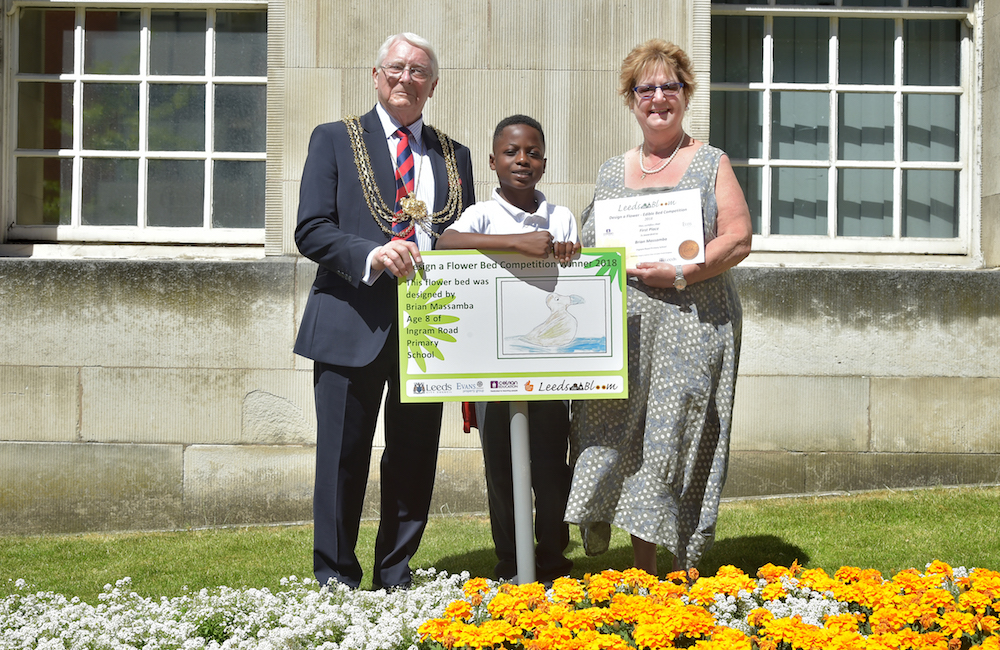 Green fingered youngsters from across the city were invited to a celebration at Leeds Civic Hall this month as part of the annual Leeds in Bloom Awards.

The Lord Mayor of Leeds, Councillor Graham Latty, and chair of Leeds in Bloom, Councillor Angela Gabriel, were on hand to present each winner with an art set and a holdall.

The schools of each winner also had plenty to celebrate as they each received a £300 voucher to spend at the Arium, Leeds Park’s plant nursery, on their own green fingered ventures.

This year saw over 2,500 entries from 64 schools, and every youngster taking part received their own certificate.

Thanks to the hard work of the council’s parks and countryside team and striking plants grown locally at the Arium, the winners can now see their design brought to life in one of the flower or vegetable beds surrounding the Civic Hall, alongside a plaque showing their name and their original artwork.

The competition plays a big part in Leeds’s entry into this year’s National Britain in Bloom competition, which will be judged on 7 August 2018.

“Once again, we received some outstanding designs from young people in both the Edible Flowerbed and Flowerbed competitions, so it has not been an easy task judging the entries.

“It was great to meet this year’s winners at the Civic Hall and present them with their well-earned prizes. Across the city there is a strong in bloom network and plenty of green fingered residents, but it was great to focus on our young people in these categories. I was delighted to see the pleasure these youngsters got from getting recognition for their efforts and that is what will spur them on to keeping in bloom alive in our schools. I’m confident the next generation will have the talent and desire to ensure Leeds continues to bloom year after year.”