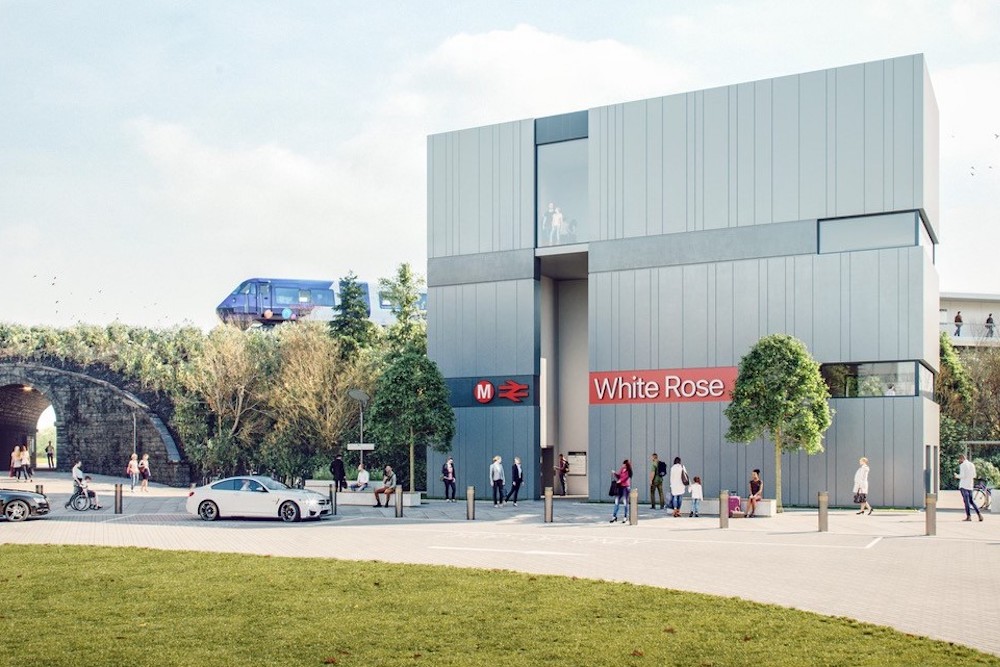 Senior councillors have given the green light to plans designed to kickstart construction work on a new railway station in South Leeds this autumn.

The White Rose Railway Station has already received planning permission and is regarded as a shovel-ready infrastructure project that will play a crucial part in connecting people in communities such as Cottingley, Churwell and Millshaw to jobs, education and training opportunities, while at the same time boosting the city’s response to the climate emergency.

It will also act as a catalyst for the re-imagining of the neighbouring White Rose office park, which is owned by property development and investment company Munroe K. The company’s emerging economic masterplan for White Rose Park – home to major employers such as HSBC, Capita and DAZN – includes the creation of new jobs and the provision of high-quality innovative space for work in fields related to smart cities and internet of things (IOT).

The new station is forecast to cost around £22m and is being delivered via a collaboration between Leeds City Council, Munroe K, Network Rail and the West Yorkshire Combined Authority. As part of this link-up, Munroe K will develop the station and is due to make a contribution of up to £4.5m plus land.

Plans for the station – which will be located on the Transpennine rail route, near to the White Rose Shopping Centre – were considered at a meeting of the council’s executive board earlier this week. During their discussions, members approved a recommendation from officers that the council enters into a loan facility agreement with Munroe K. This will see the council initially providing Munroe K with a loan of up to £4.5m to cover the company’s share of the scheme’s funding package. The loan will be repaid in full by Munroe K, meaning the arrangement is cost neutral to the council.

Construction work on the station could now start as early as this autumn, with a view to completion by the end of 2022 – a swift turnaround that will allow Leeds to reap the maximum economic rewards from the scheme as the city recovers from the effects of the Covid-19 pandemic.

Key environmental benefits, meanwhile, will include better air quality and a reduction in traffic congestion. Munroe K has also said that it will formally commit to working with the council on the implementation of the masterplan for White Rose Park and its measures for aiding inclusive growth.

“Improved transport connections are a hugely-important way of unlocking the potential, economic and otherwise, of all our local communities, particularly now, as we look to bounce back from the many problems caused by COVID-19.

“The new White Rose Railway Station will help deliver those connections, making it easier for people to access jobs, education and training. It will also underline the council’s commitment to tackling the climate emergency by getting more cars off the city’s roads.

“In addition, the station will have a vital role in driving wider regeneration efforts, both at the White Rose Park and in areas across the rest of south Leeds, by supporting housing and economic growth.”

“In my manifesto, I pledged to improve public transport, tackle the climate emergency and protect our environment, and that is why I’m delighted to see this scheme move a step closer to starting on site. “The new White Rose Rail Station will connect more people with job, training and education opportunities, while also helping us tackle the climate emergency on our way to becoming a net zero carbon economy by 2038.”

Councillor Susan Hinchcliffe, who is nominated to be transport portfolio holder for the West Yorkshire Combined Authority and is leader of Bradford Council, said:

“We’re pleased to be working in partnership on this important scheme, which will improve transport links and act as a catalyst for local regeneration, including housing and job growth.”

Public consultation has previously indicated widespread backing for the station project, with 71 per cent of respondents saying they were either very happy or happy with the plans. The White Rose station scheme will receive £5m from the Leeds Public Transport Investment Programme and up to £12m from the Leeds City Region Transforming Cities Fund – a major programme of transport infrastructure investment secured as part of the West Yorkshire devolution deal. Support is also coming from the Government’s New Stations Fund.