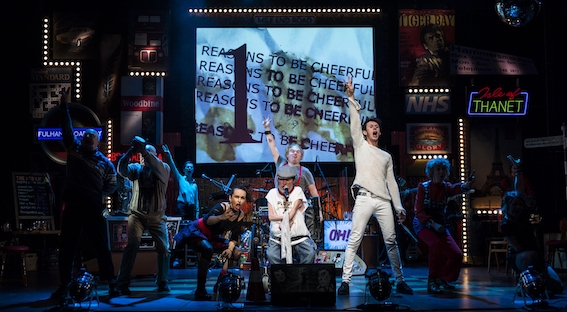 It’s 1979. Labour has just lost the General Election to the Tories. Strikes rock the nation and Ian Dury and the Blockheads’ Reasons to be Cheerful (Part 3) is climbing the charts. Die-hard fans Vinnie and Colin are on a mission to see Ian Dury and the Blockheads play Hammersmith Odeon. With no tickets to a sold-out gig their journey throws more at them than they could have ever expected….

South Leeds Life has free tickets for the Press Night on Tuesday 10 October 2017 at 7:30pm. If you would one or two tickets in return for writing, or helping to write, a review please email: info@southleedslife.com telling us why you would like the tickets.

Featuring stone-cold classic songs including Hit Me With Your Rhythm Stick; Plaistow Patricia; Sex and Drugs and Rock and Roll; Sweet Gene Vincent; What A Waste and the titular Reasons to be Cheerful (Part 3), the show also features new song If It Can’t Be Right Then It Must Be Wrong written exclusively for the production by members of Ian Dury’s band The Blockheads and Graeae performer John Kelly.

Reasons To Be Cheerful plays at West Yorkshire Playhouse from 10 – 14 October.