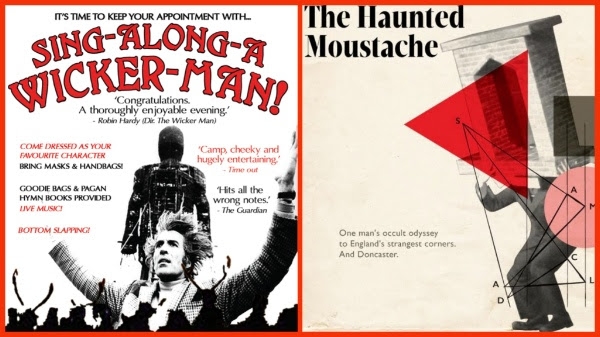 The HUB on Bath Road, home to Holbeck’s own Slung Low Theatre, is the place to see two spooktacular shows over the Halloween period.

Hosted by David Bramwell and singer Eliza Skelton, Sing-along-a-Wicker-Man is a unique night of entertainment for Wicker Man enthusiasts, featuring live music, audience sing-a-longs, a rare screening of the super-8 comedy-classic “the Weakerman” and other treats.

Sing-along-a-Wickerman! from david bramwell on Vimeo.

Once sufficiently warmed up, the audience are provided with goody bags full of dark secrets (for use during the film) and a Pagan Hymn Book with lyrics to all the songs. Then, at the Witching Hour the film is shown in all its camp, twisted glory, with David and Eliza at the helm guiding the crowd along with the words, actions, dialogue and buttock-slapping!

Author David Bramwell (No9 Bus to Utopia and The Odditorium, The Mysterium) gives a fascinating talk that explores magic, memory, occultism, the history of spiritualism, shamanism, Britain’s weirdest museum (the Pitt Rivers) and psychedelics. Attempting to answer the question – what does magic mean to us in the 21st century? – Bramwell’s unique journey begins with a personal tale about a hundred-year old moustache in a box, bequeathed to him by an eccentric aunt!

After inheriting this singular item, Bramwell embarked on a ten-year odyssey to discover its original owner. It was an adventure that introduced him to seances, spiritual churches, Nick Cave and two years in a cult drinking the Amazonian psychedelic, ayahuasca. As well as being a funny and moving story, David’s talk explores our relationship to objects and how we invest meaning in the world around us, leading to a deeper understanding of the true nature of magic.

Performances are “Pay What You Decide” – you decide how much to pay after you have seen the performance. All monies are then given directly to the performing company. Please note the venue is cash only, and there is a cash machine 2mins walk from the venue on the corner of Water Lane and Marshall Street.