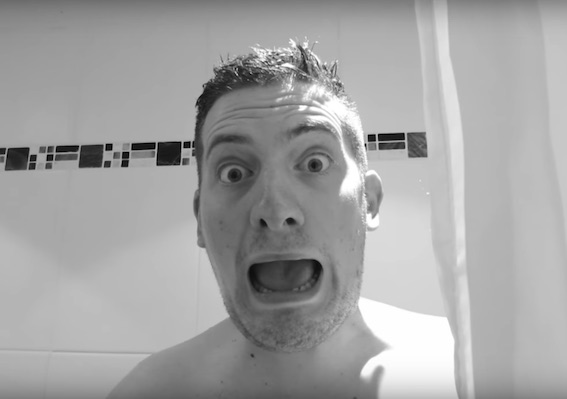 Most people send cards, ring relatives, or post the news on Facebook, but horror fans Nathan and Mary Duce decided to share their news by recreating the shower scene from Alfred Hitchcock’s film ‘Psycho’.

The couple enjoy recreating scenes from horror films on video, so when Mary became pregnant with their first child, it seemed the natural thing to do. The scene shows Nathan trying to figure out what 2+1 means and then taking a shower. Mary bursts in brandishing a pregnancy test rather than a knife.

Friends and family of the couple, from New Forest Village in Middleton, were very happy and excited by the news and not put off by the unorthodox message. Nathan and Mary have now gained national attention since the Daily Mail and Fox News picked up on the story. Nathan is delighted with the publicity:

“It’s a nice feeling to know that the little baby has so much love around the world.”

Nathan has been making videos for around 10 years and would like to work full time in the industry.

“For the time being though I am happy with it being my side hobby, it keeps me busy and my creative juices flowing. I already have a lot of ideas for short horror films with the new baby involved!” he says.