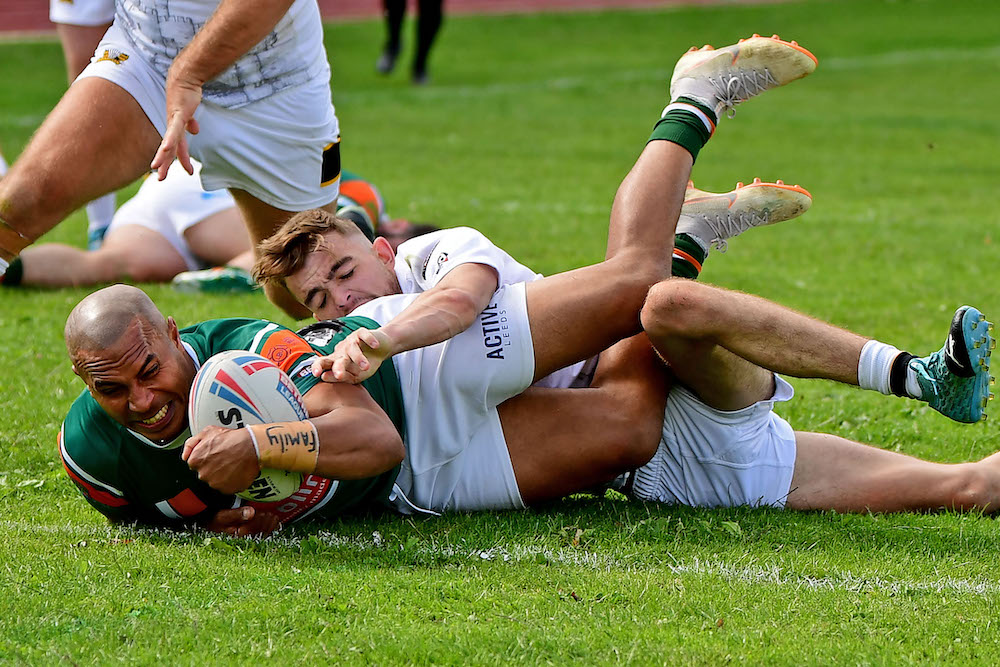 The Parksiders were on it from the word go, and with Doyle (on-loan from Featherstone Rovers) and strong running winger Wayne Reittie back in the fold things look a lot healthier for the South Leeds club sitting four points clear in 6th position in the Betfred League 1.

From the kick-off Hunslet looked sharp, retrieving the ball Ethan O’Hanlon (today playing at Loose Forward) set off on a barnstorming run. Joe Sanderson helped the attack along before Harvey Hallas went over with only a minute played.

Disaster though for the Parksiders as Sanderson picked up a shoulder injury and had to leave the field, throwing all the pre-match plans into chaos. Jordan Syme filled in for Sanderson at stand off and with the boot, but Hunslet led 6-0.

Moments later Hallas again was a force, punching a hole in the Crusaders’ defence. Quick passing to the left involving Jordan Syme sent Jacob Doyle over in the corner and after only 8 minutes Hunslet led 10-0.

But North Wales do not sit second in the league for nothing, and after finding touch from the restart and a few helpful penalties Robert Massam found his way over in the left corner. 10-4

The wind was whipping about the South Leeds Stadium and a devilish Crusaders’ kick was mis-handled by the Hunslet defence and from the resulting scrum quick hands saw Patrick Ah Van score in the right corner. 10-10 at the quarter mark.

North Wales now started to look the part, and although Jordan Syme nudged Hunslet ahead with a penalty for offside an angled run by Gavin Rodden wasn’t picked up and the second rower strolled under the posts to give the Crusaders a 12-16 lead.

Hunslet’s defence now had to pass the test, Crusaders looked to score again before the break and take the game away from the hosts. But it was a much steelier wall of green this week and at the break Hunslet only trailed by 12-16. Time to re-organise without Sanderson and take the game to North Wales.

The second half started with a peculiar incident, as a pitch side photographer became ill. The players spotting the man’s distress got the referee to halt the game before treatment was sought. (He later went home feeling fine).

The stop of nearly 8 minutes didn’t affect Hunslet who were straight back on it. Harvey Hallas again proved tricky and was held short, before a combined Cole Oakley, Harvey Hallas break sent Wayne Reittie close to scoring. Although the attack was thwarted Callum Hazzard was sin-binned for the Crusaders giving Hunslet a ten minute man advantage.

On the hour mark Hunslet got back level as Jacob Doyle stretched over in the left corner. 16-16, but with no conversion it was all to play for.

With Crusaders benefitting from a few set re-starts Hunslet again were asked to defend. They did that with aplomb and on 68 minutes Jordan Syme put the slightest of kicks in for Josh Jordan–Roberts to scoop up and score. Syme converting. 22-16

Jordan Paga who in recent weeks has been playing at Scrum Half was always busy and a thorn in the Crusaders side. On 72 minutes Paga’s kick was spilt and Wayne Reittie proved too strong for the North Wales defence. 26-16.

With Joe Sanderson leaving the field injured, both Jordan Syme and Josh Jordan–Roberts had a go at the goal kicking. None of the missed conversions were easy, but at 26-16 it was still too close for comfort. Step up Jacob Doyle, who on 78 minutes after great passing went over for his hattrick try. The try was a great team try and took the game beyond North Wales. 30-16

Although the 80 minutes was up, we still had plenty of added time and after retrieving the ball from a kick-off that looked way short, Crusaders first bombed a try before getting a consolation score through Bradley Billsborough. 30-22

On the hooter Hunslet were the deserved victors. Doyle and Reittie made a big impact after missing last week’s trip to Doncaster. But Syme and Paga were excellent controlling the play, whilst loanee’s Hird and Walker ran strongly. The Man of the Match though went to Harvey Hallas who is having an excellent season all round this year.

Coach Alan Kilshaw will be pleased that his side got the better of a top two team, but knows that he can’t get too carried away. At this stage of the season it’s all about building momentum for the end of season push. Hunslet look well placed, and with some loan players starting to gel, their next game a week on Saturday at home to 4th placed Rochdale Hornets, will be interesting.