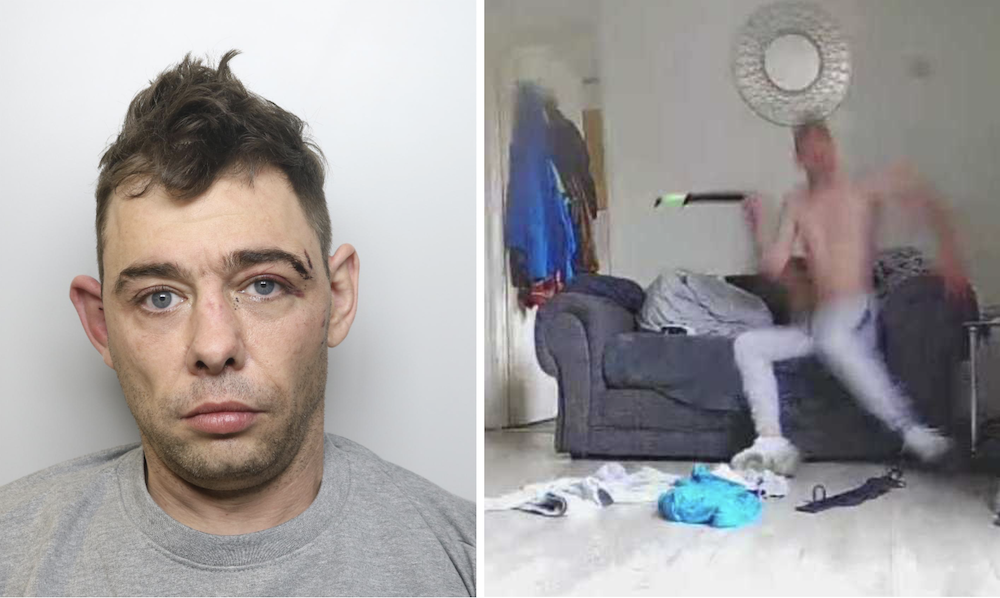 A Beeston man who terrorised his partner with a zombie knife during a brutal attack at her home has been jailed after ‘dog cam’ footage of the incident helped police to bring a prosecution.

Anthony Murgatroyd had set up a motion-sensor camera in the living room of the victim’s home in Cross Green, Leeds, to find out which dog was chewing the furniture.

But when he launched a terrifying attack on the woman on November 5 this year, sparked by an argument about him seeing prostitutes, the camera triggered and captured footage that gave specialist domestic abuse officers vital evidence.

During the incident Murgatroyd dragged the victim into the street and was seen hitting her.

She escaped back into the living room, but Murgatroyd followed before hitting her about the head and pulling her about by her hair.

He grabbed the fearsome-looking zombie knife from the floor and lunged at her with the blade before pushing it towards her face and then making stabbing and slashing motions to her body.

He put the knife behind the sofa, where a large dog could be seen cowering in distress, and pulled a screwdriver from his jogging bottoms and shoved it at the victim’s face. He put the weapon away before hitting her again.

He then handed her a beer bottle and shouted at her to open it with her teeth, which she did. He also asked her to touch the zombie knife.

The footage showed the victim clearly terrified throughout the ordeal.

She eventually managed to escape from the address and ran to get help from neighbours and police were alerted.

Officers traced 38-year-old Murgatroyd to his address in Waverley Garth, Beeston, and arrested him in a violent struggle where incapacitant spray had to be used and Taser drawn.

When officers spoke to the victim, she was still in fear of the suspect and felt unable to support a prosecution.

Footage was however recovered from the ‘dog cam’ which gave a detailed illustration of Murgatroyd’s actions.

Detectives from Leeds District Safeguarding Unit were confident it could be used as the basis for an evidence-based prosecution and Murgatroyd was charged with assault occasioning actual bodily harm and possession in private of a zombie knife under the Criminal Justice Act 1988.

The victim was revisited and felt confident enough to provide a victim personal statement to be submitted to court to outline the effect the incident had on her.

Murgatroyd pleaded guilty to both offences when he appeared at court on 7 November. He received a 20-month sentence at Leeds Crown Court yesterday (28 November 2022), which included a previous domestic-related assault in August.

“This was a prolonged and violent attack involving weapons, and the victim feared for her life during what was an absolutely terrifying ordeal.

“She was left so distressed and afraid of Murgatroyd that she felt unable to support a prosecution against him, but once officers secured and viewed the footage from the ‘dog cam’ they were able to use that as key evidence to progress to charges.

“We are committed to doing everything we can to tackle violence against women and girls and we take all reports of domestic abuse seriously and use all available means to bring offenders to justice.

“Our specialist domestic abuse officers will always support victims with the aim of giving them the confidence to provide statements and support prosecutions against violent partners but, where this isn’t possible, we will other look at other ways of taking action against offenders and keeping victims safe, as we have in this case through some fantastic work by PC Chloe Fennell on the Domestic Abuse Team.”