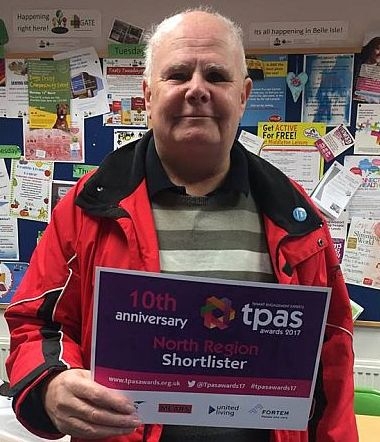 Kenneth Ingram, Diary of a blogger and volunteer newspaper reporter (January to August 2017). 500+ blogs and many newspaper articles in the last 2 years.

Where do I start? Firstly, last year was not a good one as far as my health concerned. But yet had a happy ending I had an operation and they took biopsies to see if I had cancer, no they turned out benign. Also had another hospital procedure, again took biopsies, and ruled out cancer.

I completed my 100th parkrun all at Cross Flatts Park. At that time was told I’m the only one to do hundred park runs there, and not go on to other parkruns to complete my 100.

There’s quite a lot of people who helped me along the way to my 100th. Nicky Best helped get to know the parkrun route back in 2014, and he also came along to my 100th. Amanda Binns, Phil and Jess helped me and possibly a 100 more friends I had met over the last 3 years, of doing the parkruns.

A cake was presented to me and bunting put out on the day of my 100th parkrun.
I no longer do the parkruns, as Physio told me to give up running and just concentrate on my walking group.

In September of this year will have completed 2 years of being walk leader of the BITMO’s GATE Walk and Talk walking group. Thanks to all who come on the walk.

I’m sure we will organise a little party on its second birthday. Nothing big just tea and cakes.

Thanks to Carla, for getting me on the Walk group leader course way back in September 2015. The course is been held again in September in Chapel Allerton.

In April of this year I went to Manchester went along with Carla to the TPAS award ceremony where I was short-listed for The Northern Region Tenant of the year final.

I was put forward for this award by Carla in recognition for all my volunteer and Charity work at the gate.

I was along with 12 people short-listed up for this award.

I did not come in the first three, but got a lovely certificate which hangs in my flat with pride, there’s also a copy hung up at BITMO’s GATE, my second home. I’m proud to be in the final 12.

Thanks to Carla and Chris Simpson for nominating me for this award.

In March this Year along with Carla I held a Cuppa for Dementia day at BITMO’s GATE, about 50 people turned up.

I booked a singer for the Cuppa for Dementia event, Julie, who kept us entertained with her singing for an hour.

I invited the lovely Lord and Lady Mayoress along to open the event. I was very surprised to get them to come, as they were near the end of their year as Lord and Lady Mayor, and thought would be busy. I just wanted to see their jag arrive, registration U1.

Gerry and Lynne (Lord and Lady Mayoress) led the dance as Julie sang Is This The Way To Amarillo. Everyone (well nearly) got up for the dance, better than the Peter Kaye version.

Me and others brought along prizes for the raffle. Top prize being a lovely hamper donated by Chris and Julie Holmes. Joint first prize was an invite to The Leeds Civic Hall for Tea and cakes with the Lord and Lady Mayoress.

One ff the BITMO board members won the tea for 2 at the Civic Hall and gave the invite to me for all my volunteer work.
Peter Smith (BEM) of Memory Café Fame and many others came alone to give their support on this very memorable day raising £100 for Dementia charities. Thanks to Carla and Chris Simpson, for paying for the singer and the cakes for the day.

The Cuppa for Dementia day will be held again in 2018 is going to be bigger, watch this space. Just have to arrange this with Carla.

Onto the invite to the Leeds Civic Hall. This was about March time.

Susan could not make it, so I asked Gerry and Steph (volunteers at BITMO’s GATE Breakfast Club) if they would like to go, after asking the Civic Hall if could squeeze another in.

What a lovely day we had, started off in the Lady Mayoress room and had tea and cakes.

Then had a look round all the various rooms in the civic hall.

It was supposed to last an hour, before Gerry (Lord Mayor) went onto another group and Lynne showed us round the rest of the Civic Hall.

I loved the Ark Royal room. About 2 and half hours later we made our way home to end a lovely day.

Later in the year covered the Belle Isle Gala for South Leeds Life and BITMO GATE.

My health apart from Dementia is OK this year. I see Dr Lance Middleton (Psychiatrist) of Aire Court every 2 or 3 months. Peter Smith comes along, just in case don’t understand anything.

Dr Lance has allowed me to continue another year driving, my driving licence has to be renewed every year depending how Lance thinks my Dementia progresses.

I continue to visit Memory Cafés in the South Leeds Area. I set up one myself at the Parnaby Tavern along with Peter Smith (BEM). Due to other commitments I no longer go to this one,
but I enjoy the one held at the Black Bull, Rothwell and The Cop Shop on Elland Road when I can. I’m also involved in the steering group at my local doctors surgery.

From time to time do things with Dementia UK and West Yorkshire Playhouse, such as when I went to see the play Beryl (about famous lady cyclist Beryl Burton) and advised them how they could make it Dementia friendly.

Finally, my memory continues to get worse, so I have made the decision to move home and go back to Middleton, hopefully Acre Court after going on their waiting list.

I have to thank again Peter and Liz Smith for all their help, over the last few years. Also Chris and Julie Holmes without their help, I would not be here now.

Thanks must go to Terry and Chris who went along with me and Sue to see for the last time the village Harrold (Buckinghamshire) where my Mum was brought up and lived as a child before moving with my Dad to Leeds.

Alex Caine (my Mental Health Care Social Worker) who has over the last year helped me a lot mentally and got things done when I needed it, so thank you Alex.

Thanks to Anne, from engage.org.uk for helping with housing forms along with Carla of BITMO’s GATE, again for all her help.

When I move to Middleton I will, as long as I’m able, continue my volunteer work such as BITMO’s GATE Walking group and blogs for BITMO and South Leeds Life Newspaper.

Not forgetting Belle Isle and Middleton in Bloom. Is there anything or anyone I’ve forgot. Lol.

Finally my Editor Jeremy. Thank you for all your help and patience.

Well that’s it for now, 8 month in the making from Kenneth Ingram. (Blogger and volunteer Newspaper reporter).