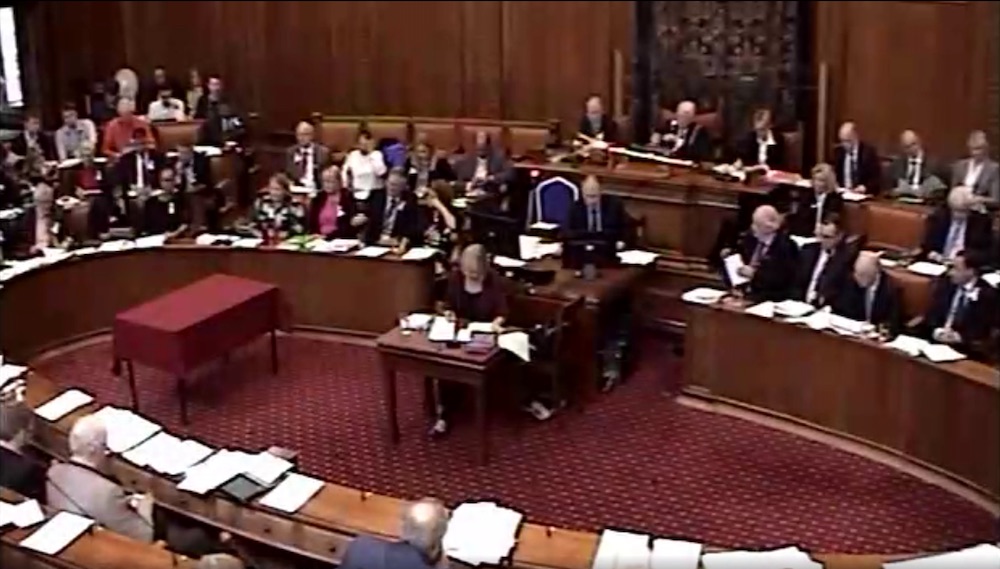 With Holbeck residents and sex work support agencies outside the Civic Hall and then joining the public gallery, Councillors debated how to tackle the issue of the ‘Managed Approach’ to street sex work in Holbeck during a meeting of the full Council at Leeds Civic Hall yesterday (14 November 2018).

As previously reported the ‘white paper’ motion was brought by the Conservative group who had worked with campaigners from the Save Our Eyes group to get the issue debated.

Cllr Amanda Carter (Calverly & Farsley) opened the debate by acknowledging that the problem of prostitution in Holbeck predated the introduction of the Managed Approach. She said that the situation was “beyond acceptable” as pledges had not been lived up to.

“Residents and businesses should not have to put up with this current situation – it’s absolutely appalling.” She said.

“We did not create the red light zone” she said. “Rather we have invested money and resources to better manage the problem of street prostitution.”

She went on to said that the Council’s commitment to an independent review was not new and that they would work with the reference group (which includes Save Our Eyes) in shaping that review. But she warned that withdrawing the Managed Approach would only make matters worse.

Both Andrew Scopes and Angela Gabriel (Beeston & Holbeck ward Councillors) spoke in the debate. In what was Cllr Scopes maiden (first) speech to Council he reminded the meeting that:

“The women who work in the zone are one of the most vulnerable and marginialised sections of society.”

He pointed to the success in raising the numbers of reported crimes against them and of individuals that had been supported out of prostitution by charities such as Basis Yorkshire. He also said the Police were due to roll out a new approach to “punters” – men looking to buy sex – in the next month.

There was an impassioned speech from Cllr Sarah Field (Garforth & Swillington):

“Buying and selling women and children for sex is unacceptable and we need criminal sanctions to stop men from doing it.”

She argued against the use of the term sex worker saying that it normalised work that could never be made safe.

“The inside of a woman’s body should never be viewed as a workplace” she said.

Cllr Angela Gabriel went back over the history starting in 2004 when boundary changes brought Holbeck into her ward. She was appalled to discover 127 women working on the streets of Holbeck at that time. Whilst she and colleagues supported the approach, she described the introduction of the Managed Approach “with no extra resources” being carried out by Safer Leeds without ward councillors knowledge.

She reminded Councillors that a door-to-door consultation of Holbeck residents found 30% in favour of the approach, 30% against and 30% had no opinion. She said that West Yorkshire Police had failed to live up to early promises as Community Inspectors for the area had come and gone, priorities had changed and resources diminished.

“But we are now at a point where it (the Managed Approach) is working” said Cllr Gabriel. “Now is the wrong time to say let’s stop it because if anyone’s got a Plan B please let us know.”

At the end of the debate Labour’s amendment was carried. The full wording of the approved motion was:

“This Council acknowledges it is important to continuously work closely with both sex workers and the community on the Managed Approach to reduce the negative impacts of their work on residents and businesses, ensuring that Holbeck is a safe area to reside and work in.

“Council is aware that since the introduction of the Managed Approach, sex workers are engaging with specialist organisations and professionals, creating a safer environment and arrangements for them to operate in. Safeguarding vulnerable women involved in street-based activity is a high priority and working in partnership with third sector organisations ensures this support is being delivered, resulting in a positive impact.

“Council notes the commitment of the work Leeds City Council, West Yorkshire Police and Safer Leeds are undertaking with the Managed Approach. The programme of enhanced activity and intensive partnership work is providing the opportunity to tackle the significant issues that are experienced as a result of the Managed Approach by those living and working in Holbeck.

“Council notes the commitment by Leeds City Council, West Yorkshire Police and Safer Leeds to undertake an Independent Review of the Managed Approach once the enhanced activity has been given time to take effect.”

You can watch a video of the full debate here as part of the webcast of the whole full Council meeting. The debate is item 13 and starts at 4:09:00 into the video.

4 Replies to “Council commits to review of ‘Managed Approach’”