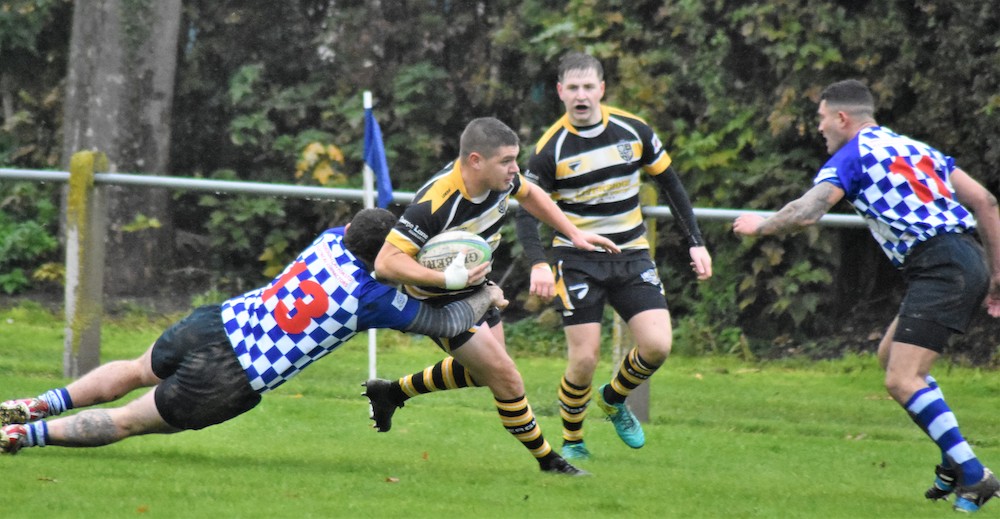 Leeds Cotinthians RUFC travelled to Knottingley for a top of the table clash between the only two sides in the league with an unbeaten record.

With Knottingley having come out on top against Leeds in the cup final it had added spice. Corinthians got off to a flyer in the wet conditions and it wasn’t long before the first scores were on the board.

A kick over the top bobbled and put the full back under pressure due to a great chase from Ryan Croft which forced the full back to force a pass over the wingers head only for Chris Chapman to race through and touch down. Gareth Moore added the extras: 0-7 to the visitors.

Leeds kept in good shape by sticking to their game plan and crashing the ball forward.  Leeds was awarded a penalty just past the half way line which Gareth Moore knocked over to make it 0-10 to the Corinthians, and shortly after Knottlingey found themselves in their own 22.

The majority of the opening 20 mins consisted of relentless pressing from Leeds forcing the mistakes from Knottingley. On 30 minutes Ellis Robinsin kicked through and ran on to his own kick, kicking through again allowed Chris Chapman to run through and touch down. Again the extras added by Gareth Moore. 0-17 to the in-form team. Shortly before the half time whistle Leeds was awarded yet another penalty, and Moore again took the 3 points which then took Leeds to a 0-20 lead at the break.

Leeds knew there would be a response from Knottingley in the second half and there was. Knottingley went a lot more direct and the opening 20 minutes were the most physical seen in a while. Tough challenges and a great game to watch.

Knottingley went over in the corner and were starting to lose the possession more and more. The conversion was not added: 5-20. Again Knottingley threw the kitchen sink at Leeds but the defence held strong. With 30 minutes on the clock and Leeds down to 14 due to a yellow card for a harsh infringement at the maul, Knottingley scored again under the sticks.

Converting left the game at 12-20 with 10 minutes to go. Knottingley scored and converted again late on but it was Corinthians’ day. Final score 19-20 and a great away win. Not many if any will come away from Knottingley with points never mind a win.

Leeds are the only unbeaten team in the league, but are fully aware that all teams are dangerous in this league and look forward to the next battle.