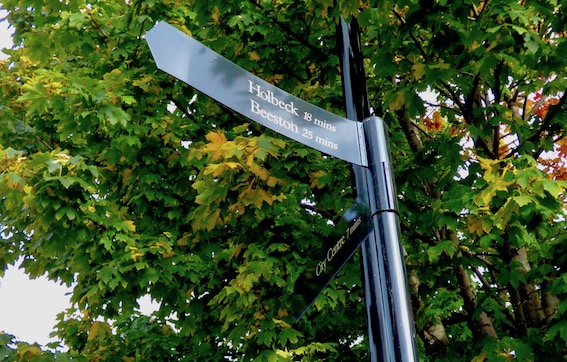 Gold lettering on black has been replaced by white lettering on navy blue as Leeds City Council has replaced heritage trail signs installed by Holbeck in Bloom with new corporate signs.

The black signs were installed last year as part of Holbeck in Bloom’s Matthew Murray Trail linking Holbeck Moor with City Square. The group received a grant to install the signs and produce an explanatory booklet (available from The Holbeck club) from City Connect.

As well as explaining notable buildings along the way, it marked a walking route that avoided the busy roads leading into the city centre.

Ian pickup from the group said “I just don’t understand it. We spoke to the people from the Council, we even had a walkabout to identify the sites for the signs. We were happy to use the same design they were using for Legible Leeds, but they didn’t share that information.”

Councillor Angela Gabriel, ward member for Beeston & Holbeck and a member of Holbeck in Bloom said:

“I spend my time time explaining how the Council’s funding has been cut and cut, but it seems we can afford to take down one perfectly good sign and replace it with a new one giving the same information.”

The group are concerned that it sends a message to people in ‘old’ Holbeck, that they and their community projects are not as valued as those in ‘Holbeck Urban Village’.