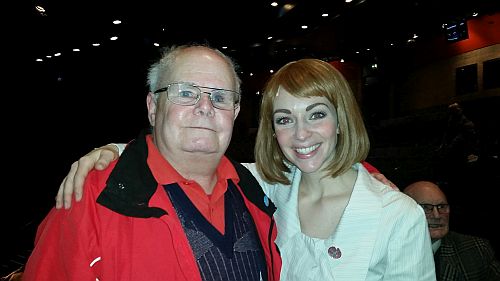 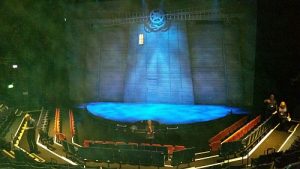 The coach arrived to pick me and various members of the Memory Cafés in the South Leeds Area, including the Parnaby Tavern, home to the Parnaby Pals Memory Café and the Cop Shop Memory Café in Beeston.

We were met at the Playhouse by Nicky Taylor (of the playhouse) and Maggie Graham, just early enough for those wanting to have a coffee or a quick snack.

Lots of people got there earlier for a Playhouse Singing Session which was a chance for people to sing along to familiar songs such as Truly Scrumptious, Me Ol’ Bamboo and Chitty Chitty Bang Bang.

The theatre was filling up and we were eventually joined by an audience of approximately 500 Dementia Friendly people plus around 50 very excited school children. It was all very relaxed as we waited for the show to start. Everyone seemed to know somebody and there was a buzz of excitement as people said hello and caught up with each other.

The show itself was a Dementia Friendly version of the musical, which meant we had extra ushers seeing everyone to their seats and helping people to various parts of the playhouse, such as the coffee shop and toilets. They kept the lights on low when the show started, so that people could see where they were and get up if needed.

The show was enjoyed by all; it had a bit of a pantomime feel with everyone booing the evil Child Catcher. There were two child actors who I thought stole the show, particularly in the first half where they were in nearly every scene.

The songs and singers were excellent and it was nice to see a live band providing the music and occasional sound effects. Nicky said that they toned down the lively ‘Old Bamboo’ dance, some flashing lights and loud bangs when the car backfired, because some people with dementia find really loud noises and flashing lights disturbing.

After the show many of the actors and actresses came into the audience to have a chat and see how we enjoyed the show. Lots of people stayed for a chat and complementary coffee afterwards. Of course like me, Peter Smith wanted a close look at the car, Chitty, to see how it worked.

“Chitty Chitty Bang Bang was the third Dementia Friendly production by West Yorkshire Playhouse and a runaway success judging by the cheers and applause from the near capacity audience at the recent performance.

I was lucky enough to see the show with Ken Ingram, who is a member of the Dementia Friendly Leeds steering group. Ken joined Dementia Friendly Rothwell several years ago when he was diagnosed with the early stages of dementia, since when he has become an active local campaigner for the citywide campaign too.

He has kindly written this blog about the show.”

A special mention for Jon Robyns who played Caractacus Potts, Amy Griffiths (Truly Scrumptious), Andy Hockley (Grandpa Potts) and Childcatcher Stephen Matthews, they were all excellent and it was great to meet them and the cast in person.

After the show finished, I did some interviews with members of the audience, asking how they enjoyed the show and what their best moments were. Everyone I spoke to thoroughly enjoyed the show, and like me thought the children did very well with all the lines they had to remember.

Then it was my turn to be interviewed by the Playhouse film crew who asked me about the show and how I’m coping with early onset Dementia. The film I’m told may be on TV or You Tube and I hope we can use it locally to show people how the Playhouse is carrying out such dementia friendly work.

Well that was it; we all got onto the coach to go home, back to my pick up point at the Parnaby Tavern where I enjoyed a pint afterwards at the end of a good day.

“We work closely with people living with dementia, consulting them on the changes needed for the show and front of house environment. We consider everything from sound and lighting cues, stage action and seating plans, signage and refreshment service. We offer extra flexibility when booking seats, so if someone needs a little extra personal space they can request that the seat next to them remains unsold. A quiet room outside the auditorium is also available if anyone needs some time away from the crowd.

“People living with dementia have told us that they can lose confidence and find it more difficult to do the things they have previously enjoyed. We hope that by making some sensitive adaptations to the theatre experience, we can welcome people back to the Playhouse or encourage people to try it for the first time.

“Since 2010 we’ve offered creative activities for people living with dementia and their partners or carers. We enable people to explore and develop their talents and to be part of a fun and friendly group. Our Time and Peer Support sessions encourage creativity and imagination, rather than relying on factual memory. We explore characters, make stories, write songs and poetry and create beautiful art, influenced by our own lives and the world around us. All of this is inspired by our theatre and the creative processes of making our shows.”

To find out more about the theatre’s dementia-friendly performances or creative work with people living with dementia, please contact Nicky Taylor on (0113) 213 7296 or email nicky.taylor@wyp.org.uk