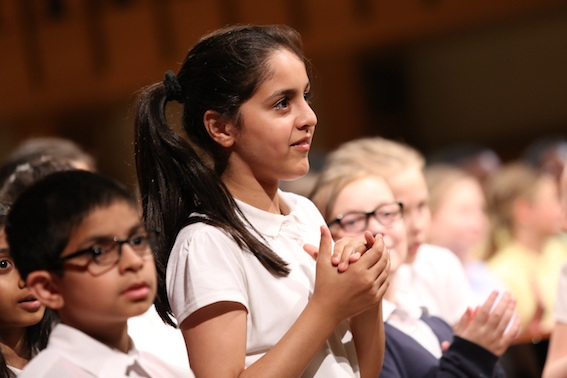 Over 600 schoolchildren, including pupils at New Bewerley and Windmill primary schools, are getting ready to take to the stage at various venues throughout Yorkshire this month when they perform Opera North’s Big Sing.

The pupils attend primary and secondary schools across the region. Children from New Bewerley Community School in Beeston will perform at Huddersfield Town Hall on Tuesday (13 June 2017) at 6:15pm, whilst children from Windmill Primary School in Belle Isle will perform at Ripon Cathedral on Friday 30 June at 6pm. Performances also take place in Wakefield Cathedral (12 June)and at The Dome in Doncaster (28 June). Earlier in the month, Hull schoolchildren joined in the celebrations with a Big Sing performance at Hull City Hall.

A chamber orchestra from the Orchestra of Opera North will accompany the young people taking part at each of the venues as they sing a selection of songs from Stephen Deazley’s A Little Book of Monsters, a light-hearted look at mischievous fiends in all their guises. The orchestral ensemble will also play excerpts from Prokofiev’s Peter and the Wolf with narration by Joseph Shovelton, fresh from his appearance as Pang in the Company’s critically-acclaimed performances of Turandot. David Cowan, Opera North’s Head of Music, conducts.

In preparation for their big day, pupils and teachers have been taking part in a series of school-based vocal workshops focused on developing and perfecting singing technique under the guidance of Opera North Education Choral Delivery Artists, Matthew Roughley and James Bingham. The final performances will be the first time the children in each of the areas have sung together.

“The Big Sing is a great way of engaging schoolchildren with singing while also giving them the opportunity to perform at a landmark local venue with a world class orchestra. The Yorkshire pupils have been particularly taken with this year’s monster theme and have worked really hard to master the music, some of which is quite complex.

“The children are now looking forward to meeting, and singing with, the pupils from the other schools and to being accompanied by the Orchestra of Opera North. The scene is set for a series of very special performances.”

Tickets for each performance are available for just £3 per person from the individual venues in advance or on the door.