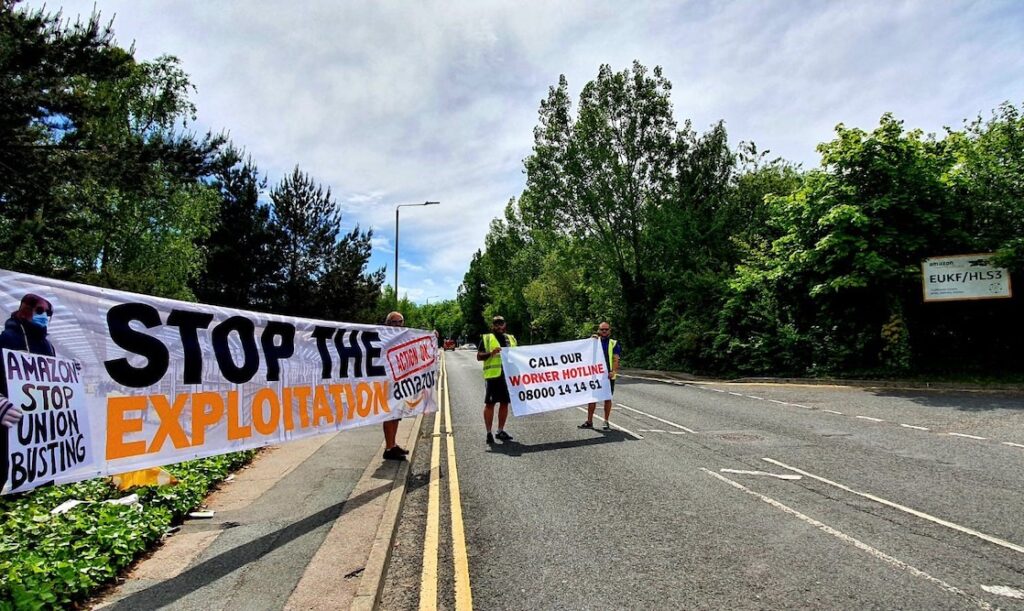 Campaigners unfurled a large banner at the Amazon HLS3 site on Middleton Grove in Beeston today (4 June 2021) to call on Amazon to sign up to a declaration which would guarantee workers the freedom to talk with and form a union without fear. The giant banner displayed the Union’s hotline number for workers.

Recently, Amazon reported that its first-quarter profit more than tripled from a year ago, fuelled by the growth of online shopping. Against a backdrop of reports about poor working conditions and anti-union tactics, Amazon workers have been essential during the Covid crisis.

Unite is calling on Jeff Bezos to sign up to a declaration of neutrality. Amazon tripled its profits off the backs of workers who are routinely prevented from having a collective voice in their workplace says Unite.

Unite has launched a confidential whistle-blowing hotline which has opened in the UK & Ireland. Amazon workers can blow the whistle and expose poor treatment free from reprisals by calling 08000 14 14 61 or visiting actiononamazon.org/hotline.

“Amazon’s profits have tripled off the backs of workers who have been essential during the pandemic. But the company continues to be plagued by reports of poor working conditions and anti-union tactics.

“Amazon workers are not currently free to join a union without fear, and without obstruction and propaganda being deployed against them.  Workers have serious concerns about issues such as bullying, mandatory overtime, intense surveillance, break-neck production targets and much more besides. Amazon workers need an independent voice to stand up against injustices in the workplace.

This post is based on a press release issued by Unite

One Reply to “Campaigners continue action on Amazon at Beeston depot”