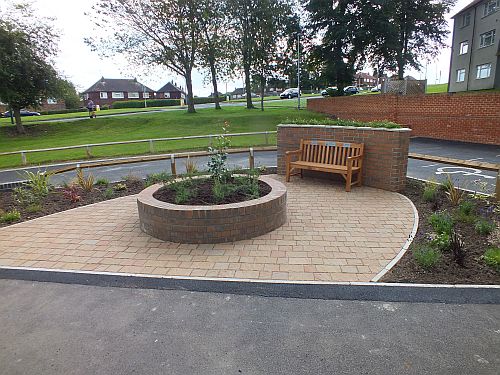 I arrived early to see many families where already gathering for the BITMO Fun Day. It was nice to see the children really enjoying themselves, even the constant drizzle did not dampen anyone’s spirits.

There is a vote in September for BITMO to continue looking after the rented council estate, on behalf of Leeds City Council. I’ve no doubt there will be a massive vote of tenants wanting BITMO to carry on looking after the estate. As did the vote five years ago, giving a massive 90% plus vote for Bitmo to carry on doing the same. Many of the staff and volunteers were wearing the Vote for BITMO t-shirts.

Jess managed to get me a vote for Bitmo t-shirt for myself.

I declined the offer by Kenny of changing into the t-shirt in public, as did not want ladies swooning at my feet.

Chris opened the Party by thanking everyone who attended public, staff, and volunteers.

Christine (board member) had a few words on the mike.

Maybe should enter it into the Chelsea Flower Show, next Year.

Looking around the various stalls, to begin with I notice a stand telling you if you have a cough for more than 3 weeks you can get an x-ray at various places in the Leeds area. Nearest one in the South Leeds area is St Georges Centre. Lucky for me I’m OK in that respect.

Next I talked to Rhonda Ward (Community & Membership Co-ordinator) of a group called,

Leeds Involving People. It is a charity based group and involves development of health and social care services. Please get more information on this at,  www.leedsinvolvement.org.uk/

Nice to see Councillors Grove, Blake and Truswell taking the time to have a look around and talk to people.

Giving out free food. I notice also a stand giving out healthy options, cups of fruit and slices of Melon. Again free.

Me, being a very healthy person, Lol, had a slice of Melon.

Free drinks of tea or coffee was on offer in the BITMO GATE Building for adults, children offered fruit cordial. Some took the offer of this, to take a break from the on and off rain showers. I must add nothing too bad and sun came out again.

Thanks to South Leeds Media, for supplying the PA system for Chris and Christine, to make their speeches and to supply the disco for the afternoon.

Many of the stalls kept the Children occupied; Hook a Duck is always a favourite as is Face Painting by Carla and Jess.

Jess and Carla looked brilliant with their faces painted  as clowns,

as did the many Children with their face paintings. By the end of the afternoon, don’t think many Children left without there faces painted.

Kept some children entertained. Many of the BITMO staff tried juggling; and plate balancing. Lynne and Ann don’t give up your day job. Lol.

Had a stall selling tombola tickets to raise funds for the much needed Scout group. When holidays over, going back to see Cubs finishing off painting the computer room mural in BITMOs GATE.

It’s also nice to take photos not mainstream at these events, so was nice to see small boys and girls climbing trees. Only doing what I did as a kid in Middleton Woods. Whether their parents thought so, I don’t know. Please see photo slide show.

Had an open van at the Party, giving out advice on their group, based on Middleton Road, Belle Isle. I went to the Hub a year ago to report for South Leeds Life and see Battle of the Bands. Massive building with recording facilities. As well as other actives to keep youths occupied.

Always a favourite. Nice to see children taking their shoes off before going on. Even one grown up lady having a go, glad she took her high heels off first.

Ian giving out leaflets about the Gym facilities and a cycle trainer machine available for people to have a go at getting fit. Ian offered me a free day trial. Will take him up on his offer, soon.

Did a fantastic dance routine to the disco, well done them.

After 4 hours walking around took a rest in the BITMOs GATE building to make my notes for this blog and listen to the Lady Singer.

No singing though, totally instrumental, I liked that. One of the guys can be seen in the BITMO Building playing his guitar from time to time. He also teaches Guitar playing at the centre.

As a teenager, used to play the guitar and drums. Would not know where to start, nowadays.

After a rest and cup of Coffee, went back outdoors again, Stalls were packing up for the day.

I’m sure everyone enjoyed a very lovely afternoon. I know I did.

Can you see the little boy in the Tree?

Although Photos in this blog are my Copyright, ©. I give permission to be used elsewhere.

All I ask is please do as BITMO have done, and attribute the photos to me. Thank you.

See you all again at the Middleton Park produce show in September.