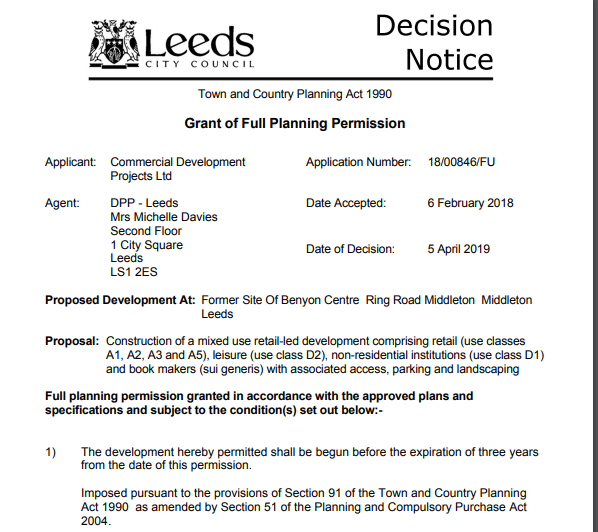 The controversial new multi-purpose retail site on the former Benyon House in Middleton has been given the green light despite concerns over its effect on the current Middleton Circus and District shopping areas.

As we reported previously, the Council’s South & West Plans Panel went against officers’ advice to approve the plans.

Full Planning Permission was granted in April 2019, and has mainly slipped under the radar of most South Leeds and Middleton area residents. The reason for the planning approval has been given is due to the benefits seemly outweighing the drawbacks in the eyes of the planning committee. The following statement was released with the approval:

“At the Panel meeting on 20th December, in considering the application, Members placed greater weight on the benefits of the scheme in terms of economic development, regeneration, increase in retail offer and job creation, and considered these benefits outweighed the any harm the proposal would have on vitality and viability on Middleton District centre. Members also considered the proposal has the potential to boost trade at Middleton District centre, by new linked trips. The economic and regeneration benefits are material planning considerations and valid reasons to approve the application, contrary to the advice of Officers.”

No new work has yet begun on the site.

The new development is due to host Lidl and B&M stores as well as a Starbucks coffee shop.