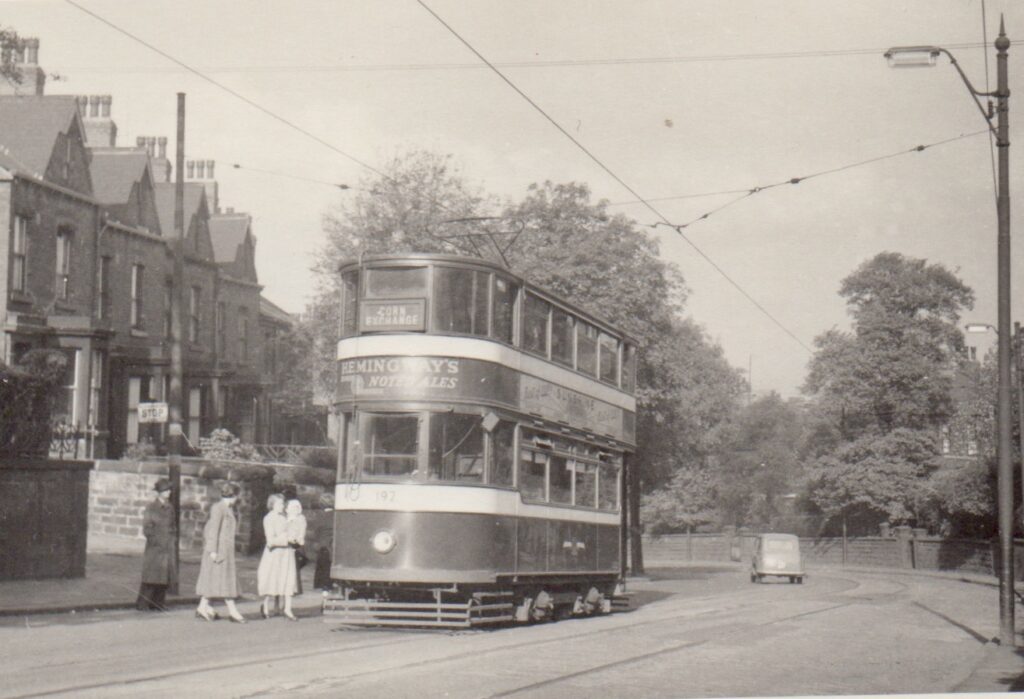 On the cover of October’s South Leeds Life there was a great picture of a No 1 Beeston bus passing the top of Sunnyview Gardens, anticipating the return of the through service to north west Leeds which had been broken at the end of August last year. I started to reflect on how, during my lifetime, Beeston has been linked to what we all call ‘Town’, and beyond. Suddenly, I remembered that 19 November marks the 65th anniversary of the closure of the No 5 tram service which had been operating for 54 and a half years.

The conductress of the last Beeston tram interviewed

After a look at my transport scrapbooks (1951-63) I had found some information. In the YEP of 15 Nov there had been an article entitled “Crew of last tram sorry to leave friendly route”. I’ll quote large sections of it.

“On Saturday the last Beeston Tram will leave from the Corn Exchange at 11:28pm returning from Beeston at 11:46. Its driver will be Mr Wilfred Jones, Moorside Road, Bramley, with Mrs Elsie Hackman, Woodview Mount, Dewsbury Road as his conductress. Both will be sorry to leave the route. Mrs Hackman said today “I like everything about the route, – I don’t even dislike the scenery – I was born and brought up there. I’ve never had any trouble, even with the drunks. Why is it so friendly? Maybe because so many old folk live there. They are such considerate passengers. The first run out of the depot has been at 4:18am. A lot of people travel early in Beeston – mostly postman on the first tram. And they are a happy lot, too even at that time of the morning.”

In November 1955 I had just started as a student in Sheffield, and so, on the 19th, I caught a tram from my ‘digs’ on the Firth Park via Pitsmoor route (they didn’t use route numbers in Sheffield) and at the Midland station I caught a train to Leeds and a No 5 tram to home. In the afternoon a friend from Marsden Grove, Graham Harker, and I walked to Beeston terminus (alongside some old cottages near the present bus turning circle which appeared months later), and for 3d went all the way to Vicar Lane where cars for Beeston reversed at the crossover outside the Cashdisia stores. In the evening Dad, who was deputy chairman of the Transport Committee, and I went up to the terminus to board the last car (No 240). We got off at Folly Lane and watched 240 until it disappeared round the bend by the Golden Lion.

The construction of the line to Beeston. Quite a saga.

By the end of 1899 the rails up to Beeston and along Elland Road had been laid. Horse cars displaced from already electrified routes could be used, but not up Beeston Hill. Reconstruction of the bridge over the railway and the need for a further generator at the power station caused delays. In January and February 1901 standards and overhead wires were erected and on 13 March the members of the City Council’s Transport Committee had a test run. So the first passengers were carried on 18 March 1901. Trams from Beeston were running Meadow Lane, Briggate (lower part), Duncan street, New Market Street and Vicar Lane through to Woodhouse Street and Hyde Park. A month later, 19 April, trams started running from Elland Road to Meanwood, via Briggate at first, but soon afterwards via Vicar Lane. Note that this tram, then bus, linkup has been maintained consistently for just short of 120 years. An inconvenience at Beeston was the narrowness of Town street beyond Silver Street, necessitating a long length of single track. It took until 1942 to resolve this. When Town Street was widened to the line of new houses, part of the Oldroyds, the extra track could be laid.

Frequency of the 1901 service

Every 20 minutes to the terminus, 10 minutes to ‘Park Gates’ and 5 minutes to Malver Road. A siding for these cars was built in Lady Pit Street (part of Malvern Road since the 1970s), alongside the Methodist Church. The rails, later disconnected, could still be seen in 1945!

Major Pringle from the Board of Trade

This gentleman came to inspect the new routes on 4 April 1901. He insisted that on the downhill journey from Beeston there should be two compulsory stops: the first at Cemetery Road / Tempest Road and the other at the end of South Ridge Street. (There’s a big tree there at the moment opposite the African supermarket). He said that all the trams on the Beeston route should be equipped with a mechanical track brake. So, for Beeston the foreman at Swinegate depot had to allocate a suitably equipped car. At South Ridge Street the driver turned a vertically placed wheel attached to the handbrake column (driver’s right hand). This action moved the track brake down to within a whisker of the tram rail. Then, if anything serious happened on the gradient below the driver could easily clamp the brake down onto the rail. At the Folly Lane stop the brake was raised again. (I often wonder if there ever was an emergency!).

There were four other locations on the network where this process was required: Richardshaw Lane, Pudsey; Whitecote Hill, Bramley; Wood Lane, Rothwell; and Churwell Hill. After 1938 Beeston Hill was the only one left. On 23 May 1923, there was a very serious accident at the bottom of Churwell Hill, when the driver tried in vain to apply the track brake. The tram ran away and overturned.

Frequency in the 1950s and city centre boarding points

One afternoon after arriving home from West Leeds High School, I took pen and paper and installed myself on a bench on the common, opposite the Park Fisheries, and checked on the trams as they headed towards Town. It soon became clear that there was a sequence which repeated itself every ten minutes. Five trams came along every two minutes. So every ten minutes there was a No 3 for Harehills, a No 6 for Meanwood, a No 5 for Swinegate and two No 5s for ‘Corn Exchange’ (i.e. Vicar Lane, Cashdisia). By now some trams could not show a number for city centre destinations, overall frequencies to Harehills were higher, as many cars ran from Briggate, and also to Meanwood, because all trams from Elland Road went there.

Where to catch the Beeston tram

From the city you could board for Beeston outside the West Yorkshire bus Station ( Vicar lane) but at certain times of the day or week there was no service . The main barrier (queuing point) was in new Market street, in a cramped space, until , in 1949, hoardings were removed to reveal a now façade, which we still have, complete with enquiry office, now closed and newsagents.

In October 1953 we moved further down New Market Street. The new, but short-lived, No.5 bus stopped there too. Peak hours were extremely busy but a few brave souls boarded at the next stop in (Lower) Briggate opposite Dyson’s, and often had to wait as cars came past full. You could alight at Dyson’s on your arrival in town, but not board for Harehills or Meanwood. They only picked you up at County Arcade, the next stop.

For years you could catch car s for the Park Gates and Beeston, at peak hours, in City Square until 1937. Starting in 1939 the ran via the Swinegate and Mill Hill stops, and, from1951, only from Sovereign Street. The No.5 bus left from there, and continued to run for several years after the start of the Lawnswood and Beeston No.1 service. In those days there were three peak hours. Frequencies were improved between, say, 11:30am and 2pm too.

A final fact that few know

In 1955 when buses for Cottingley were linked with those for Morley it meant that the No 29 would have to turn at Holbeck Moor. Dad suggested that it could run up Cemetery Road and join up with the 48 from Beeston to Middleton – a rather isolated bus route. The result was a huge and rather unexpected success. But there’d been a bus to Beeston before! In the 1930’s some No 7 trams from Beeston at peak hours ran via Victoria Bridge and City Square ro Burley Road, where many South Leeds folk worker, and Headingly (Victoria Road) . the Burley Road trams stopped running in may 1937. There was a big protest from workers from this side of the river, who now had to change in town. Eventually, after over a year, in July 1938, a bus route 66 was introduced for Monday to Friday peak hours, running from the end of Old Lane via Meadow Road, Victoria Road, City Square and Burley Road to North Lane, Headingley. However, with the outbreak of war fuel oil had o be conserved and the 66 ceased operation after 14 months. At the Beeston end it was replaced by a new peak hour service of trams to Swinegate and Mill Hill (to City Square).

Some Beeston folk are proud to have the No 1 bus. But it’s not really our property. This number was given to the Lawnswood tram route in 1929 and they’ve had it ever since. At one time in those crazy days following deregulation, the No 1 went, not all day, from the Lawnswood area towards Vicar Lane and continued to Dewsbury Road, Tempest Road, Wesley Street to Cottingley. At times our No 1 has been a half -and-half 1 and 4, 1 and 96 and 93 and 96. Eventually it was back again . And now it is a second time.