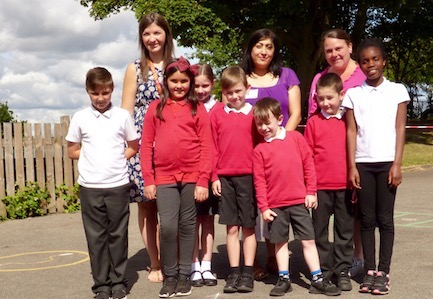 The Friends of Beeston Primary PTA have launched Operation Playground with new games markings at the school.

Claire Burgess explained that their ambition is to transform the outdoor space at Beeston Primary over the next three years. They will be launching a £30,000 fundraising drive in September, but were able to make a start before the holidays with generous support from DHL.

The PTA discussed their plans with the School Council who took the ideas back to their classes for discussion. Eventually the children settled on two designs they ‘couldn’t live without’ – a Rounders pitch and a dance with me motif. These are supplemented with other designs including number grids, an adventure trail and a rocket hopscotch grid.

The designs were laid out and burned onto the playgrounds on Monday (26 June 2017) and members of the School Council were on hand to inspect the work and learn more about the process. Asked what they thought of the improvements, one lad piped up in true Yorkshire style “Not bad.”

Chair of the PTA Zara Hussain commented: “It’s great this work has started now so that the children in Year 6, who have been so involved, see the work before they leave school next month.”