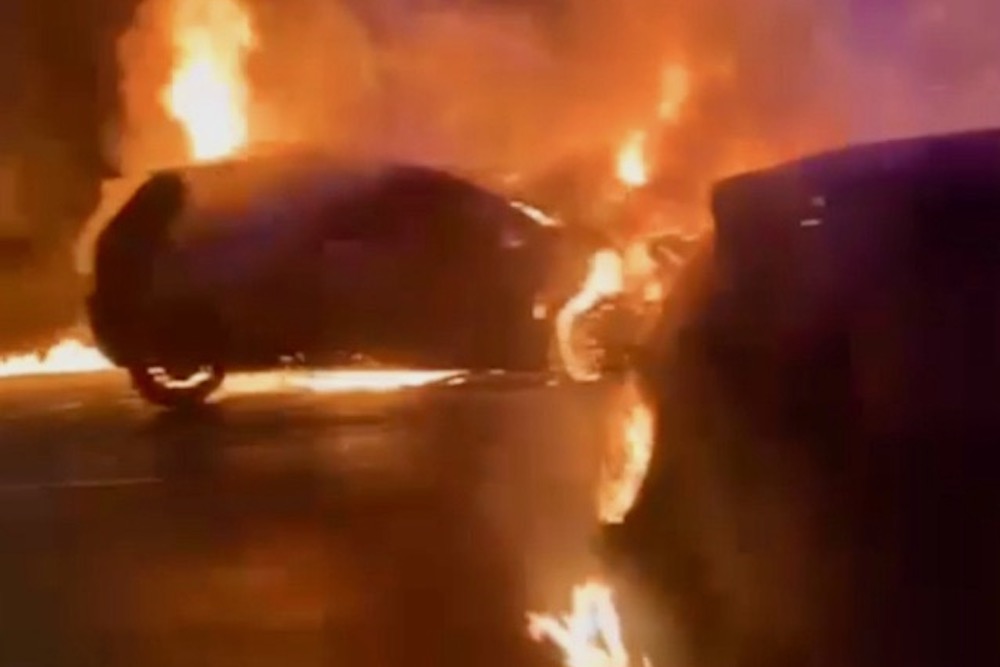 Residents in Beeston are being asked for information to help stop a series of recent arson attacks on cars in the community – but some of the victims have also expressed frustration at the apparent lack of response or action from the Police.

The past months have seen an unprecedented number of arson attacks on cars, always late at night, across Beeston. They have taken place at locations including Greenmount Terrace, Sunbeam Terrace, Lady Pit Lane, Maud Avenue, Lodge Lane, Robb Street, Dewsbury Road, and Oakhurst Avenue; several of the incidents have featured multiple cars.

West Yorkshire Police have eleven logged incidents, but it’s unclear if every event has been reported or not.

CCTV footage of one of the incidents shows what appears to be a small group of hooded young men quickly pouring flammable liquid over the cars, filming themselves all the while – then setting it alight (and nearly getting caught in the explosion), and running away. Footage from another incident shows a young man (apparently white Caucasian) cycle up to a car on a mountain bike, again pour flammable fluid on it, before lighting it and pedalling away.

West Yorkshire Police say they are treating some of the incidents as linked. But whilst there are suggestions circulating locally that some of these have been targeted attacks – relating to community or criminal feuds – several victims insist that they are completely in the dark as to why it happened to them.

“We and our neighbours had our cars burnt up, it was shocking, and we now feel really unsafe. We have no clue who it was, or why we were targeted: we don’t cause no trouble, I’m alright with everyone around here. But we need something doing about it, and we as the community need to stick together.”

“We’ve lived in Beeston for 15 years, and love this community. We’ve been shaken and unsettled by this, but it won’t put us off seeing the good and hope in the area.”

“I’ve lived in Beeston all my life, but this put me and my family in serious shock. We’re depressed and scared: is it racially targeted, and will they attack our house? I just live my life, I’ve volunteered to help local young people, I try to be there for people, and I’ve never had trouble with anyone. The Police said they’d come back to me after the incident, but never did. No-one’s interested, they see it as normal here – but if this happened in Shadwell or Adel, they’d be straight on it. It’s not good enough”.

Other residents also shared with us their frustrations about the apparent lack of Police attention.

“Officers are aware of a number of incidents of criminal damage by arson to cars within the Beeston area. Enquiries remain ongoing to identify those involved and establish the circumstances of the offences. We treat incidents of this nature seriously and we will continue with our patrols in the area. I would encourage anyone with information who can assist in our investigation to contact 101, particularly if you have any CCTV footage that can assist.”

If you have any information related to these incidents, including any insights about who the perpetrators might be, contact 101, or online via www.westyorkshire.police.uk/101livechat quoting crime reference 13220029002. Or you can share information anonymously via Crimestoppers, on 0800 555111.

Causing criminal damage by fire is a very serious offence and carries a sentences of up to 8 years in prison.
Overall crime levels are falling in West Yorkshire. Figures published by the Office for National Statistics last month showed the number of victims of crime had fallen by by 1,347in the year to September 2021. Robbery was down 17%, house burglary down 26.9% and vehicle crime down 18.9%.

You can find out more about crime in your area using the interactive Crime Map at bit.ly/LdsSthCrimeMap

*Names have been changed throughout, to protect the anonymity of victims and witnesses.

South Leeds has its fair share of trouble, but over and over again it has also shown itself to be a strong community. We pull together when we need to and there are a lot of good people making good things happen. These incidents – committed apparently by a very small group of people, who might or might not be local – do not define us.

The hard-pressed police meanwhile need our help. We encourage all residents to share all the information they can.
Together, we can stop this nonsense, and get back to building a safe thriving community.

2 Replies to “Beeston car fires: we can stop this”