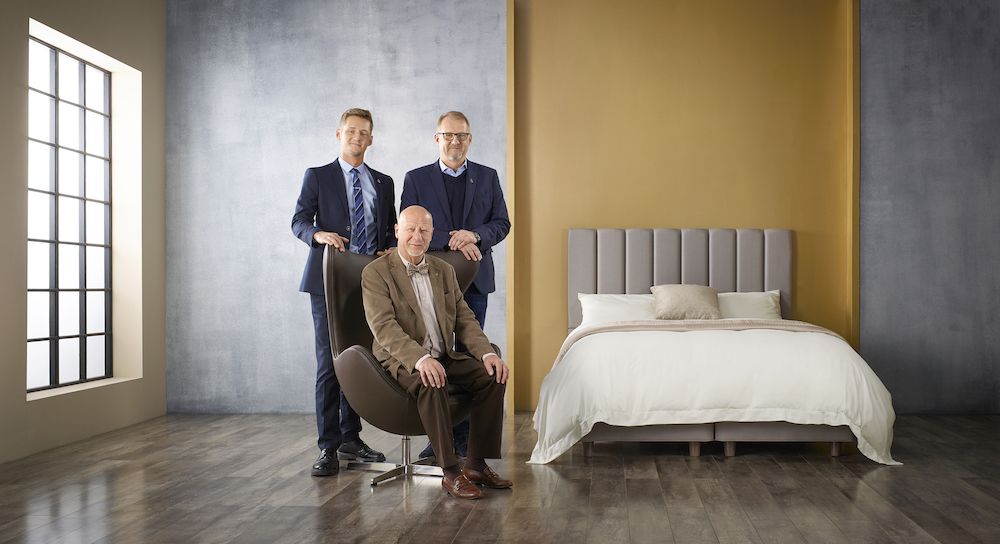 The company, which manufactures luxury beds at its factory off Dewsbury Road in Beeston, was granted the award in recognition of a number of ecologically friendly innovations which make the mattresses and beds it produces and the process by which they are created more sustainable. This includes reusing waste from the production process, replacing synthetic materials with natural, recyclable products and reducing CO2. The company believes it is the only furniture maker to hold three Queen’s Awards and the only specialist bedmaker to win the Sustainable Development award twice.

“We’re delighted to be granted another Queen’s Award for Enterprise and are honoured that the efforts we’ve made to make our business more sustainable have been recognised.

“We take our responsibility to act sustainably very seriously and we’ve been proud to challenge the market to make beds and mattresses in a different way, avoiding the need to use chemical products like foams that are difficult to recycle.

“We’ve worked hard to diversify our business to become one of the most vertically integrated furniture makers in the UK and this has helped us look at the way we run our business and reduce reliance on non-recyclable materials, waste, energy consumption and CO2.”

How the award was won:

Harrison Spinks was granted the Queen’s Award because of a number of innovations which make the company and its products more sustainable:

Harrison Spinks has created alternatives to chemical and non-recyclable products for use in its mattresses. This includes development of pocket spring sheets and natural filling pads which negate the need for foam in its products.  Harrison Spinks invented micro-pocket coils which avoid settlement issues associated with natural fillings, making a viable alternative and reducing the need for synthetic foam products.

Natural filling pads have been developed to replace foam (and even wool and cotton) with hemp and flax fibres. The new filling pads reduce CO2 produced per mattress by 83 per cent and mattress filling material weight by 36 per cent – which in turn reduces transport costs.

Growing hemp for commercial use has other benefits – for every acre of hemp grown, one tonne of CO2 is absorbed: together with local growers Harrison Spinks produces 300 acres of hemp so 300 tonnes of CO2 are absorbed in the process.

The waste products from hemp processing are shiv and dust, which Harrison Spinks sells as animal bedding and briquettes which are burnt as bio-fuel. The biofuel is used to fuel the Harrison Spinks farm’s biomass boiler and the remaining briquettes are sold externally, including to a local power station which uses them as a coal power substitute.

Harrison Spinks has invested in weaving equipment at its Leeds HQ in order to develop inherently flame-retardant viscose fabric, removing the use of 500kg of chemicals per year.

Harrison Spinks partnered with British Steel to develop a new grade of steel rod which allows a finer gauge wire than traditional wire drawing methods. This produces lighter spring pads and results in a weight saving of 54% of steel per mattress compared with those with standard components. This reduces transport costs and uses less raw material. Harrison Spinks has also opened a wire-drawing line at British Steel’s plant in Scunthorpe which means that steel waste from the wire drawing process can be immediately recycled on-site, creating closed loop production.

The company has also made various innovations to the way mattresses are made to create more sustainable products that are easier to recycle. This includes development of a machine that makes pocket springs in a way that removes the need for glue. The next big challenge on the horizon is creating a completely recyclable mattress that will reduce the amount of product going to landfill at the end of its life.

Over 600 companies applied for Queen’s Awards in 2019 with 201 being granted an award. Just six companies were awarded the accolade for Sustainable Development.

Harrison Spinks employs 600 people in South Leeds and all of its products are made in Yorkshire.