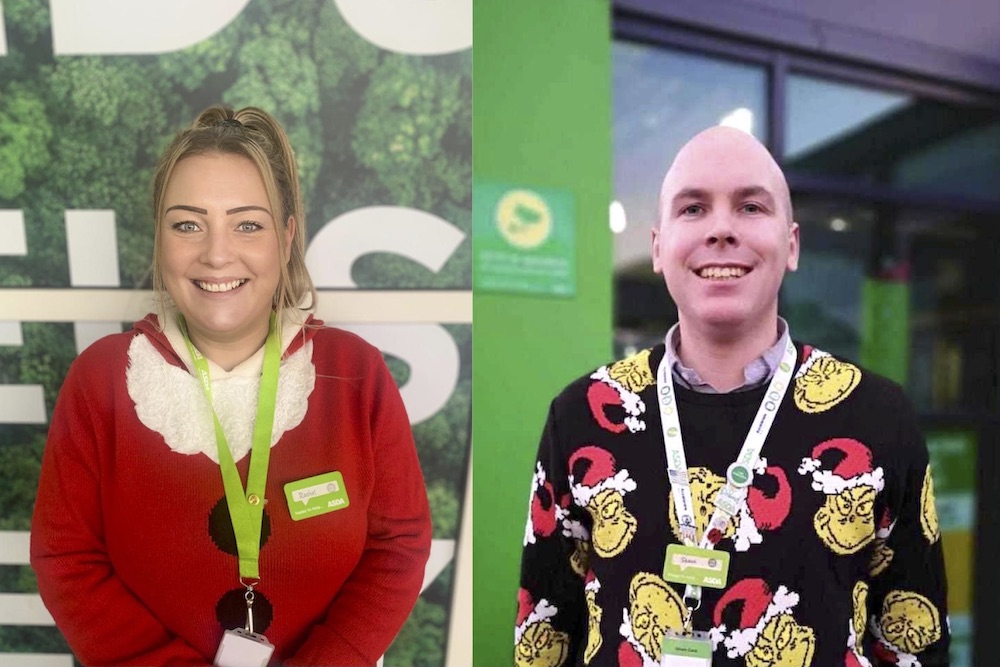 Two members of staff from Asda stores in Middleton and Beeston have been singled out for praise for their selfless actions.

When Rachel Cunningham saw a homeless man sitting outside in the cold by the store in Middleton she just knew she had to do something to help him.

After getting him a hot chocolate and a slice of pizza from the store cafe, as well as buying and filling up a hot water bottle for him, she contacted a local homelessness group and got him shelter for the night – and he’s now getting assessed for housing.

“I’d just popped outside to get another trolley for our food bank donations when I saw him sitting on the ground. I knelt down and had chat with him and learned that he was living in a tent and he was hungry.

“It was very cold so I got him some hot food and a drink and filled up a hot water bottle for him and then, using my community contacts, got hold of the homeless outreach team who managed to get him a bed in a hotel on the other side of Leeds. I couldn’t just walk by – no way. I don’t think anyone should be homeless, not in this day and age.”

Store manager Hugh Clarke says he and his colleagues at the store are “mega proud” of her actions:

“She bought hot food for the man out of her own pocket and then took the trouble to phone around the homeless shelters in Leeds for him. I don’t think a lot of people would do that, but that’s just the sort of person Rachel is. It was an amazing act of kindness.”

Meanwhile over at the Beeston Old Lane store kind-hearted Shaun Brett is always happy to help customers however he can – even personally delivering shopping after finishing work and calling round to help a partially deaf and blind customer set up a new TV she’d bought.

On one occasion recently an elderly shopper on a mobility scooter came into store wanting to buy tubs of chocolates but, having no immediate family nearby, had no way of getting them home, so deputy manager Shaun delivered them to her home after he finished his shift.

And another time a partially blind and deaf elderly customer phoned up to say she’d bought a TV from one of our stores and she couldn’t get it to work so Shaun called round on his way home and fixed it in no time!

“I’m just down to earth. When customers need assistance, I like to help. I’m a big believer in giving back to the local community. It’s the right thing to do. Sometimes these people have nobody else around to help them.

“The lady with the chocolates could not thank me enough. She really appreciated it but I’d do it for any customer, especially in these unprecedented times, but that’s just me. I like to see myself as a good humanitarian.”

“The customers in store love him and he does everything with a smile on his face. He sees this as part of our responsibility in the community.

“He’s a really, really kind and caring person who puts everyone else before himself all the time. He sacrifices his time for colleagues and customers. He has a massive heart and we are all proud of him.

“When the elderly customer couldn’t get her shopping back Shaun just said to her ‘I’ll get it to you.’ He’s not from Beeston so he used his Sat Nav to find her house on his way home – which is 28 miles away – and that’s all after a 10-hour shift.”

Both Rachel and Shaun have been nominated for an Asda award.

This post is based on a press release issued by Asda

2 Replies to “Asda staff going the extra mile this Christmas”