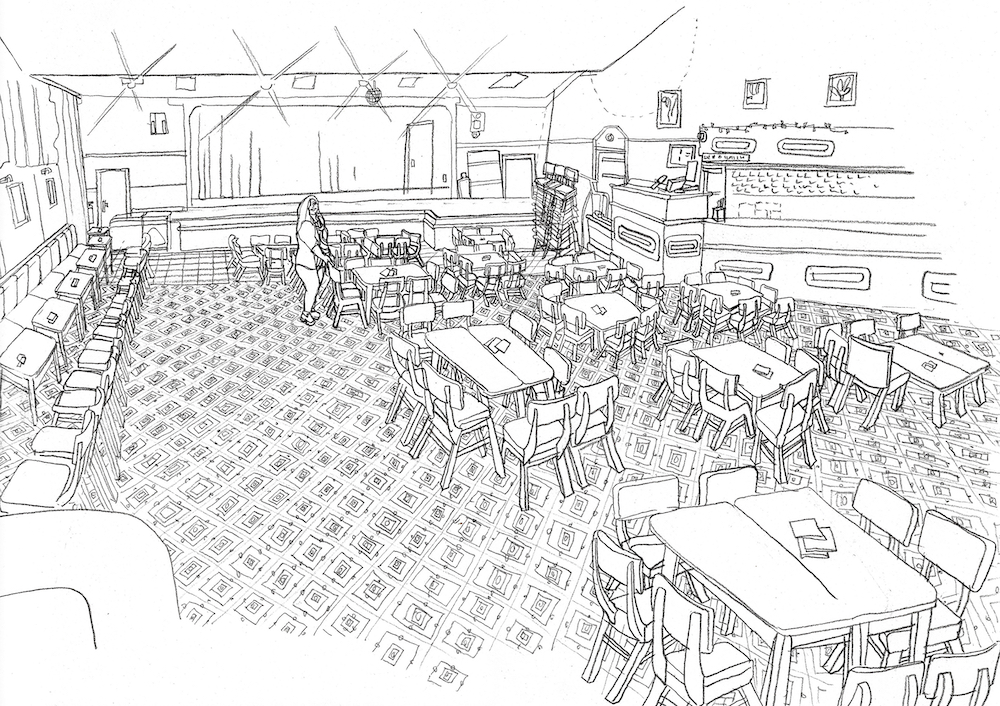 Artist’s House 45 has seen a number of artists pass through it over the years; some of you may remember the monthly ‘Trajectory of the Everyday’ column by Lloyd and Wilson from the pages of South Leeds Life. Over time, the artists that have engaged with the house and its concept, as a space in which they can both live and work, have found different ways in which to engage with the various communities within South Leeds.

The most recent incumbent has been Silvia Liebig, an artist from Dortmund, Germany. As with all of the occupants of the house Silvia has been seeking to make contact with different communities that exist within the Hunslet, Beeston and Holbeck area of South Leeds. Although now back home in Germany after a two-month residency here, I interviewed Silvia about her time spent at Artist House 45 and her project as it related to the communities within which she had been working:

BD: So, how did you enjoy your time in South Leeds, what stands out in particular for you about your time spent here?

SL: In fact? I suffer a bit of homesickness about Leeds, and Beeston in particular. Yesterday I went to an opening at the “Kunstverein” (art Association) in Dortmund and there was an artist whose particular accent I immediately identified as something familiar – it turned out, that he originally came from this region in England. I was literally hanging on every one of his words.

I got to know the kindness of the people in this area. I really loved the fact, that people say “Goodbye and Thank you” to the bus driver when leaving the bus. I was dismayed to see that the microplastic production in this area is enormous (objects that become litter and over time are broken up again and again until they are just tiny shards of plastic) because the adolescents do not know how to channel their quite understandable aggressions into productive channels.

(BD: There is a thing called broken glass syndrome which says that if someone smashes something like a window or phone box in the street and it does not get repaired reasonable quickly, then quite often other street furniture nearby ends up being similarly damaged because of what is felt to be a lack of care and attention to the environment.)

I experienced the different sorts of beer and the rich choice of different kinds of food, for example polish Royal Cheesecake and a Vietnamese burger called Bao. I was encouraged to create a lot of strange ideas because of not knowing what they were for instance the “Mira Sport” (hot water boiler) in my bathroom.

At the beginning, as a person coming from abroad, there was a certain distance between myself and the new environment based on the different languages and everyday rituals, the detachment from social networks and geographical orientation. That sharpens the senses 😉 There was also a lot of things that I recognised, and there is something funny about that; it doesn’t matter if things are good or bad – these peculiarities helped me develop an emotional bond with the environment.

BD: Well I know where the Polish cheesecake came from but the Vietnamese Burger! Where did you get that from?

SL: A friend brought it from the Kirkgate Market – there is a vietnamese Imbiss (BD: snack bar) in the corner of this place, where you can sit and eat. I adore every single one of its dishes. But Bruce, did you ever taste “Koreczki sledziowe z czosnkiem” (fine sour pickled herring with garlic) from the big polish supermarket “Syrenka” at upper part of Dewsbury Road – amazing! Or do you know “Momordica charantia” – you call it “Native bitter gourd” I think. It is a slightly bitter vegetable you can prepare it very delicious. You can get it at the “Abu Bakr” Market.

BD: I feel ashamed to admit to not having tried any of those things despite having lived in this area. My taste is quite diverse, but this shows me as quite stuck in my ways. I shall make it my goal to try these things by the time we next meet. In terms of your hometown of Dortmund, which I have never been to, and South Leeds would you say there are any things in particular that connect the two regions in terms of the environment, economy, community?

SL: Well, for example, the somewhat rough but straightforward way of dealing with each other, if you’re not at your job, and also a kind of instinctive mistrust in authorities because one has experienced ignorance -or worse- a top down attitude. A lot of people in Dortmund (which is part of the Ruhr Valley) or their ancestors (coming from Poland, Italy, Turkey …) worked as coalminers or steelworkers (similar to this area). They are proud, they don’t want to have charity, they want to have opportunities, chances, aims. They want to sit at the same table and be involved in the process of developing ideas about changing their situation.

Dealing with art is not necessarily natural but I made the experience, talking about the process of how an idea or a piece of art develops to create and assist communication – the first step to becoming interested. Often the problems that have to be solved are the same no matter whether they have to do with an art project or everyday life.

And the beer of course! It is like an artist friend of mine (Sabine Held) said: “Beer is some kind of cultural glue”. Come over to Dortmund, Bruce and have some pints with me!

But Leeds is far more beautiful than Dortmund because it has these great Victorian buildings. But here it rains lots more …

BD: So, in terms of Artistic practice, you have spent a lot of time putting pen to paper in the form of drawings and portraits in particular? Do you want to talk about some of the places and people that you have met in the area that have made their way into these drawings?

SL: It hasn’t only been a thing of pen and paper but also of sound, because I did a lot of interviews too.  For me it is like a rush to get to know the world through another person’s “filter” (including his/her reception, memory, experience, senses and cultural background). To get an idea of how other people “work”. How they explain the world and organize it for themselves. But you have to have time for that and the will to listen.

You know, that is the wonderful thing about artist residencies (like the one East Street Arts offered to me). They buy you time to work carefully and patiently on an idea, that allows you to do experiments or to make mistakes (you learn a lot from mistakes, sometimes they are the starting point of a better idea or technique or procedure).

So, at the very beginning I was just strolling around, chatting about things with people I met by chance, for example in the bakery, the supermarket, on the bus or in the park.

One day I met Mickey Mouse (not their real name, because I offered everybody the chance to remain anonymous) in the Laundrette. He explained the manual of the washing machine to me, we talked about jobs, while drying we started talking about past and future and “what holds the world together inside it” And after several visits MM allowed me to transform him into a character for my project.

The same happened with some people at the Roland Road Working Men’s Club. They taught me how to play bingo and told me a lot about the history of the working men club.

And then at some point -I am sure you know this by your own working experience- suddenly everything is connected and becomes more than the sum of its parts, and then you know what you have to work out. In my case it will be a so called “comictravelguideinterviewpaintbook”.

BD: Now that you are back in Dortmund, how do you view the time that you spent in Leeds and do you see yourself returning to the area of South Leeds should the opportunity arise? Will the “comictravelguideinterviewpaintbook” potentially be a part of being able to do that?

SL: I would love to, because all these drawings, the interviews and sounds, the gourmet discoveries, the artist challenges, the map, the philosophical excursions – all of the materials that have been collected or developed with the help of the communities around Beeston, Holbeck and the city of Leeds have to become more than a collection of loose papers.

I am thinking about creating a book out of it, but to do this it needs a bit of a distance and another intense working period. It would be amazing to see, how this “Book” could become a starting point for artists or other creative people; and there are still so many paths to follow … so keep your fingers cross and let’s see!

Bruce, what about the “SpecialRubbishSuperHeroPower” Characters you are going to develop with the little ones of your ESOL Group – I have already drawn the adventure playground on which they can practise their special forces?

BD: Hahaha as you have turned the final question to me; I shall explain to the reader first that as BasementArtsProject, I am involved with providing art projects for a group of small children in South Leeds as part of an English as A Foreign Language group for adults. I can confirm at this point that, this week we started developing some superhero characters after the conversation we all had the week before you left. As soon as we have some material, we will start sending you some pictures for the playground and developing a further story. Here’s to future collaborations between, not just us, but Leeds and its twin city of Dortmund in whatever form they may take!