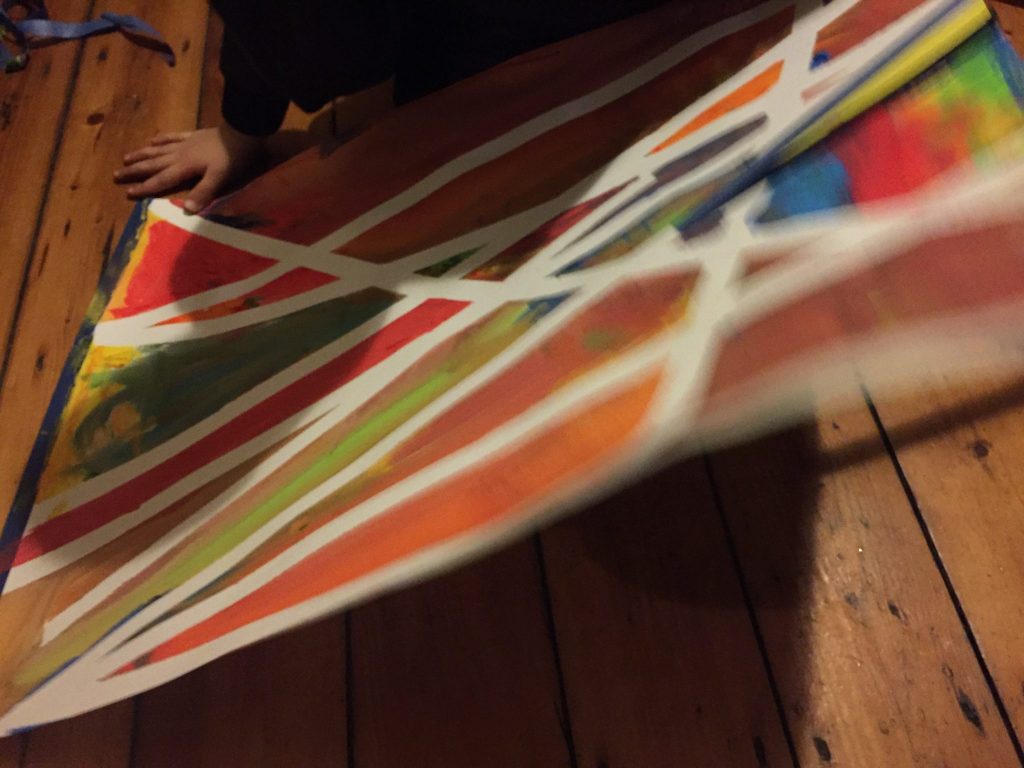 In September 2017 I was invited to take part in an ESOL (English for Speakers of Other Languages) group with St Luke’s Church in Beeston South Leeds; my role within the group was to organise the children in some kind of art based activity. The group itself was made up of refugee families from Syria, Afghanistan and Iraqi Kurdistan, and the ages of the children ranged from three to eight, or thereabouts.

Over the course of the last twelve months, I have spent two hours every Thursday after-school during term time with these children, listening as they tell stories of their homelands and their adoptive land as refugees. These sessions were as instructive for me as they were for the children, as I listened to them sadly recount stories of having to leave their homes, forced to flee to even less certain futures on foreign shores. Some of the smaller children spoke about looking forward to a time when they could return to their homes, whilst some of the older children talked, in a surprisingly sanguine manner about how the war had destroyed all that they once had and there could be no going back.

Reflecting upon their condition as both children and refugees in a post-Brexit landscape, fraught with opposition to incomers; whether white European, African or of Middle Eastern extraction, it is difficult to imagine how life must be for people who have already lost so much. South Leeds is an area of high density population, economically in the lowest 1% of the country and currently undergoing a major increase in social housing. The perception, rightly or wrongly, is that much of this is being given over to refugees, which has led to an increase in the frequency with which you hear complaints about ‘them’ getting preferential treatment over ‘us’, by which I assume the commenters mean people who have been here for a long time, already on waiting lists for housing, renovation and such like.

Over the last decade we have seen much change in the world particularly as a result of conflicts in the middle east and this has, without doubt, impacted on political decisions made at a local level. The problems of the world are undoubtedly the problems of local communities too, the real challenge is correctly identifying and challenging the source of those problems. The polarisation of opinion, and seemingly behaviour in societal terms, at a local level seems to have stemmed from a number of seismic events in global politics, resulting in an ‘us’ and ‘them’ attitude being pushed further forward in people’s consciousness. To take this viewpoint though, I believe, misses the point and allows the people behind the problem off the hook, that is to say the politicians and big businesses that actively pursue endless wars in favour of the national economy, which strangely seems to bear little relation to local economy, but that is another line of enquiry. To this end it is important that people work together to strengthen the community against the shockwaves caused by the larger picture. At a local level we are all ‘them’.

It is with sadness I note that a gentleman, whom I now know to be called Jason, mentioned in a recent post, living beneath the Neville Street arches in a tent for quite some time, recently passed away. In my fairly regular conversations with him over a period of about six months until his death, he never once complained about his situation but always talked of how protective he felt over those who like him wound up, through no fault of their own, on the street. It was an awful moment explaining to my eight year old son, who also regularly chatted to him, who the flowers were for. He exclaimed with genuine sadness ‘Oh no! not best homeless guy ever!’

Sometimes it is hard to remember that I am meant to be writing about the arts, but living as I have done in South Leeds for the best part of twenty years, I think it is important to remain connected to the continual cycle that impacts upon our life. Regardless of how we go about the daily grind of trying to make a living we must always acknowledge the living, and dying, that goes on around us and do our utmost to make this place a happy one. There are many things in life that we would like to change, things that we can see are wrong or harmful; but in acknowledging the gap between influence and concern, we can take steps that may one day widen the sphere of our positive influence.

So to end, as we began, on an art related note: in September BasementArtsProject will be working with the artist Naomi Gilby on an exhibition about growing up in a northern seaside town, namely Blackpool. This exhibition will feature several photographic works, sculptures that emit scents and a soundscape that all evoke life in a coastal town.

The exhibition will also initiate a related project with MAP (Music and Art Production) based on Mabgate. For the past decade MAP have been working with young people at risk of exclusion from school. Alongside classes in Maths and English MAP provide experience in creative industries; music, art and design, aimed at young people (11-16 yr olds) struggling within the traditional school system. Over the course of the project Gilby will be working alongside BasementArtsProject and the tutors at MAP on a remix project. The soundscape that will accompany Gilby’s exhibition will be handed over to the students of MAP who will then produce four remixes of the work. This work will be turned into a one-off vinyl piece for their archives, the MP3 sound files will then be made available to buy online afterwards. Money raised through the sales of the remixes will go towards the fund raising project that MAP are currently engaged in as they try to secure their future through the purchase of their building. For details of MAP and their fundraiser visit: mapcharity.org

To gain invites to BasementArtsProject and the occasional newsletter please send an e-mail containing your name to Bruce Davies at basementartsproject@gmail.com Our latest newsletter can be found here

Interlude | Tree (summer) by the kids of ESOL

Please feel free to join us for our Preview, the event is free.

BasementArtsProject can be found at 28, Back Burton Terrace, Beeston, Leeds, LS11 5JH