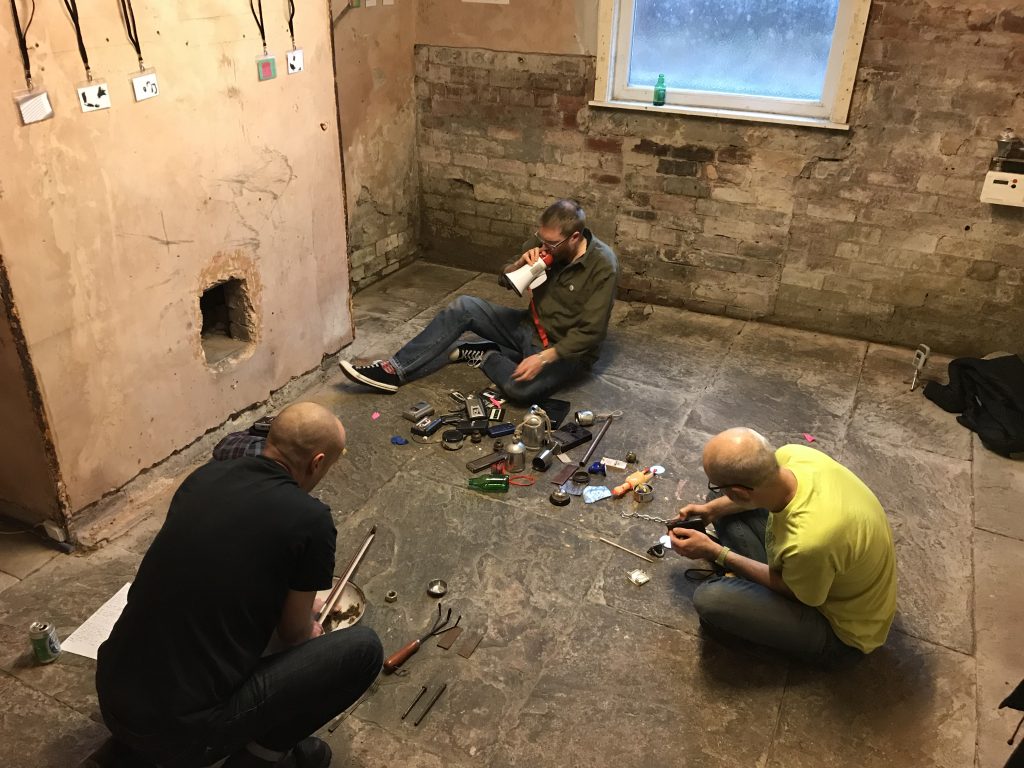 Having opened my previous article for South Leeds Life with a latin phrase this time I turn my attention to the French phrase avant-garde, or in English the Advance Guard. The origin of the term is a military one indicating a body of soldiers preceding and making preparations for the main body of an army. In art the meaning is effectively unchanged; the term was first coined in relation to art around 1825 and referred to the new and experimental thinkers and makers in the field of art, music and literature. Henri de Saint-Simon, himself a forerunner in the field of socialism, and the person who ‘allegedly’ coined the phrase, believed in the social power of the arts and saw artists, alongside scientists and industrialists, as the leaders of a new society.

Living in an era in which art is derided as a waste of time by many, and is even seen in the educational curriculum as surplus to requirement, we need to look beyond the constraints of conventional Wisdom and imagination, or lack thereof, and work out for the next generation the biggest of all questions. For what purpose are we being educated? How do people that are essentially creative by nature, fit into a system that does not give them the opportunity to actively participate? and, Can other industries and fields of endeavour truly flourish if they have neglected to educate people on the importance of creativity in their way of thinking?

These are questions that spring to my mind when considering the recent project by Toby Lloyd, formerly of Artist House 45 based in Garnet Road, Hunslet between 2015 and 2017. The project by Lloyd Wilson looked at what happens when artists are given the opportunity to operate in a fairly unfettered way within a community. Latterly Lloyd has been engaged in another project, ‘Between Eating and Sleeping’ which has posed the questions “What would you do if you had a year off?”, “What gets you out of bed in the morning?” And “What did you want to be when you grew up?” The recent project at BasementArtsProject ‘Between Gas Canisters and Personal Identity Lanyards’ featuring Hull based artist Yol (real name), and Newcastle based artists Posset (not his real name) and Lloyd (I’ll let you make up your mind on that one), has visualised some of the ways in which actual life collides with idealised versions of life. The exhibition revolves around the life of a Hull park bench, the inhabitants, the detritus and the difference between who we want to be, who we feel we should be and who we are forced to be by dint of our occupations.

The exhibition ‘Between Gas Canisters and Personal Identity Lanyards’ opened on Sunday 3rd March, a rare break with the Friday night tradition of recent years, with two performances by the trio of Yol | Posset | Lloyd. Yol’s vocals shred phrases related to the subject matter over a miasma of noise supplied by pitch-bent dictaphones, the clanging percussion of found objects and an assortment of other noisemakers. The performance brought out a range of different opinions as to what was going on and visitors talked of catharsis whilst others referred to the primal scream. Some found it disturbing whilst many also found an element of humour in it. Whilst these performances may seem bizarre and related to nothing upon first encounter, once you are encouraged to scratch below the surface its relevance is revealed, often once the conversations about ‘what just happened?’ begin. Back in 1913 the first performance of Stravinsky’s The Rite of Spring, accompanied by Sergei Diaghlev’s Ballet Russes, was greeted with absolute derision and hysteria, resulting in a riot, at Paris’ Théâtre des Champs-Élysées. One hundred and sixteen years later this is generally considered part of the canon of great classical music, back then it was too much for audiences to bear. The avant-garde is never accepted at the time, they are necessarily ahead of it. It is only with historical perspective that we begin to understand the actions of the advance guard, and the possibilities of bringing about the new society that Henri de Saint-Simon imagined.

Recently I paid a visit to the Wirral, the place in which I was born and brought up. The reason for this visit was to go and meet the current curators of the first art gallery that I visited as a small child. It was the mid-1970’s and I would have been around five years old, possibly younger. The place was the Williamson Art Gallery in Oxton village. The gallery is reasonably sized with nine individual exhibition spaces that were filled with regular art objects but also some very odd artefacts, much of which was of unknown provenance. In June I will be returning to this gallery to tell stories and talk about the memories that this building and it’s objects hold for me. Even now as my grasp on memory becomes somewhat hazy and distant in many areas I still have very clear recollections of the feelings instilled in me by this place. It is my fascination with this place, and more specifically one of it’s objects that has fuelled my interest in art into adulthood and driven my ambition. The ambition is not a financial one, but one that creates in me a desire to provide people with things, art related things, that they will remember forever more and maybe inspire a different view of the world. Over the coming months I shall be preparing my performance / lecture about this object but in the meantime you can find out more about the initial stages of this project at https://www.basementartsproject.com/studio-journal/echolocation

As mentioned briefly in my last article, 2019 will be the year of the Yorkshire Sculpture International and it is BasementArtsProject’s intention to put something here in Beeston, the gateway between venues. I currently have four artists lined up with significant connections to the area whose work I intend to bring to fruition during the 100 days of the festival. I am hoping that this will involve two permanent sculptures in public spaces, and a three month residency for one artist and one student at BasementArtsProject. The project will hopefully amplify the importance of art as a factor in education and employment whilst increasing the sense of well being within the communities that have access to it. The BasementArtsProject programme across the year is going to feature a number of artists all with strong links to the area whilst also being international in terms of their practice.

Whilst parts of this project are still theoretical at the moment, as I work on finding the funding to do this, I can confirm that we have been assured our first bit of financial backing with grants from the Henry Moore Foundation and the Leeds Art Fund. A lot further to go yet but we are persisting. On Thursday I shall be making a visit to a local Quarry with one of the artists involved, together we will be checking out some suitable stone. I shall report back next week with images and some more news . . .

Streetdance for youth with a Learning Disability