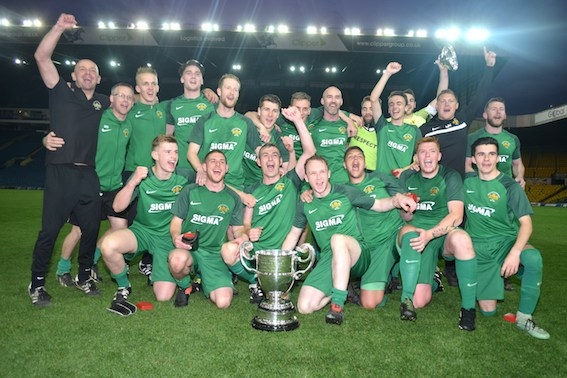 Beeston St. Anthony’s finished the season in style at Elland Road, playing the Final of the Senior Challenge Cup against Real Moor.

Beeston had an early 2-0 lead with goals from Steve Crawford and Matt Moon, but seemed to sit back when Real Moor struck with two goals to make the  scoreline 2-2.

Real Moor had an excellent chance of going 3-2 up when the evergreen Robert Dickinson rounded Steve Kerr in the Beeston goal, only to lose his footing and the chance was gone. Half time 2-2.

The second half had a more determined Beeston, passing the ball around, making Real work hard to defend and the deadlock was broken when Richard Vennard hammered a header into the “back of the net” to make it 3-2.

Then Real Moor went into free fall. The wizardry of wingers Stevie Crawford and Joe Wood, the strength of James Allan and Sean Jeavons up front, had Real scrambling and after a mistimed tackle in the area, the referee had no option but to award a penalty, which Crawford dispatched for a 4-2 lead.

Another dubious tackle from Real in the area, and another penalty, put to bed by Stevie Crawford for his hat trick at his beloved Elland Road. He was substituted shortly after to a rousing ovation from the crowd, and surely there was no coming back for Real Moor.

This proved to be as Jeavons had his legs clipped for yet another penalty, the third of the second half, and the game was finally sealed as Sean Jeavons hit the sixth for Beeston. Result 6-2. A tremendous result for BSA, Manager Mark Halmshaw and all the rest of the Staff at the Club.

This post was written by John Adamson using our Create an article for South Leeds Life page.