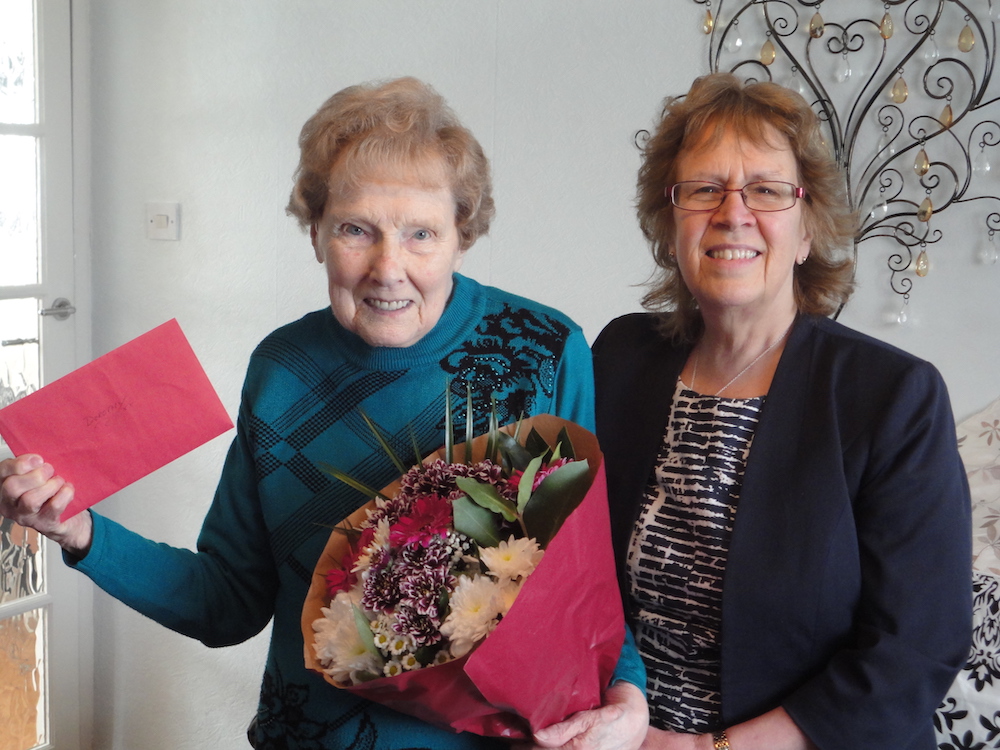 In Dorothy Hopper there was much more than met the eye. Many she once knew in Belle Isle have long gone, but there is no doubt that they, and others within the community were touched by this inspirational, strong woman who served to promote the wellbeing of the residents of Belle Isle.

Having nursed her husband for three years, his death in 1983 left a huge void in Dorothy’s life. She joined Belle Isle’s St John and St Barnabas church and got involved in the various activities there, always on hand to be chief cook and bottle washer at the events and services. She took pleasure from flower arranging, having the self-taught skill of knowing how to display flowers beautifully, and she was trusted completely to do this for various formal occasions.

She would spend hours preparing lessons for Sunday school class. Whether ten children or one child attended, it was important to Dorothy that they learned something of the Gospels. She went on to be churchwarden with responsibilities including the safety and upkeep of the building. Everything she did there she did with remarkable passion and dedication.

Equally, Dorothy could be found patiently sat with the children of Windmill Primary School that needed extra time to develop their reading skills. After all these years she had many of the progress sheets of these children kept in a little folder. She had written such lovely and positive comments about each child, as they worked through their difficulties of reading. Her positivity was Dorothy’s gift to all those that she came alongside. Joining the Belle Isle Voluntary Befriending Scheme, she visited those that were isolated, housebound, lonely, or bereaved and gave them what they most needed; time and space to express their feelings.

In the 1990s there was a ‘buzz’ in Belle Isle in regards to various much needed and exciting projects that could, primarily due to European funding, be set up in the area. Dorothy jumped at the chance go with a group of volunteers to Brussels to see how social housing worked there and what could be learned from them that might be utilised within housing projects in Belle Isle.

She was involved in the then new ’59’ Centre for the Elderly and at the official opening of the Winrose Project that was designed to support vulnerable young people that needed housing etc. She played a practical part in making this a reality. She was part of the team for Belle Isle Elderly Winter Aid, known now as Belle Isle Senior Action, later joining its Board of Trustees. She found it a little amusing to be appointed secretary for the Belle Isle Estate Management Board, as she’d had no secretarial training, but she still rose to the challenge.

An original member of the working party that set up the Family Centre in the undercroft of St John and St Barnabas Church, Dorothy maintained her commitment to the smooth running of the centre in many ways. Her dedication knew no bounds, and she attended classes at Northern College to learn about voluntary work processes, so that she could use some of her developing skills in a practical and meaningful way in her community.

In 1999 a personal invitation to the Lord Mayor of Leeds’ banquet made her smile, as she thought what her mother would have made of that happening to a South Leeds working class girl. She was very pleased to receive the invite though. As a self-effacing person, Dorothy blushed a little in 2000 when elected to receive the local Women of the Year Award. Presented by former councillor Geoff Driver’s wife Ros she was given a engraved glass rose bowl, that forever sat pride of place in her lounge.

Last year, aged 92, Dorothy decided to resign from the Board of Trustees. She would have known in her heart that giving that up would be the last piece of the jigsaw puzzle in her long years of community service. Councillor Judith Blake and the team came to her home to present her with flowers and a card in appreciation of her dedication to voluntary work. Whether attending an important meeting, pushing people around in wheelchairs so they could access holiday activities, or sorting out bags of old cans for charity funding Dorothy was always a team player.

As a mother, she always made time to listen to the family’s needs and wanted to know all their news, and what they had been doing. She had a positive attitude to life that was apparent to all those around her. A remarkable woman indeed, but you might detect a little bias here – that’s because Dorothy was my lovely mother and friend. RIP mum.