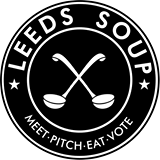 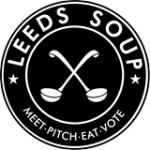 Leeds SOUP have announced that their third quarterly microfunding event will be held at The Tetley from 6pm on Thursday 3 March 2016.

The idea, based on a similar concept from Detroit, is that attendees each pay a minimum of £10 to attend the event and, while eating a meal of soup and bread, listen to 4 people each given 5 minutes to pitch on behalf of their chosen project, with the only requirement being that the project needs to benefit Leeds.

For each ticket bought the whole value is added to the funding pot. Each SOUP attendee will be given a voting token, to vote for the project they like the most. The winning idea will be awarded 100% of the evening’s takings to make their idea happen.

The first two Leeds SOUP events raised over £3,000, with the organisers holding the third event at The Tetley in order to accommodate more people than the original venue of The Adelphi could hold.

The event is sponsored by Taste Cuisine, who will be providing the soup and bread, and AQL who will be adding £600 to the winners funding pot.

The votes will be submitted and counted on the evening of the event, with the winner announced at approximately 9pm.

Anyone who has an idea they would like to be considered for the event is invited to submit it in writing to hello@leeds-soup.co.uk. The organisers will review the ideas submitted and confirm which have been chosen as one of the four pitches to be considered at the event.

Further information, including how to submit a ‘pitch’ and how to purchase tickets, is available at www.leeds-soup.co.uk