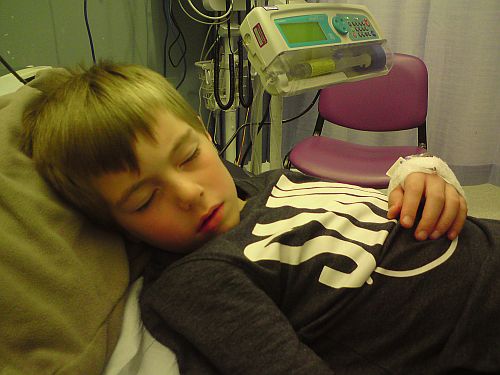 This is the story of Aidan, Julie and Chris Holmes’ son who recently was diagnosed with Type 1 Diabetes. As written by Aidan’s Mum Julie Holmes, top volunteer at BITMO GATE.

Julies husband Chris is also a Volunteer at BITMO GATE and like Julie volunteers elsewhere.

On Saturday 27 September 2015 Aidan was admitted to the Jubilee Wing at LGI with Type 1 Diabetes.

This was a shock as he had shown no signs of anything, he was still his normal cheeky self, running round, eating and doing everything a typical 6 year old boy would do.

He had been drinking a bit more than usual for a few days but because he was doing all his normal things and showing no signs of anything I just assumed it was a phase he was going through.

That Saturday he had been down to his Grandma and Granddad’s with his sister for the day.  When he came back home, he seemed OK. Grandma (my Mam) had said he had been quiet and not his normal self, she also said he hadn’t eaten much. Half an hour or so after Grandma and Granddad had gone home Aidan asked for something to eat, he tucked into a bowl of Super Noodles and was eating with no problems. He was then running round the house as normal.

Around 8pm that night Aidan was talking to me but he sounded drunk, he was slurring his words. I phoned the emergency Doctors and got an appointment. They said over the phone it sounded like a water infection, which did make sense. They had nowhere local to go and I had to get to Meanwood Road, my Dad took me and Aidan up there.

I had taken a water sample of Aidan’s with us and the Doctor checked and said “it’s bad news, it’s Diabetes” I was completely shocked. He wrote a letter and we had to go to hospital.

Saturday night at 11pm I was walking into Jubilee Wing with Aidan, completely in shock at what we had been told.

We made our way up to Ward 9 and Aidan had his assessments done, we were then shown into a room. Aidan laid on the bed, by this time he had become very dehydrated, his mouth was dry, his lips were dry and cracked. I could also see his face looking different. An hour earlier there was no sign of this. Within a couple of hours, he had gone from a cheeky little boy, to a very poorly little boy. His blood sugars were nearly 40, he had high Ketones, he also had Ketoacidosis.

Aidan laid on the hospital bed while nurses and a doctor inserted cannulas into each hand, he never flinched just laid there staring at me, while I talked to him and stroked his head. He was then hooked up to 5 drips, all running into one of his cannulas.

About 5am Sunday morning, Aidan was moved in to his own room. There was also a bed for me, not that I slept much, it was just somewhere to lay down.

Every couple of hours or so, there were doctors and nurses coming into the room and taking his blood for testing. This was on top of the normal finger prick test for his blood glucose. Again he just laid there and let them, not a peek out of him, not a flinch or a cry of pain.

The acidity in Aidan’s blood had caused stress on his little body, but after 3 days his blood returned to normal and thankfully no damage was done.

On Tuesday evening Aidan could eat for the first time, since his Super Noodles on Saturday night. He had sausage, beans and mash and he enjoyed it!

From Tuesday came all the visits from the Diabetic Team, such a lot to take in.  Even Aidan was listening to what they were saying, and we knew this because if they asked a question about something they had just talked about, Aidan knew the answer.

Tuesday was also the first time that I had to give Aidan his insulin, I never let the nurses do it, I took it on straight away.

To suddenly start having to put needles in my little boy, it was heart-breaking, but now it has become the normal thing. Aidan is so brave too, he has never complained about the injections, or the finger pricks – which he does them himself.  He knows how to set it all up, how to change the lancets and he knows what numbers are good and what numbers are too low.

Late afternoon on Thursday was time to say goodbye to Jubilee Wing and I took Aidan home.  He was glad to be home and was soon running round and been his normal cheeky self.

The next step was school, Aidan was back at school the following Tuesday after we had a meeting with Jane (Aidan’s Diabetic Nurse) and his teachers.  A Care Plan was put in place and then it was my turn to be teacher. I had to go to school at dinner time and show Aidan’s teachers how to do his insulin, I did this for a week and then it was my turn to watch the teachers for a week. When myself and Aidan felt comfortable with the teachers doing the insulin and they also felt comfortable doing it, I signed them over to be allowed to do Aidan’s insulin injection on a dinner time.

Aidan has took to the Diabetes very quickly. He knows we have to check the labels and do the counting before meals; Aidan likes to be involved with this as well. He also knows that not everything he eats needs to be covered with insulin. He is getting quite good at knowing what needs insulin and what doesn’t.

We are so very proud of Aidan for everything he has been through and continues to go through. We are also proud of our other children, we know they found it hard to see Aidan in hospital, but it was good for him to have everyone there.

I would like to say thank you so very much to all the nurses and doctors on Ward 9 in the Children’s Assessment and Treatment Unit (CAT) and also thank you to Poppy from the Playroom.

* I would also like to add that Aidan’s clinic appointments are going well.  His HB1AC blood count has dropped right down and they are expecting on his next clinic date (which will be his third) that he will be with the green zone.

This is a good website for Junior Diabetes.   https://jdrf.org.uk/