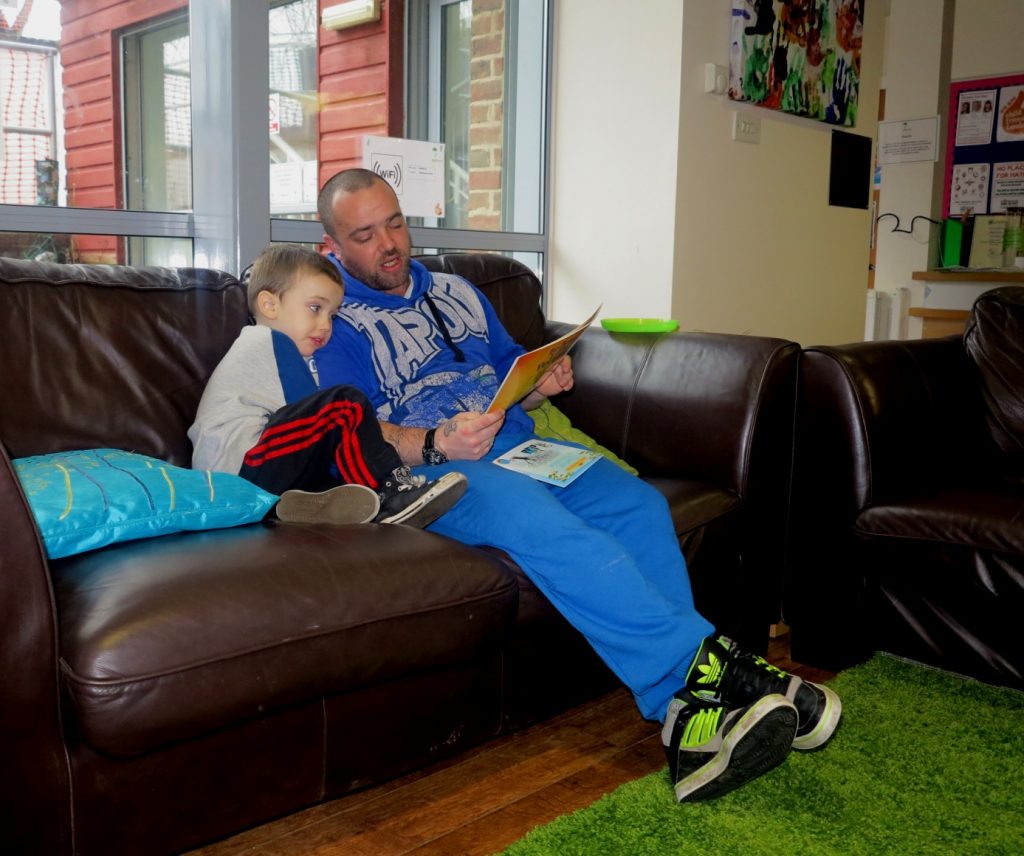 Back in December 2015 South Leeds Life reported from the Inner South Community Committee meeting, which took place at the Civic Hall, on the community engagement aspect of the evening. Alongside Councillors and other members of the public, there was a group of dads who presented their own experiences and opinions of family support services available to them.  Tom Senior who runs the Young Dads Project at Health for All in South Leeds was with them that evening. I contacted Tom earlier this year and arranged an interview with some dads at the Middleton Park Dad’s Group to learn a bit more on how accessible these groups are for dads.

So, on a rainy Saturday morning (6 February 2016) I took myself down to Belle Isle Family Centre. The dads group runs from 11.00am – 12.30am and is funded by a Comic Relief UK grant award. I meet Menspace Worker Andrew Flynn who is taking over the running of the group from Chris Filby who has run the group for the last two years. Initially, the centre is quite empty, but sounds soon start to materialise from the kitchen and fresh fruit and drinks are delivered though the hatch in the wall. There are workers and volunteers busily organising the room, and preparing areas of activities; drawing, painting, puzzles and games. 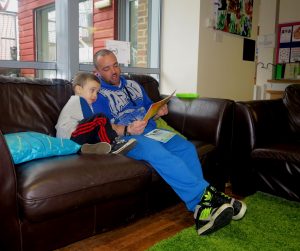 Soon, dads start to arrive with their children, ranging from 5 months to 8 years. There’s a sofa area and I recognise Liam, a dad who spoke at the meeting. Liam is reading to his son Ryan who is cuddled up close to his dad listening to the story. I introduce myself and tell him that I’m here to find out a bit more about the group for an article – and that I recognise him from civic hall.  He remembers standing up in front of everyone talking and says, ‘It was nerve wracking getting up – I had a plan in my head what I was going to say, but as I started I seemed to get overwhelmed by it all’. I reassured him he’d done a good job and that it was important to get his voice heard.

Liam started talking about how the group has really helped him build better relationships with his children (Liam has five children) and how it gives his wife a break. ‘I usually bring all five, we can come here and relax – however, you don’t relax long when you’ve got five kids’.

Liam seems like a real advocate for the group, and I ask him what he would say to a dad thinking about joining the group. ‘Just come along and give it a try! There are staff here to help support playing and help guide you in communicating with your child. I’ve come to understand that spending quality time with your kids is fundamental’.

Liam recalls when he first started the group two years ago; he was not the man he is today. It was through social services that Liam began attending the group, but it’s voluntary and he decided to stay. I’m more aware of my behaviour and I watch what I say when I’m around the kids. I know when to chill now, when to take a step back, whereas before I used to let loose. Liam also thinks there’s too much responsibility on Mums too.  He understands that building those quality relationships with your kids helps share the load of the hard work that is parenthood. Liam, who is a care leaver, recognises his relationship with his own dad would have been a lot better if he had had this support.

As well as the dads group there are other groups organised by Health for All and run by Tom.  Every Tuesday is the ‘Young Dads Tuesday Social’ (6.30pm-8.30pm) at the Belle Isle Family Centre. Liam also tells me they are just working on forming a new Dads group called ‘Time for Dads’ too. But the most exciting group which gets mentioned a lot is the allotment group that both dads and children can take part in together on Friday’s. Johnnie and Liam are proud to say their children have helped with the running and upkeep of the allotment and have grown their own plants, fruit and vegetables. Through assistance and guidance from the Young Dads Project Liam has found full-time work with the parks and countryside department with the local council. He is also now thinking about going to back to study at college too. 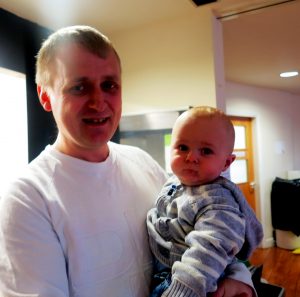 I then meet Johnnie. He too has five children and is a full-time Dad. He holds his youngest son Kyelson on his hip. Kyleson doesn’t move the whole time, apart from turning his head from time to time to beam into his dad’s eyes. Johnnie says ‘The group is a very positive place. It’s about putting negative issues aside and having fun with the kids. If there are any issues then as a group we all help each other out. That way we make it a more positive place. We all get on, and yes some people have got issues and there is a support system to deal with that. However, we’re here to help everyone, help ease the load and have a laugh. Dads usually are the ones who spend most time at work so spending time with our kids is the most important thing to us”.  Johnnie is also the volunteer driver and collects dads and their children every weekend in a Health for All minibus.

I get a lift back with Johnnie and share the minibus with the dads and children. There is light-hearted banter in the bus amongst the dads about a recent Sunderland football match. We pass the new incinerator in Cross Green and I quickly interrupt to say, ‘Look (pointing at the massive side of the arch), that’s going to be the largest ‘green wall outside Dubai in the world!!’, which is greeted with – yeah we already know, but how are they going to get up there to trim the plants back? And what about more jobs?’ The communal empathy extends outside the walls of the group.

I ask Johnnie, how he sees the group changing by a new facilitator? He says, ‘We need to be thinking of ways to help him, and get new ideas to make it easier –it’s all of our responsibility to help him. But you know the most important thing is who is going to get the most benefit from this – is the kids”.

I left feeling one thing (apart from being a bit car sick); Johnnie was right – it is just a group and there shouldn’t be anything unusual about a dads group, but I feel like the support is there more for dads learning to how to enjoy their time and communicate with their children. When Liam stood up in front of council leaders he was speaking for all of the dads not just himself, but the resonance extended further, that he was proud to be part of something and realised the role he as a dad takes and exactly what that means to him and his family.  So, if you want to give it a try or find out more information on Dads groups check out the contact information below.