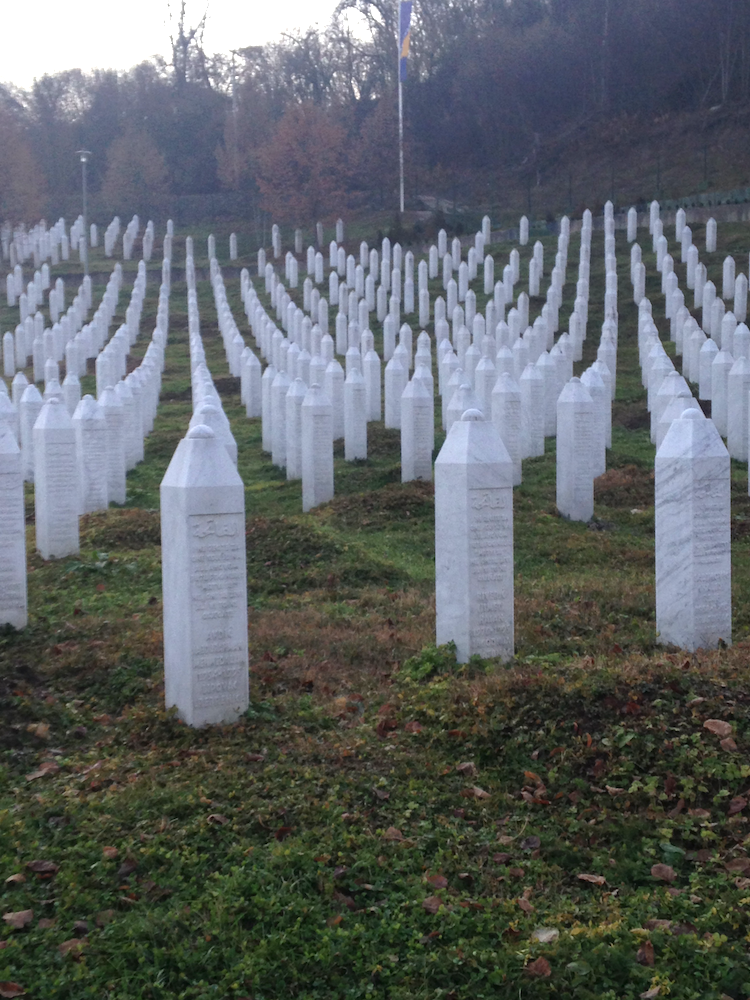 Yorkshireman Gohar Almas Khan has spoken of his heart-breaking visit to one of Europe’s worst atrocity since the Second World War.

Mr Khan and other delegates from the UK were given an opportunity courtesy the charity Remembering Srebrenica to visit Bosnia-Herzegovina to learn about the mass murder in Srebrenica.

In 1995 General Ratko Mladic and his Bosnian Serb forces systematically murdered 8,372 Bosnian Muslim men and boys, even though the area had previously been declared a United Nations Safe Area. Dutch peacekeepers in Srebrenica failed to prevent the massacre.

Mr Khan said the three-day visit was deeply moving and as cliched as it may sound it was a life changing experience.

He told me how it was an emotional experience which had him in tears.

Mr Khan said before his visit, he was briefly aware of the genocide, but the severity of it hit home when he was told about how people were being sold packages to come and dress as soldiers, be given guns and then let lose to shoot young men, as though they were playing a video game. His heart sank hearing that story and cannot even imagine how this impacted on the young Muslim men of Bosnia.

Even today, new mass graves are still being discovered. Initially, only part of an arm may be found, and several years later another. Mr Khan vividly remembers one of the mothers of Srebrenica, who lost all the men in her family to the massacre, she doesn’t know where all their graves are, but stands outside the memorial of around 800 graves selling souvenirs.

“As I put her head on my shoulder, I felt as though she was my mother and her pain, pierced through my heart as though it was mine. Being able to bury a loved one gives us closure and helps us grieve. The nature of the massacre ripped even that away from these families and to stand offering my soldier to a mother who has experienced this pain first hand right outside the memorial was a feeling that even know leaves a lump in my throat.”

As a sign of solidarity to their families, here in the UK we remember the victims every 11 July, just as we commemorate the victims of the Second World War. The European Parliament adopted a resolution to do just this back in 2009 – but the UK is the only country to officially accept it so far and for this Mr Khan feels extremely proud to be British.

He is grateful to the Remembering Srebrenica initiative, whose aims are to help participants learn how they can improve community cohesion in their own towns and cities and learn from the lessons of the Srebrenica massacre.

“I am very proud of the role Britain has played in supporting the victims of the Srebrenica massacre. It makes me very proud to be British.”

Mr Khan says he felt the betrayal from our peacekeepers whilst in Bosnia.

Research and evidence suggests that Srebrenica was a preventable tragedy: the UN peacekeeping force was already on the ground. Yet it stood by as men and boys were driven to their deaths. It is believed that intelligence was available which signalled Serbian general Ratko Mladic’s intent to capture and “cleanse” Srebrenica. So, it seems claims that the UN forces did not comprehend genocide could take place are unfounded. Thousands were murdered as a result of their inaction.

Mr Khan and the rest of the delegation had the opportunity of meeting educational specialists, the British Ambassador to Bosnia-Herzegovina, members of the Mothers of Srebrenica group and other genocide survivors during their visit.

One survivor made a lasting impression on Mr Khan. Mr Khan met Resad Drbonja, in Sarajevo who is a survivor of the massacre and one of the main guides during the 3 day trip. Resad described how life was before the massacre, how he used to enjoy going out and socialising with his Serb Christian friends. Everyone was equal, there were no differences in race or religion, Resad told Mr Khan.

Resad explains that he and his friends used to live in flats, and he describes how when the bombing started he had invited his best friends (who were Serbian Christians) to come and stay in his flat, as their flats were high up and more likely to be targeted.

“Upon staying one night, his friends had all left him the very next day, with no goodbye or no warning that the whole block of flats was going to be under siege. His friends had been given pre-warnings to leave as Christians and they did so, without even taking a second thought over a friend whom they had known and socialised with for years. Faith now seemed to matter.”

“This shook me” said Mr Khan. “How can your own friends just leave you at death’s door like that?”

“I had to ask Resad that if it was the other way round what would he do?” continued Mr Khan.

Resad confidently said he would ensure his friends were safe.

“This gave me a moment of pride seeing this young man’s values, which were instilled in him from his faith and that’s the irony of it all”

“This holocaust and massacre of Muslims happened in the heart of Europe just 22 years ago and it needs to be told. We need to show that Muslims are NOT terrorists but victims. Just look around, Palestine, Iraq and Rohingya as examples. Muslims are being killed and we must do more to respect people’s faith and way of life” he said.

“We need to learn to live together and celebrate our common values. So, let’s educate people about each other and take good from each other” he concluded.

This post was written by Fatima Patel and first appeared in Asian Sunday.