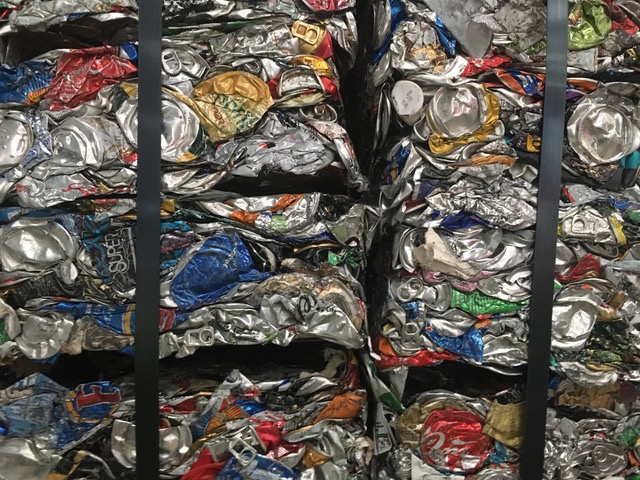 Have you ever wondered where everything you put in your green bin goes? Well if you live in south Leeds, the answer, at least to start with, is not very far.

Premier Waste Recycling Ltd are based just off Dewsbury Road, and that’s where the contents of around 300,000 Leeds green bins are sorted. Close to 800 tonnes of recyclable waste from Leeds households arrive there, each and every week, alongside recyclable waste from a couple of other local authorities.

During our visit, organised by Leeds Civic Trust, we were shown each stage of the process, from waste being unloaded from bin wagons, through to sorted materials being baled and taken away for further processing by other companies.

Here’s what happens. After a wagon-load of material is unloaded, a member of staff does a visual inspection, to check for levels of “contamination.”  This could be anything and everything, depending on what people have put in their green bins – with common contaminants including dirty nappies & food waste.

There are two issues here – one is around it being labour-intensive to sort stuff that shouldn’t be there – and also that food waste & other materials  contaminate other recyclable items, such as plastics, with the result that waste processors may refuse to take them – or at the very least pay a much lower price.

If the level of contamination is too high, the whole load will be rejected – and will be diverted instead to the Recycling and Energy Recovery Facility (the RERF – aka the incinerator) in Cross Green. They estimate that around 20% of potentially recyclable material is rejected because of contamination – a significant amount – which clearly has an impact on the city’s recycling rates.

The materials then begin to wind their way around the site on a series of conveyor belts. As the waste passes along the conveyor belts, different materials are pulled out, mostly by mechanical means. At one stage much of the material passes through a Trommel – an enormous drum with holes of assorted sizes, which automatically sorts different materials. Materials also pass over a magnet – pulling out the ferrous metals.

But the sorting isn’t all done by machines. We entered a room with around a dozen people stood at two conveyor belts – hand-sorting materials passing by at speed. One conveyor belt had mostly metals, the other mostly plastics – and the job of the staff was to pull out materials that hadn’t been sorted correctly by other mechanical processes. There was some stuff that had just made it onto the wrong conveyor belt – and other things that should never have been in a green bin in the first place.

Eventually (although we didn’t see this part of the process), the sorted materials are baled – ready for sale to a range of different processors. The market for recyclable materials is notoriously volatile – no more so than now, with all the talk of China no longer wanting our plastics. But we saw various materials ready for the next stage of their journey in the recycling process – be that to India (cardboard), Turkey (various materials), or north Wales (paper).

It was quite an experience. It’s a noisy, smelly environment (imagine the smell of thousands of not very well washed milk bottles) – and it’s hard not to be overwhelmed when you’re faced with the amount of stuff your city throws away (and remember this is just the recyclable waste).

I was also struck by the amount of things that shouldn’t have been in green bins in the first place – staff were having to pick all sorts of things out by hand.

It was clear to me that when it comes to recycling, we can all play our bit. First of all by putting the right things in the right bin – and secondly by giving things a wash before you put them in the green bin.

So whilst I’m glad that we’re clearly working hard to recycle what we can as a city, it reinforced for me that we need to be doing so much more further up the chain too. Businesses need to reduce the amount of packaging they use for the things they sell to us – and we all need to go out of our way to buy things with less packaging. It’s not always easy – but I think, thanks in large part to David Attenborough – public opinion is shifting and companies are starting to respond.

Rob Greenland is one of the co-founders of Zero Waste Leeds – you can find them on Facebook at www.facebook.com/zerowasteleeds and on Twitter at @zerowasteleeds