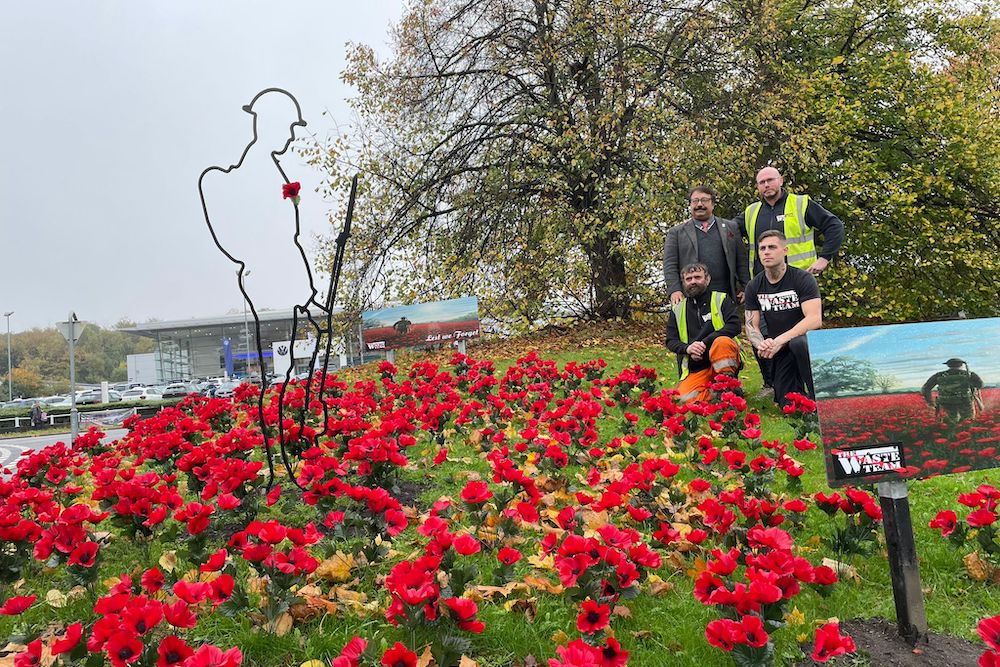 As Armistice Day draws closer Leeds City Council Armed Forces Champions have welcomed a new display that has been created on the verge of Elland Road/Gelderd Road in the city.

Armed Forces Champions, Councillors Gohar Almass (Labour, Beeston & Holbeck), Caroline Gruen (Labour, Bramley & Stanningley) and Jane Dowson (Labour, Chapel Allerton), have thanked The Waste Team, a local waste removal firm, for not only coming up with the idea of a temporary display that will be relocated to a different location across the city each year, but also for sponsoring it.

The Waste Team worked alongside officers from the Council’s Parks and Countryside department to create the temporary display which consists of a Tommy soldier statue, a sign, artificial poppies and grass.

“We would like to express our gratitude to those involved in creating this wonderful display. It is so important that we continue to take the time to pay our respects each Armistice Day to remember and be thankful for the sacrifices made by so many to ensure our continued freedom.  We would like to thank The Waste Team for once again sponsoring this fitting and poignant tribute that will be seen by so many people over the next few weeks.”

“This is the second year for The Waste Team to support such a worthy cause. We are all so fortunate, to be free, safe, and living our lives the way we do. This privilege was given to us by the fallen heros that gave the ultimate sacrifice to protect our future and freedom.

“We would like to thank Councillor Gohar Almass, Leeds City Council and Leeds Parks & Countryside Service for their help and support in the display of remembrance. The display is in a prime location on Elland Road, close to the home of Leeds United AFC. Residents, Visitors and commuters will pass by and have the chance to reflect and be thankful to those that gave their today for our tomorrow”