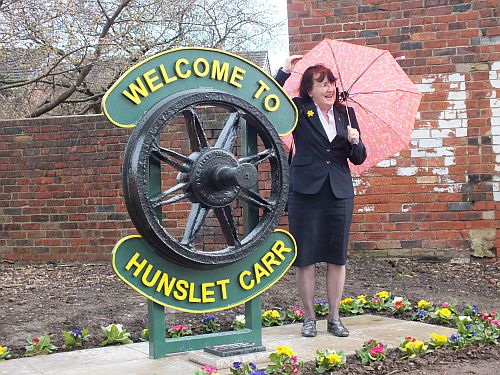 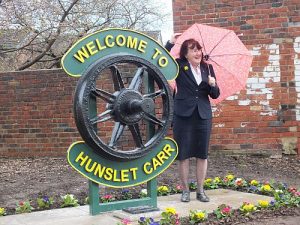 These Hunslet Carr people are a hardy lot. About 30 or so people braved the wind and rain to hear Cllr Elizabeth Nash unveil the Hunslet Carr Wheel last Thursday (7 April 2016).

The sign, which carries the text ‘Welcome to Hunslet Carr’, has been erected outside the Bay Horse pub by Hunslet Carr Residents Association. The wheel for the sign was donated by The Middleton Railway Trust Ltd. I believe the wheel is over 100 years old.

The wheel spent its life on a wagon built by Roberts of Wakefield and made its way to Middleton Railway, where later it was renovated to what you see today. 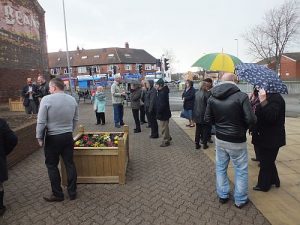 The Middleton Railway is the world’s oldest working railway. It is run entirely by volunteers. See more about the railway at www.middletonrailway.org.uk

Anyway back to the unveiling. Cllr Nash said a few words about the donation of the wheel; unfortunately her voice on occasion was drowned out by the traffic noise on Balm Road.

Then we made our way for HCRA’s monthly meeting at Woodhouse Hill Community Centre, just around the corner from the wheel. All the residents were greeted with tea/coffee and cake. 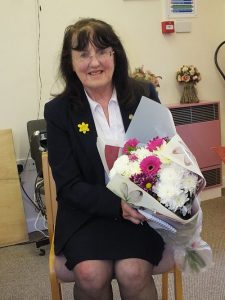 The meeting discussed various issues going on in the area. A PCSO was present, who went on to say luckily not much crime to report in the Hunslet Carr area. If you live in the area and want to know what’s going on, do go along to the meetings, which take place on the first Thursday in the month.

At the end of the meeting, Kenny Sauders thanked everyone for turning up in what were very wet conditions and presented Cllr Nash with a bunch of flowers for all her help in the area.

Back out into the rain, we all made our way home.

“We set out to give the area something people could identify with as belonging to Hunslet. I think this new sign has been done really well using our railway heritage and Hunslet colours. I would like to thank Malcolm Johnson at Middletion Railway Trust for donating the wheel and Jonathan Davis who has done a brilliant job designing and making the Welcome to Hunslet Carr sign.”