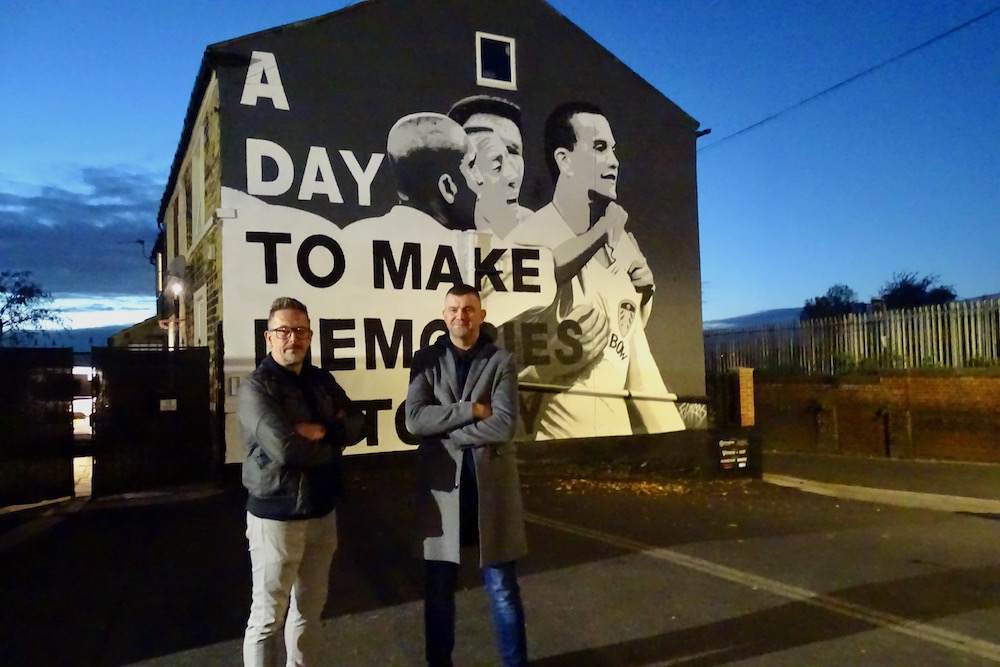 Leeds United Supporters’ Trust have commissioned their 13th Leeds United themed mural that’s emblazed on the side of Laburnum Cottage, based in the Whistlestop Pub Car Park in Beeston created and painted by Leeds based artist Phil Harris.

The mural, now in situ, celebrates that famous moment in Milan that’s still chanted amongst the terraces by Leeds United fans today, the ‘Dom Matteo San Siro Goal’. It’s painted on the side of Laburnum cottage facing the Whistlestop pub in Beeston and is owned by The Real Housing Foundation Ltd which provides supported living for people with learning disabilities.

Dom has worked hand in hand with artist Phil Harris to create the impactful design and he wanted to make sure the mural screamed out that life is all about sharing memories and to live for the moment. The mural carries the huge strapline – “A Day To Make Memories Is Today”

The mural is sentimental to many who are involved in bringing it to life, Dom was diagnosed with a brain tumour in November 2019 and had 10 hours’ brain surgery. He was in hospital for three weeks and biopsy and test results revealed he had a large, very rare grade 3 (cancerous) brain tumour. Following the operation Dom underwent six weeks of radiotherapy at St James’ University Hospital and eventually rang the bell to mark the end of treatment in February 2020.

“I’m really proud that Leeds United Supporters’ Trust have dedicated a mural to this special moment. It’s always a talking point when I’m around Elland Road chatting to fans and I know the game holds a special place in their hearts – I’m so glad I’m part of that. However, when I had my brain tumour diagnosis our families’ lives were turned upside down overnight. One day, I was on TV, the next I was fighting for my life. I feel blessed to still be here and now I don’t take anything for granted, a close brush with death makes you realise how precious life is and wanted that to come across in the mural and encourage everyone to live for the moment.”

When artist Phil Harris was asked to design and paint the mural, he jumped at the chance to be involved as he lost his brother to a brain tumour. Phil said:

“I lost my brother Mark Harris back in 2015. I could not turn down the opportunity to create this artwork and add it to the growing list already commissioned by the Trust. It is a very poignant piece for me for the common life changing challenges faced by my brother and Dom. Families are forced to face many challenges under such circumstances and are sometimes lucky enough to get the chance at a future. It is with this in mind the artwork, with Dom’s influence, encourages thought to live for the moment and make today a day for making memories. My wish is the mural can impact onlookers to make decisions that will bring greater wellbeing.”

Julian Brown and the team at Pinheiros Corporation Limited have funded this Mural in honour of their close friend and Leeds fan, Mark Harrison, who sadly passed away earlier this year. Julian said,

“We were looking for a fitting tribute to Mark and we think this is perfect, as one of our many great memories of him is of enjoying the Champions League game in Milan together, especially when Dom scored this infamous goal. We have been impressed with the work that Leeds United Supporters’ Trust has put into the Murals around Leeds, so we jumped at the opportunity to support them. The Murals are a fantastic focal point for fans and the wider community in Leeds.”

The mural is the 13th to be commissioned by LUST following on from the 1992 midfield mural on Lowfields Road and was the first LUFC mural to kick start the mural trend back in 2017. Since then, the Trust have added another 12 stunning tributes around the city.

An interactive website has been created with all the locations of the murals and its own route map www.murals.lufctrust.com. Many fans have already taken the tour and local groups have even done charity walks and cycle tours to raise funds.

“Being in the San Siro that night myself, I know first-hand the legacy that game left with many supporters – so it’s great to see it etched in mural form. It’s been an honour to have Dom directly involved in the development of the mural – seeing his passion for the club shine through, but also the challenges he’s had to face over the last few years following his diagnosis – he’s a true legend and a fighter – I’m sure I speak on behalf of all Leeds fans when we say that we’re really proud of him.”

The residents of Laburnum cottage said:

“All of us at Laburnum cottage are extremely excited and proud to have the mural on our home.  We are huge Leeds fans and we’ve spent many years supporting Leeds United and now it’s like we are part of the team! It is an honour and privilege to have the mural as a staple amongst our community and spread joy for many years to come.”

Photo: artist Phil Harris and Dom Matteo with the mural