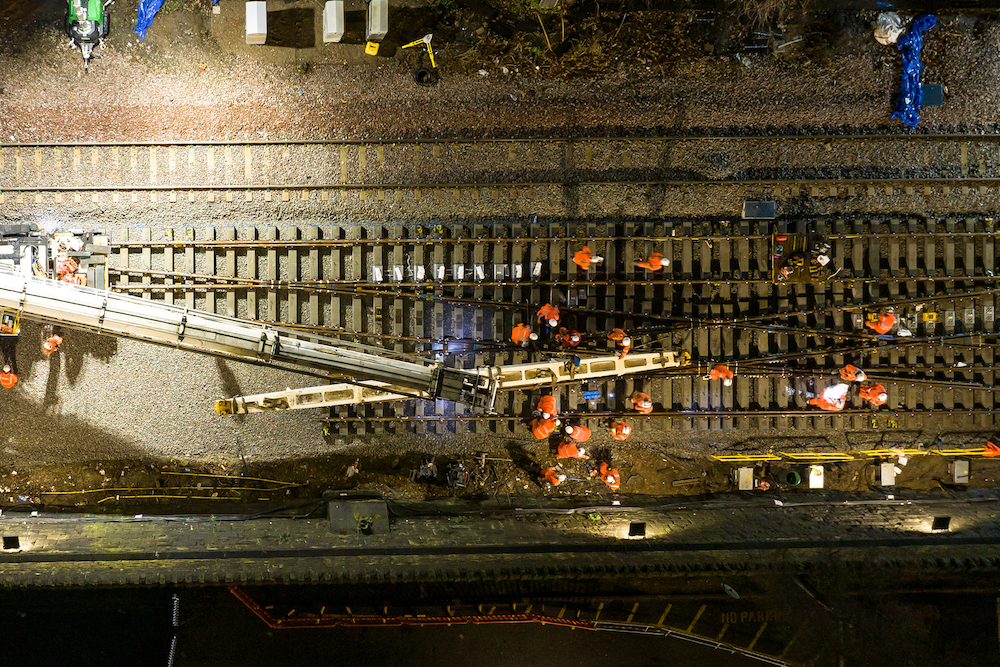 The Transpennine Route Upgrade is on track to better, more reliable journeys after Network Rail delivered improvements over Christmas and New Year between Manchester, Huddersfield, Leeds and York.

While the route was closed on Christmas Day and Boxing Day, major work to ready the 70-mile route for full electrification powered ahead in Manchester (near Manchester Victoria and Collyhurst) and near Neville Hill depot in Leeds. Work included the installation of a new track crossing into Holbeck depot to support more trains using it in future.

This will eventually help to save up to 87,000 tonnes of carbon emissions each year – the equivalent to 5.9 million car journeys along the same route.

Further upgrades to track through Leeds, Batley, Morley and Wakefield Kirkgate were also packed in over the two days to make the best use of the annual Christmas closure and deliver as many improvements as possible for passengers.

The improvements in Wakefield Kirkgate will boost resilience so the line can be used as a key diversionary route when work takes place on the core Transpennine route in future. This follows the completion of signalling upgrades and the installation of a new footbridge with lifts at Castleford station in November.

Investigative work also progressed through railway tunnels and bridges between Huddersfield and Dewsbury, where the line is set to benefit from twice as many tracks in the future to make way for faster, more frequent trains.

Between 31 December 2022 and 2 January 2023, engineers continued to renew the track and prepare for the new, fully accessible station at Morley.

This package of improvements is part of the Transpennine Route Upgrade’s plan to transform journeys across the North, better connecting towns and cities through more frequent, faster trains, running on a cleaner, greener and more reliable railway.

“The multi-million-pound Transpennine Route Upgrade will completely revolutionise rail travel between regional hubs such as Manchester, Huddersfield, Leeds and York and it is great to see all this work delivered successfully over the festive period.

“We are constantly investing in schemes which will bring a better and more reliable railway, and this package of upgrades complements hundreds of other projects delivered across the country, such as the £5.1m platform upgrade at Manchester Piccadilly and the £6m track upgrade at York.

“I’d like to thank both our passengers and communities across the route for their patience as we take one step closer to a faster, cleaner, greener and more reliable railway for passengers across the north.”