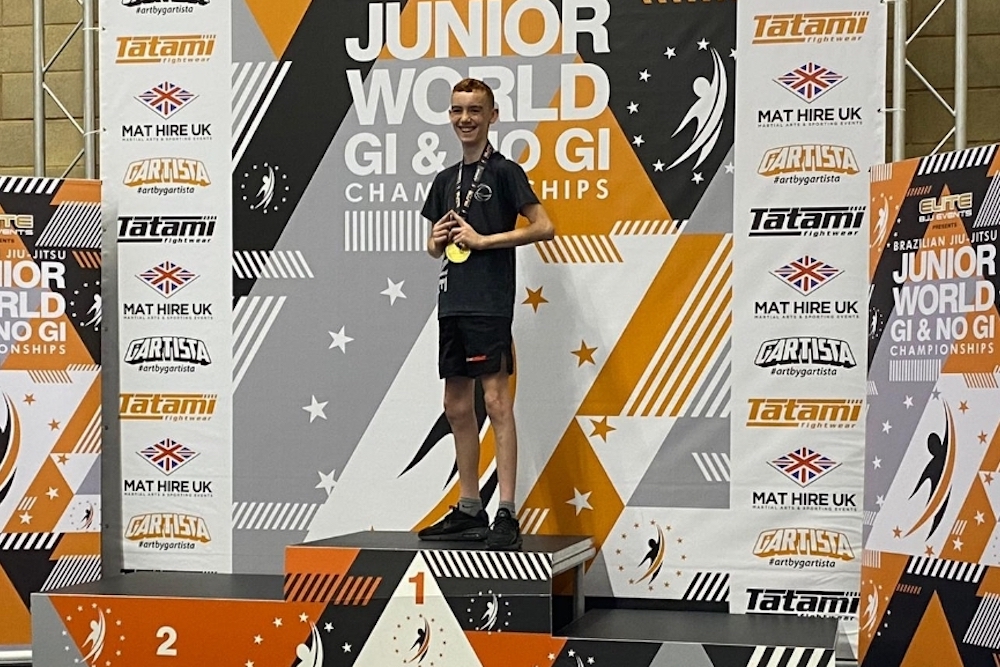 Middleton has another World Champion in 12 year old Theo Kenward who won Gold at the Brazilian Ju Jitsu (BJJ) Junior World Championships in Wolverhampton over the weekend of 9-10 July 2022.

Theo, who is just finishing Year 7 at Cockburn Laurence Calvert Academy, was competing in the Under 53kg male teens Gi and No Gi Category.

Theo is one of about nine young people from the Middleton area that train with Tom Crosby at the AVT Combat Base Gym in Morley.

Reflecting on his win, Theo said:

“At first I was shocked that it wasn’t going to be that easy to become World Champion and I was a bit surprised when I won, but then I realised this is only the start and I’ve got a lot more challenges up ahead. Jiu Jitsu is an extremely hard and complicated sport that has a lot of levels to it, but I’m only just getting started.

“I’m not going to let this go to my head and me and my team at AVT are working very hard nearly every day to become better. This is almost becoming our life now. We have an amazing set of coaches at our gym, but my main coach Tom Crosby has helped me learn and understand the sport the most.”

“Me and Theo’s mum are so proud of Theo.

“He trains 6-8 sessions per week, and he never needs any encouragement to go training, as he is so committed to it. Going to the gym keeps Theo active which is healthy for his mind and body. Theo used to train in Thai boxing until the start of lockdown when the gyms were shut and that’s when he got into BJJ because Tom Crosby is his childmider too. So in such little time with a lot of hard work and dedication he has become Junior World Champion and we are also proud.

“I would like to add that we are very grateful for all the coaches at AVT especially Tom for everything he does for Theo in the gym and in his childcare along side his mum Lisa and her partner Paul. Without them Theo would not be a champion in and out of the gym.”