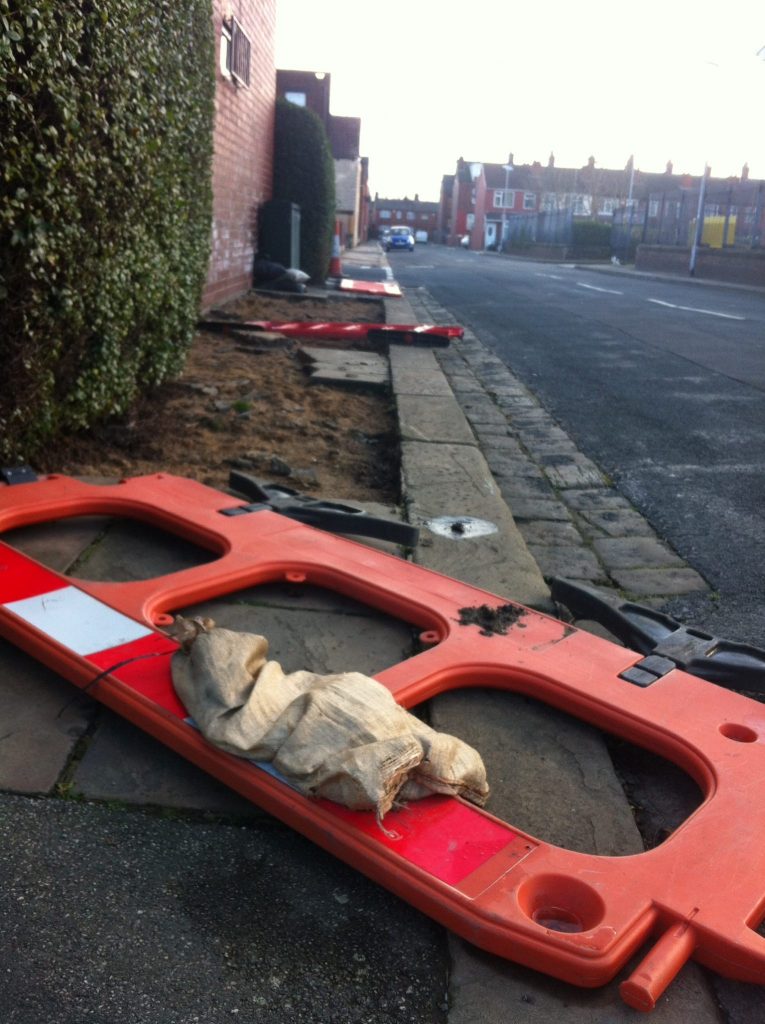 Beeston residents have been shocked to discover large quantities of paving slabs stolen – in many cases, in broad daylight – from the pathways of the Hunslet Moor area, just off Dewsbury Road in Beeston. This is the second spate of paving theft in the area since the New Year, the first offences being carried out on nearby Tunstall Road and Rawson Terrace, and Recreation Terrace in Holbeck, in mid January (reported here in South Leeds Life).

The first street to be hit was Poulton Place off Longroyd Street North on 4th February. This, like the previous theft on Recreation Terrace, took place (at least in part) in broad daylight. A local resident who observed the paths being dug up stated that the thieves were wearing high-visibility vests to give the impression they were acting legitimately.

The second section of pathway to be removed was on Longroyd Grove on 10th February. A resident reports that he discovered the theft upon opening his door early that morning, and finding that there was no longer a walkway in front of his house! Longroyd View was also targeted at around the same time.

Thieves are targeting the area for Yorkshire stone, considered a valuable commodity in the building trade. ‘Well-weathered’ Yorkshire flagstones like those stolen from the Beeston terraces can sell for around £70 per square metre. And quite apart from the unsightliness, the tripping hazard on these exposed pathways is of particular danger for our elderly residents and those with mobility issues.

“Leeds City Council has a budget. For those prepared to turn a blind eye to crime like this, consider the amount of money that the Council will need to spend to replace these paths. How will that affect the services we all receive in South Leeds? Perhaps there will be less in the pot for new playgrounds and recreation facilities, and other investments that could really benefit our community.”

She continued: “Some missing paving might not be the worst thing that ever happened to South Leeds, but pride in our area costs nothing and can reap huge social rewards and personal well-being. We deserve a safe, attractive place to live.”

Anyone with information relating to the thefts should report it to West Yorkshire Police, who are currently investigating. As the thieves have – on at least two of these occasions – attempted to intimidate residents who have questioned them, the police have advised that anyone witnessing paving theft should not approach them but contact 999 immediately. (Or call 101 or email innersouth@westyorkshire.pnn.police.uk, if the theft has already occurred.) Noting down registration numbers of any vehicles involved, descriptions of those carrying out the theft, and photographs or videos are of course very useful.

STOP PRESS: as of 17th February, a group of people apparently stealing paving stone have been arrested in the Beeston area. Further details to follow.

This post was written by Lauran Warren using our Create an article for South Leeds Life page.