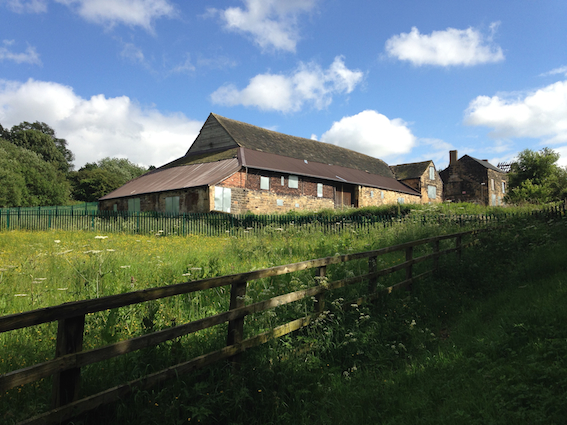 Have you got any old paving slabs hiding in a corner of your garden or garage? If so the Friends of Stank Hall Barn would like to hear from you!

The Friends set up two years ago after South Leeds Life called a public meeting to draw attention to the poor state of the buildings. Their aim is to protect the historical site – Stank Hall is one of the oldest buildings in Leeds – and find a long term use for the barn and associated buildings.

Having run several open days to show people around the site and inside the cathedral-like barn, they are now starting on their first permanent project. They are creating a community garden next to the barn.

The garden, which will be built in raised beds so as not to disturb the archaeology, will follow garden designs from the 15th century when the barn was built. The group plan to grow fruit and vegetables, including older or heritage varieties and give away the produce to volunteers and local residents.

In order to construct the garden they are appealing for residents to donate paving slabs so that they can create a safe working area that doesn’t compromise the archaeology.

A spokesperson for the group said:

“The garden will give us a permanent presence on the site and show that it is being cared for.  We are starting work this Friday (27 February 2015) and welcome anyone who can come along to help for all or part of the day.”

Stank Hall Barn is located across Dewsbury Road opposite the White Rose Centre. The barn dates back to the 15th Century, but Stank Hall itself is much older. It is thought that King John had a hunting lodge on the site and recent work has uncovered evidence of a Norman building.

New Hall, which was built later, was seriously damaged by fire a few years ago.

“We are working closely with Leeds City Council, who own the site, and English Heritage, but we remain very concerned about the state of the buildings. These are irreplaceable gems right here in South Leeds and they need urgent attention to protect them.”

Ideas for longer term uses for the buildings include a museum, restaurant, community centre and wedding venue, but there are are no firm plans at this stage.