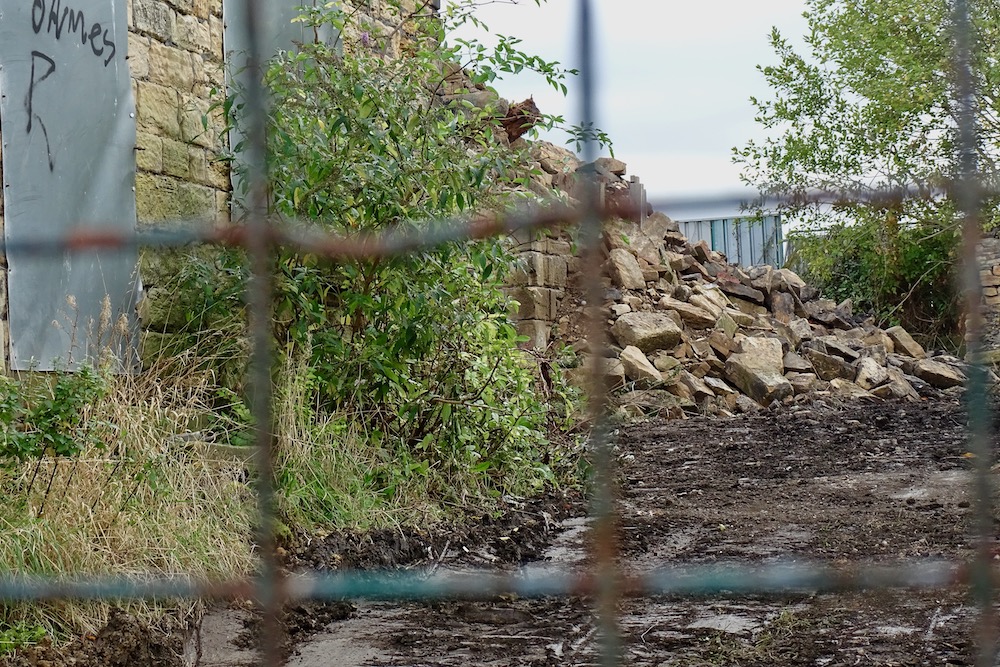 One of the historic listed buildings at Stank Hall was demolished last month by Leeds City Council, who own the site.

Stank Hall Barn is a 15th century tithe barn located off Dewsbury Road near the White Rose Shopping Centre. In 2013 South Leeds Life kickstarted a campaign to save the barn from vandalism and helped create a Friends group.

The Friends of Stank Hall Barn helped uncover some of the site’s history including the two adjacent buildings Stank Hall and New Hall. Stank Hall is even older than the barn and is probably the oldest secular building in Leeds, dating to the 13th century and originally being a Royal Hunting Lodge.

The ‘New’ Hall, although more recent (only 400 years old) was also Grade II listed, but has now been demolished by the Council which owns the entire site.

We asked Leeds City Council for a statement, a spokesperson said:

“Stank New Hall suffered a serious fire in October 2011, this left the building without a roof and substantially weakened its structure.

“Structural Scaffolding was erected to support the East, West and South elevations, which has been monitored closely ever since and measures to secure the site to prevent unauthorised access have been in place, although due to its isolated location regular breaches have been found.

“In late 2021 the council’s property management team identified concerns about the building structure prompting a structural survey to be undertaken. This survey concluded that the west and adjoining corner of the south elevation of the building were at risk of inward collapse.

“Due to the continued number of incidents of unauthorised access and the potential hazard posed to anyone who should gain unauthorised access to the site and following consultation with the council’s conservation officer, emergency works have been undertaken to bring the structure into a safe state.

“Prior to works being undertaken, the building was recorded in line with a specification agreed with West Yorkshire Archaeology Advisory Service. In addition throughout the works an archaeologist was on site, recording elements of the structure that were uncovered and advised on the need to preserve any items, further to this parts of the chimney stack have been retained for preservation and moved away from the building for safe storage.

“The wider Stank Hall Barn site continues to be actively patrolled to minimise the risk of unauthorised access and the fencing is regularly inspected and repaired where necessary. There have been several attempts made to find solutions which would bring the buildings back into active use, however there has been little market interest.

“The solution to convert the buildings into a wedding venue have also fallen away due to decisions taken by the proposed operator. The council is actively exploring potential opportunities to improve the viability of bringing forward the re-use of the buildings in order to support the delivery of a sustainable solution.”

We also spoke to the Friends of Stank Hall Barn who told us they were incredibly frustrated by the Council’s actions. Having been granted a lease to create a medieval vegetable garden on the site, providing free produce to local residents, the Council changed the locks in late 2019 and group have been unable to access the site, even to clear it. The licence expired last year and all attempts to renew it have been met by silence.

The group say their Business Plan, which involved workspace, community centre, heritage building skills training and grow space, was rejected by the Council who said the group didn’t have the skills and experiencefor such a project. This despite the group including architects, structural engineers, heritage builders, archaeologists and heritage business managers. The group’s idea to create a wedding venue was used by the Council to market the site, but that deal has now fallen through.

In their statement the Friends group conclude:

“During our time working with the site local people have repeatedly commented that this site would not have been treated so badly if it had been in a richer part of Leeds, but rather celebrated and used for the benefit of the community. We are unable to comment on the accuracy of this statement, but it is beginning to look rather likely, especially now given the support to community and heritage by Leeds 2023, when the oldest building in the city is being ignored.”

You can read the group’s full statement below. For now the site languishes as it has done for the last 20 years.

Statement from Friends of Stank Hall

“We have attempted to work with Leeds City Council over the last 8 years to put together a long-term plan for the site, benefiting both the council with income, and the local community with workspace, community centre, heritage building skills training and grow space but have been thwarted at every turn.

“Our business plan, which also included a wedding venue something they hadn’t considered before, was used by them to market the site back in 2018 but afterwards we were not considered experienced enough to run a business in a heritage site. This is despite one of our co-chairs running a shop in a National Trust property and being supported by the Head of LCC to take on a  commercial 15thc property in the City Centre. Both chairs also having set up heritage building projects in the past and having a structural engineer, heritage approved builders, archaeologists and an architect as part of our work team within the Friend’s group. We also have ready to pass Architect plans for all the buildings and funding streams waiting for us to access to do this

“We have been kept offsite since the end of 2019 with keys changed and our licence expired in March 2021, all attempts to communicate to renew have been ignored, and all our hard work left to overgrow as we are no longer legally allowed onsite, even to clear it out. As this has happened at a time when community engagement, warm space and tackling food poverty is paramount it is doubly frustrating.

“We were informed of the demolition, not by the council but by the demolition team. Queries as to whether the stones would be numbered and stored safely for any future rebuild, as agreed in our monthly minuted meeting with LCC, Angela Gabriel and Heritage England, haven’t been replied to, we suspect as with previous removals, now missing, they won’t be stored correctly.

“We would like to remind the council of the agreement put in place in 2018 with ourselves and Angela Gabriel in those regular minuted meetings, that should this sale fall through it would be handed over to ourselves and the community to regenerate and restore.

“During our time working with the site local people have repeatedly commented that this site would not have been treated so badly if it had been in a richer part of Leeds, but rather celebrated and used for the benefit of the community.  We are unable to comment on the accuracy of this statement, but it is beginning to look rather likely, especially now given the support to community and heritage by Leeds 2023, when the oldest building in the city is being ignored.”