We start this week down on Dewsbury Road near the One Stop Centre, where children from Flowerpots Day Nursery helped Groundwork and Beeston in Bloom to plant new flowers in a communal garden this week. 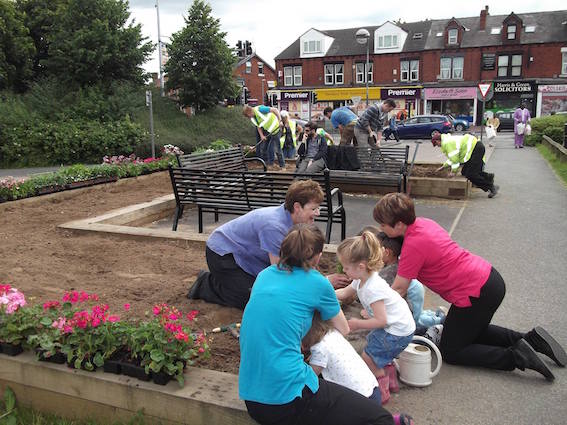 Also enjoying some gardening are members at The Bridge in Holbeck. They’ve also been singing in their choir.

And Beeston in Bloom welcomed a group of young people to Cross Flatts Park. They were there to plan their National Citizen Service project.

The latest edition of the South Leeds Community Policing newsletter is out now. Meanwhile the off road team seized an uninsured scooter that was causing a nuisance in Beeston. And the gardening theme was continues by the Police Explorers (16-18 year olds) who helped Beeston in Bloom on yet another project on land by Dewsbury Road near the Tommy Wass.

James is putting his life back together following mental illness thanks to the transitional housing scheme in Cottingley. You can read his story on the Better Lives for People in Leeds blog.

The match day residents parking scheme will be under discussion tomorrow (7 July) at the Beeston Community Forum, which takes place at Beeston village Community Centre from 7:30pm.

There are two meetings in Cottingley next Wednesday (13 July). At 6:45pm it’s the Community Centre AGM, that’s followed at 8pm by the Cottingley Hall TRAC meeting.

Find out about volunteer Ian’s house makeover on the SLATE website.

If you missed Oddsocks’ production of Macbeth, catch up with some great photos posted by Friends of Middleton Park. They’re hosting the Spa quartet on Sunday, whilst Middleton Fun Fair takes place nearby over the weekend.

It’s not the new Hollywood blockbuster, Cardiac Arrest vs Heart Attack is an information poster which explains the difference between cardiac arrest (electrical problem) and heart attack (plumbing problem). Thanks to Middleton Community First Responders for bringing it to our attention.

Will you be joining Carroll and Mary at Middleton Railway on Saturday? We should explain that they are two vintage Hudswell diesel engines that will be pulling the trains.

And finally, it’s the last call for the South Leeds Community Hike in the Lake District next weekend (16 & 17 July). Get in touch quickly if you want to join them.