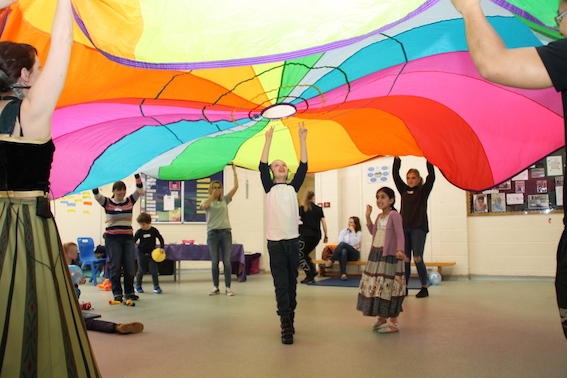 Special Needs And Parent Support (SNAPS) opened their second site at Broomfield SILC school last weekend (13 May 2017). The charity now in its 14th year provides specialist therapies to children with additional needs and much-needed support for their families and this is the first time the charity has expanded beyond its original home at Penny Field school in Meanwood.

Boasting a state of the art sensory room and rebound therapy room Broomfield was a perfect choice to host the charity. Opening the day was Leader of Leeds City council Judith Blake and taking a short break from the election campaign, MP Hilary Benn.

Mr Benn spent time chatting with the staff, volunteers, children and parents. He enjoyed testing out the interactive sensory equipment but fell short of trying out the trampoline. Mr Benn said how fantastic it was that we had opened at Broomfield,

“Looking at the enjoyment on the children’s faces and the range of activities provided by SNAPS shows that it will be a huge hit.” He went on to say, “I would encourage anyone who has not heard of SNAPS and has a child who could benefit from what they have to offer comes down and takes a look as they will find it is something truly special”.

“SNAPS is a charity that has grown over the years to provide invaluable support for children with disabilities and their families and it’s fantastic that they’ve now been able to open a site in South Leeds.  It was an honour to attend the opening of the Broomfield site and to share in what was a really special occasion for the charity. It’s great that families from across the area will now be able to benefit from the outstanding support the charity provides for many years to come.”

The children on the day had an amazing time and cannot wait until the next session on Saturday 10 June.

This post was written by Emmie Johnson using our Create an article for South Leeds Life page.