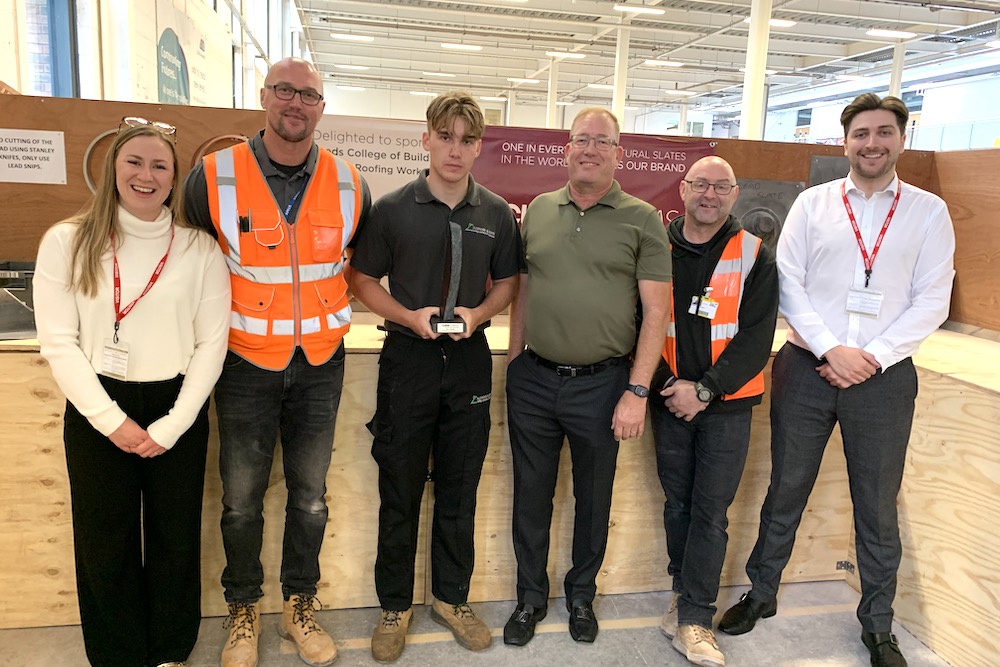 A Leeds College of Building apprentice is celebrating after winning a prestigious roofing award.

Harry Aldridge (19) received the 2021 Roof Slating Apprentice of the Year award from CUPA PIZARRAS, the world leader in the production and distribution of slate.

Harry was chosen for his exceptional commitment, determination, and dedication to training as judged by Leeds College of Building representatives and CUPA PIZARRAS. He received the bespoke slate trophy at a ceremony in front of his peers in the College’s specialist Southbank Campus roofing workshop.

“Harry was selected as this year’s CUPA PIZARRAS winner for pushing himself hard and becoming so skilled in his trade. He is a true success story as he faced many challenges. Despite this, Harry has tackled them all head-on and actually taught the staff a lot too as we adapted to his needs. He is a real inspiration to other students and an example of what can be achieved when you go above and beyond.”

Harry works for the family business Aldridge & Sons Roofing Ltd. in Sunbury-on-Thames, Surrey. Since age 16, Harry travelled for the specialist training at Leeds College of Building on block release with support from The Construction Industry Training Board (CITB).

Harry has since completed an NVQ Level 2 and 3 Apprenticeship in Roof Slating & Tiling, and gained functional skills qualifications in maths and English. After three years of training, Harry is being promoted to Supervisor and will lead a team of his own in his business.

“I’m really proud to win this award. I learned loads of new skills and was pushed hard. Not only did I improve my trade skills, I increased my confidence and communication skills. I have been able to use this learning back on site where company mentors have supported me. My advice to others would be to give it a go and earn while you learn.”

“Both CUPA PIZARRAS and Burton Roofing Merchants acknowledge the need for more skilled labour within the construction industry and is why partnerships such as these are so crucial. We wholeheartedly support Leeds College of Building in its pursuit of excellence and development of industry skills through apprentices.”

CUPA PIZARRAS is a longstanding supporter of the College and donates much-needed roofing supplies (including its natural slate range) through Burton Roofing Merchants Ltd.