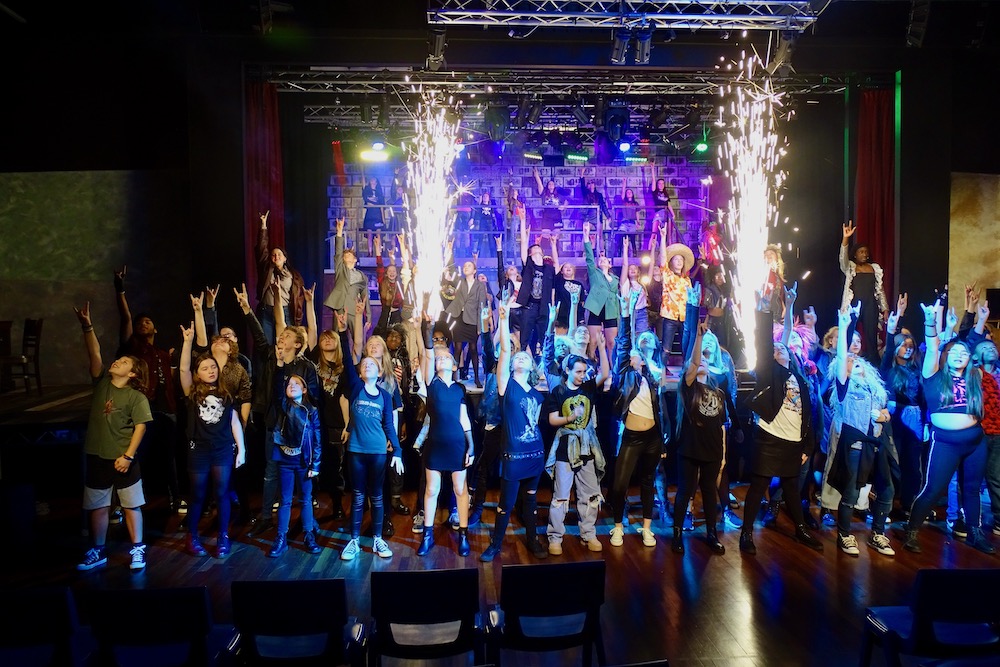 I had the privilege of sitting in on the dress rehearsal of Cockburn School’s production of Rock Of Ages and spoke to some of the leading actors afterwards.

I started by asking about the show and how they would sell it to someone who was thinking about coming to see it. They explained that it’s a ‘juke box musical’, the songs are old hits that everyone knows rather than new songs written for the show, in this case 1980s rock classics. They also told me it’s very funny, although it has some serious messages too:

“Life is complicated, things don’t always turn out as you plan. But that’s OK, you can change and adapt.”

The show is on for three days this week (the public shows are sold out), but work started last summer. Auditions and casting took place in July, with an round of auditions for the new Year 7 in September. Rehearsals started in earnest in September and have got more intense with evening and weekend sessions as performances got closer.

There are 100 students in the cast with more working in tech, front of house, etc. They range from Year 7 up to Year 11.

“You have to manage your school work and your rehearsals. Some of us have GCSEs coming up so we have to take that seriously, but rehearsals can be a useful break.”

All but one of the leads I spoke to want to pursue a career in the theatre. Both Abiss and Lachlan spoke about how they would like to become drama teachers, saying they have been inspired by the staff at Cockburn and the standard of the shows the school puts on.

“Some of us have been in these shows for five years. It’s become a big part of  autumn and the run up to Christmas, really something to look forward to. And moving from a part in the chorus in Year 7 to a lead role in Year 11 has been a fantastic experience.”

“I’ve enjoyed this and might do more acting, but only as an extra curricular activity.”

“This show is like a big family, it’s so supportive. The cast, crew and teachers care about each other. You continually see people helping each other with their lines, learning their cues, checking they’ve got the right props.”

Rock of Ages is being performed 30 November – 2 December. With matinee performances for local primary schools and Year 7 of Cockburn Laurence Calvert Academy, the cast will have performed to over 1,000 people over three days this week.

As they say at the end of the finale “Don’t stop!”