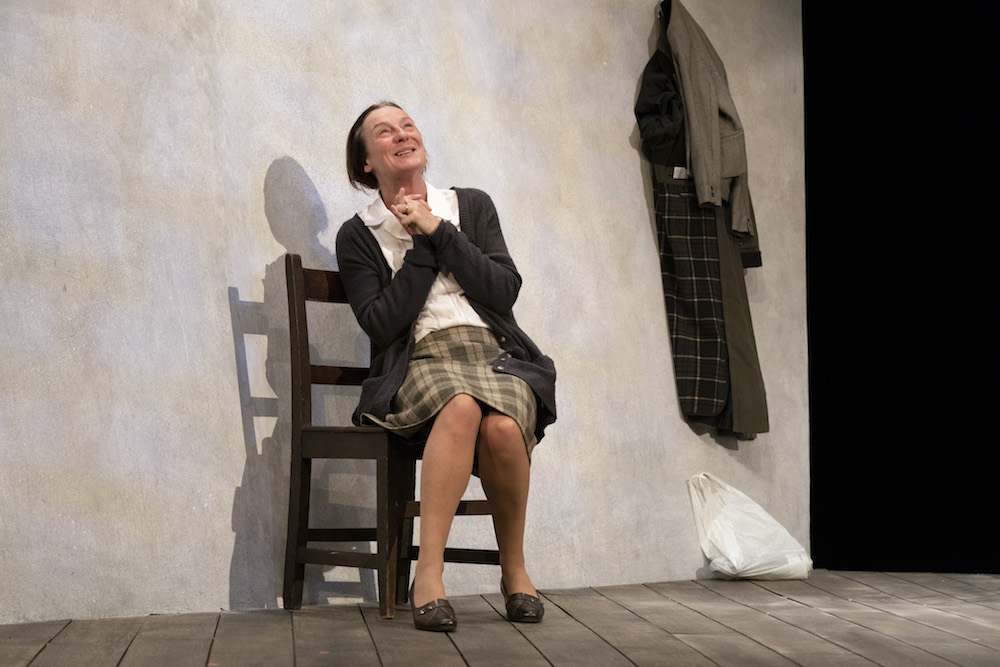 The final production in the Courtyard Theatre at West Yorkshire Playhouse is a revival of Alan Bennett’s Talking Heads.

This iconic set of dramatic monologues was written for television and broadcast across six weeks in the BBC thirty years ago in 1988. It is being presented in two sets of three and each show packs quite an emotional punch.

The programme talks about middle-aged, middle-class, middle-Englanders, but I think these characters more like Everyman. The plays remain popular with audiences because we can all see part of ourselves, our family or our friends in the richly drawn characters. Bennett’s ear of a phrase (overheard on the bus perhaps?) brings humour and recognition and here in Leeds we appreciate references to a doctor living in Alwoodley or a shop on Tong Road.

In Graham, Peggy and Muriel we meet characters, all ordinary people, seeing their lives change around them for various reasons. Graham lives with his widowed mum in A Chip In The Sugar and has to cope with an old flame from her past. In A Woman of No Importance, Peggy’s life is centred on her work in the office, but is interrupted by ill health, whilst Muriel is newly widowed in Soldiering On and discovers another side to both her son and daughter.

All three plays use the device of a phrase, not exactly a catchphrase, more a riff. Graham finishes many of his reflections with “… I didn’t say anything”; Peggy with “We laughed” and Muriel is advised by everyone “Don’t make any big decisions.”

The repetition triggers laughter, but the phases get darker as each play develops. This is Bennett’s great skill of mixing comedy and tragedy, using the comedy to bring characters to life and bring depth to their tragedy. These are not sad plays, just true to life.

I watched out for the device in the second set; Susan, Doris and Irene, but didn’t spot it. This set includes my two favourite monologues Love Among The Lentils with Susan the Vicar’s wife with an alcohol problem; and A Cream Cracker Under The Settee which is discovered by Doris after she suffers a fall. Irene is A Woman of Letters who breaks her isolation when she falls foul of the law.

Enormous credit must go to the six actors who each hold the stage on their own and hold the audience rapt with their performances. Chris Chilton is Graham; Tina Gray is Muriel; Cate Hamer is Susan; Vanessa Rosenthal is Irene; Marlene Sidaway is Doris; and Flo Wilson is Peggy.

The set, designed by Laura Ann Price, uses a revolving box that becomes various rooms in the characters’ homes, or turned away creates a background wall for a larger setting. I don’t know whether this is deliberate but its shape reminds me of a television (before the advent of flat screen technology) and the origins of the plays.

The old West Yorkshire Playhouse is going out on a high and I would strongly recommend you to see one or both of these shows.