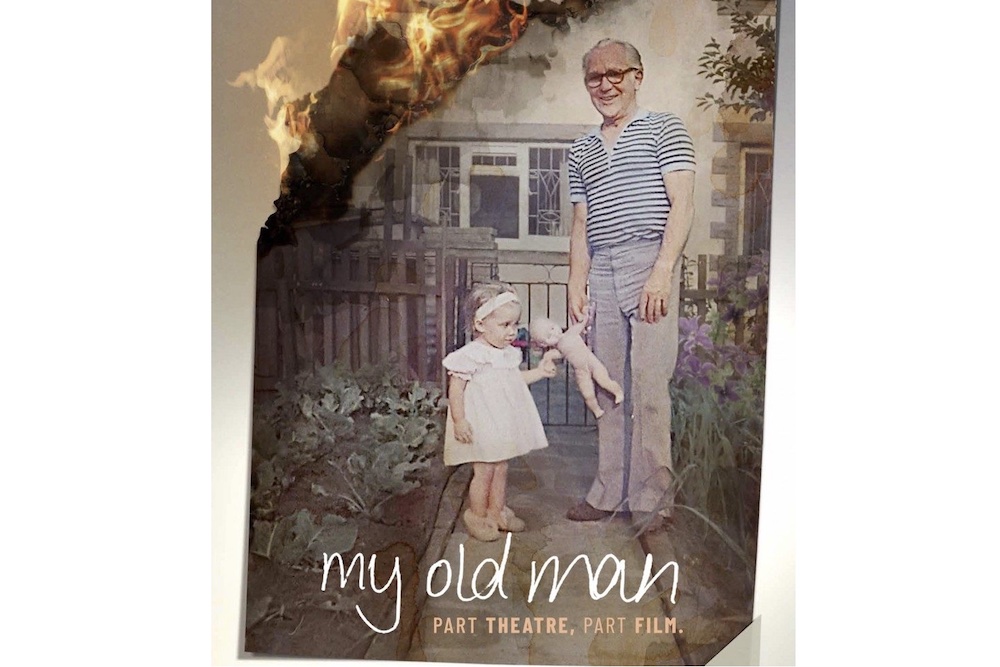 I went along to see the play “My Old Man” by imagine if Theatre Company – it is part theatre production and part film which was an interesting mix.

As we walked into the theatre space at Prime Studios there was the traditional audience seating but also some tables with tablecloths, doilies, dominoes and Polish snacks. As we waited for the performance to begin we were serenaded by a singer beautifully performing old song book classics such as Dream A Little Dream.

As Michal, one of the main characters is an old, blind, domino-loving Polish man this was a really nice touch. On each table there were also framed childhood photographs of his granddaughter, Tasha (played by Chesca Cholewa, also the writer of the play and Artistic Director and CEO of imagine if). This made you feel close to the family, before the production even began.

Audience members were also asked to try on glasses that replicate the blindness that different conditions can cause and then to try and continue playing dominoes. Needless to say this was almost impossible. It did make you think about the nature of blindness and so you had those thoughts in our mind before you encountered blind Michal.

My Old Man is a spin-off of the 2019 production Jadek, which toured prisons, theatres and community venues including The Holbeck club. In this production, Tasha has moved out of her grandfather, Michal Piwowarski’s home. Tasha’s writing career is going well and she has a lawyer boyfriend .

Michal meanwhile, has a great relationship with his neighbour Cathy (played brilliantly by Lorraine Bruce) who drops by, cleans for him, chats away to him and generally makes sure that he is ok. Things begin to go awry when Michal’s friend and next door neighbour Mark moves out, and a new, much less friendly person moves in.

When the new neighbour upsets Lorraine, Michal takes the matter into his own hands.

There were some genuinely laugh-out-loud moments in this play that tackles themes of community and Polish identity. There were also many very touching and sobering moments.

“I’m thirty and I’ve never in my life seen a Polish person on stage or TV, who is not an immigrant, cleaner or drug dealer. These are dangerously bad stereotypes. Poles are the largest group of foreign nationals, and Polish is England’s second language, but you wouldn’t know that from our programming…There is scant representation of Poles in mainstream British entertainment.”

With this production imagine if hope to engage new audiences, focusing on those with Polish heritage and first time theatre goers.

The mix of theatre and film production will help with the latter as to have a bit of both is a helpful transition from wholly film to some on stage live drama.

I enjoyed this production and as I had seen and very much enjoyed Jadek previously, I was pleased to have the opportunity to catch up with Tasha and Michal.

As Liam Fox (you may know him as Dan Spencer from Emmerdale) who plays the nasty neighbour, Steve, perfectly sums it up:

“The story of My Old Man is so apt for what we’ve been experiencing over the last couple of years – with the rising hate crimes, Brexit and Trump and the mistrust which people have towards each other. But it’s also about how most people are good people – but we can just be swayed by events or what we see on the news.

“I think it’s really important that My Old Man brings the story of a normal working-class family, who have Polish heritage, and who are dealing with the fall-out from events over the past few years to stage and screen – and I hope it makes people think.”

My Old Man is currently touring at the following venues: