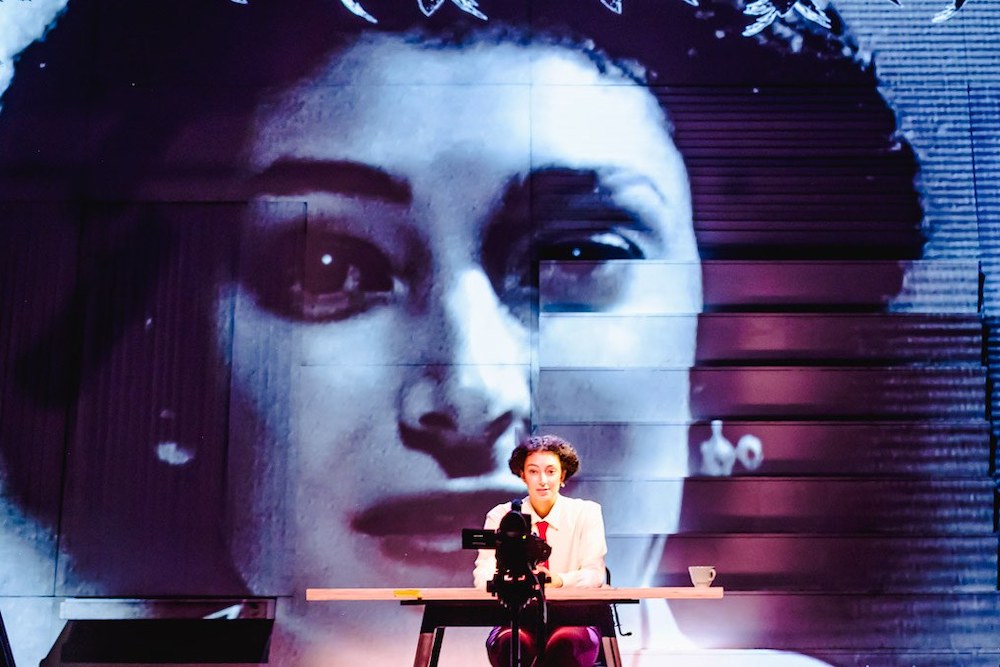 I was blown away by this production of Dracula: The Untold Story at Leeds Playhouse.

When I first entered the Courtyard Theatre the stage setting looked very minimal but it was not to remain that way.

The play is set in Marylebone police station on New Year’s Eve in 1971. A woman claiming to be Mina Harker is confessing to a brutal murder. But Mina would be 90 years old by now and this is a young woman with a terrifying and fascinating story.

As a huge Dracula fan, I love the fact that this is a retelling from Mina’s perspective – she is the hero (and sometimes the villain). The production asks questions about what happens when evil is confronted head-on and whether by trying to destroy monsters, Mina herself has become one. There are interesting themes that run throughout the play such as who creates history and what is truth.

The most astounding thing about this production is the fact that it is staged as a live graphic novel. A company called “imitating the dog” created this visual treat and they say rehearsing within the restrictions imposed by the pandemic was not a hindrance to their staging and live exploration of the graphic novel. Intimacy is created through camera and projection technologies.

The audience gasped at lots of the spectacle – I found it ground-breaking. It was thrilling to see Mina travel around the world and meet famous historical figures and doing – well, what she felt she had a duty to do. It provided a fascinating take on history and whether you can change the outcome of world events.

Full respect must go to the actors Riana Duce as Mina Harker, Adela Rajnovic as WPC Williams and Matt Prendergast as DS Donaldson. There were points in the play where Adela and Matt had to crouch in awkward positions for periods of time so that on the graphic novel screen they appeared to be sat at lunch together or huddled together on a cigarette break from Mina’s interrogation. In reality the actors were on opposite ends of the stage – the effect on screen was incredibly clever and realistic.

There was much graphic-novel-style violence and blood but there were also many comic moments and the audience as a whole gasped on more than one occasion.

imitating the dog, the company who created this performance say “The work aims to move audiences intellectually and emotionally and set new standards for the integration of live performance and digital technology.” and they completely achieved this with Dracula Untold.

If you can I would encourage you to see it – innovative and thoroughly entertaining. It runs until Saturday 9 October 2021 and you can purchase tickets here: leedsplayhouse.org.uk/events/dracula-the-untold-story