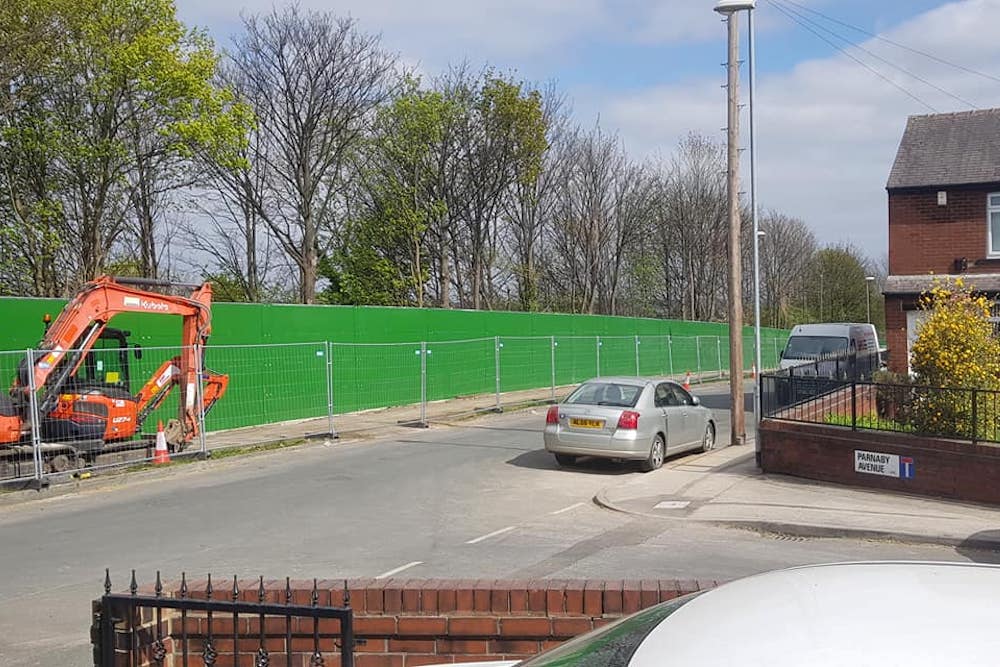 A new metal sound barrier by the M621 in Hunslet has caused uproar among many local residents, who say it has had a negative impact on their community and likened it to “a prison wall”.

Highways England replaced an ageing wooden fence with a new green fence on Parnaby Road, which faces the motorway by junction 7, as part of its improvement works earlier this year.

Many residents say the new fence has made no difference to noise levels, with the bright green colour a particular cause for concern, and feel Highways England has not engaged with them properly.

Noisy overnight construction work has also been raised as a major concern, especially for families with young children and people whose work involves driving and early shift times.

But Highways England has said the effectiveness of the barrier cannot be judged until the entire junction 7 scheme is finished.

It added that its planning application – including the colour of the fence – was approved by Leeds City Council with no objections.

It also said that some of the overnight noise barrier work was unavoidable to avoid closing several slip roads during the day.

“We’re carrying out improvements to the M621 between junctions 6 and 7 to reduce congestion and reduce noise levels for residents living nearby. This work is ongoing, so the effectiveness of the noise barriers can’t be accurately judged until the scheme is finished.

“We wrote to residents in February to keep them updated on all this work and also held engagement events before the scheme started. We are doing as much of the work during the day as possible but need to carry out some of the work overnight, when traffic flows are lowest, to minimise congestion caused by the required lane closures.”

However, frustration and disappointment with the project are widespread in the local community.

“It’s horrendous, it feels like you’re in a prison,” said Westbury Mount resident Kelly Munro, who is part of the local Neighbourhood Watch team. “The colour is awful and it’s not made any difference to noise whatsoever”.

Another local resident, Rachael Knowles, said it reminded her “of a prison wall or old council metal they used to put up over boarded up house[s]” and added Highways England had not communicated with residents about the overnight works that have left people struggling for sleep.

“It’s like nobody cares what we feel,” she concluded.

“It’s like a prison wall, it’s ugly, it doesn’t match up. When lockdown is over, it’s not going to make any difference,” underlined a resident on Back Westbury Street.

“The noise is still the same and it’s a complete eyesore. It looks like a temporary barrier. It’s not what we were led to believe when we went to the meetings.”

“We were just as shocked as local residents when the fence went up and we completely understand their frustration and upset.

“We have spoken to Highways England to see what can be done to resolve the issue and we ask residents to bear with us in what are extremely difficult times. Everyone is working flat out across the local area to try and minimise the impact of Covid-19 and protect our most vulnerable citizens, this does mean that other issues may take longer than usual to be addressed but please be assured that we have picked this up with the relevant authorities and will continue to push for a resolution that local residents are happy with.”

Homeowners in the area fear that house prices will fall due to the new fence and that the bright green colour will inevitably attract graffiti and harm the area’s reputation.

“To me it’ll devalue my home. It just looks cheap. It feels like half a job done. There’s been no transparency about it” said Richard Clarke

The environmental impact also concerns some residents, with trees cut down to make way for the new fence and reports of litter left by workmen.

“It’s awful. It’s better than a wooden fence, but it’s like a prison,” said a Back Westbury Street resident.

“I’m more bothered about the trees they’ve cut down, I’m fuming about that, with all the pollution around here. The birds have gone.

“It would have been better to keep a lower wooden fence, at least it would look nicer with all the noise.”

Changing the barrier’s colour to a less ostentatious shade of green to allow it to fit in with its surroundings has been suggested as a solution by some residents.

Residents have had to deal with construction noise dating back to last year. The damp, warm properties mean that people have to sleep with their windows open in warm weather, explains local resident Nick Williams, but this is impossible while noisy construction work is carried out.

One resident, Stephanie Pullen, posted a video on social media where loud drilling work was clearly audible after 10pm on Wednesday 15 April.

@HighwaysYORKS is this really acceptable for 10 o'clock at night also work men shouting to each other pic.twitter.com/WlBU34zmDT

@HighwaysYORKS why is there yet again unplanned work going on in Leeds I have my window open as it's warm and all I can hear is drilling at this time of night. This is junction 7 M62 motorway next to the parnaby in LS10. Get something done.

However, the new fence has not been met with unanimous disapproval. “You don’t notice the motorway here, it’s just background noise, you get used to it. It seems all right to me,” said Danny Foster, who lives on Westbury Place South.

“I’m not too keen on the colour but it’s better than what it was before – it was just a wooden fence with lots of holes, it was kicked in, it was rotten,” a Parnaby Street resident said.

The installation of a noise and safety barrier is the second part of phase 1 of Highways England’s plan to improve safety and reduce congestion on the M621.

An extra lane is being added to the eastbound exit slip road at junction 7 and the number of lanes on the northern part of the roundabout will double from two to four.

Highways England has said the noise barrier will also act as a safety barrier in some locations.

This post was amended on 17 April at 3:30pm to reflect the up to date position of the local Councillors.