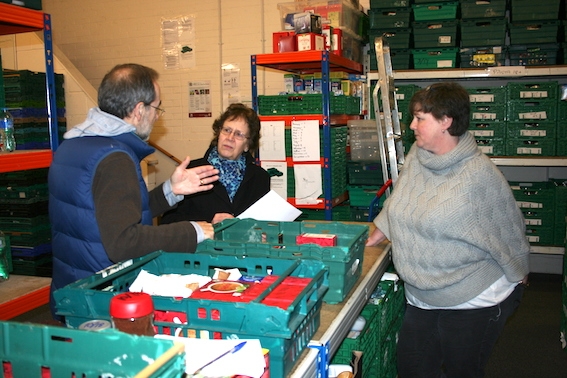 Volunteers in South Leeds were joined by local Councillor Judith Blake this week as she went to see how the South and East Foodbank operates.

The Foodbank is run by around 280 volunteers who have come together to help people who are facing some form of crisis and have been referred through to them from organisations such as Belle Isle Tenant Management Office (BITMO).

Councillor Blake joined John Casey, Wendy Doyle, John Newbould and other volunteers as they sorted donations, collected from sites around the south of the city including Middleton Asda, ready to go to the 11 distribution centres.

The Foodbank relies completely on donations, both in terms of food and other non-perishable items, but also cash donations to help pay the costs of renting warehouse space and keeping distribution vans on the road.

Councillor Blake asked if any recent trends had been identified regarding foodbank use and was told that the only real trend was an increase in the numbers of people accessing them.  Clients vary from single people to families, are usually only accessed once in a time of crisis and that many people who have benefitted from them themselves then come back and volunteer so that they can help others who find themselves in a similar situation.

The Foodbank launched an appeal last November for Advent Calendars and selection boxes, the response was such that every child whose family accessed a food bank in December last year was given a calendar and section box.  A large donation of presents meant that the food bank was also able to ensure that the children in each family who accessed their services were able to open a present on Christmas Day.

A similar appeal has now been launched for Easter eggs and people are encouraged to bring donations to any of the 11 distribution sites.  Anyone who wishes to help though donating or volunteering can contact Wendy Doyle, the Project Manager, on (0113) 271 5866.

“It is a damning indictment of the Government’s welfare reform that there has been such a sharp increase in the numbers of people accessing foodbanks.  From visiting here today it is clear that anyone can find themselves in circumstances where they suddenly need help.  I have heard stories about people on zero hour contracts, people who have had their tax credits stopped, people who have just started a new job and don’t get paid for six or seven weeks. These are hardworking people who find themselves needing a helping hand.

“The work that John and the other volunteers do is incredible and I would like to thank them for their hard work and dedication.  Donations are always needed and people can drop things off at the distribution centres or log onto the website to make a cash donation to help the food bank continue to run.”

“The foodbank was set up in 2013 and it has been a mammoth effort to bring it all together.  It is particularly encouraging to see the joint working with Leeds City Council and other food aid providers across the city to ensure that there is a coordinated programme across all areas.

“I think that Leeds is ahead of the game in that respect and that is very much due to the relationship between us, the Council and other providers.  We recognise that this is not a long term solution and our aim is to be able to address some of the root issues such as employment and that is why we want to continue to build on the great relationships we already have.  This is essentially about people helping people and we will continue to do that for as long as is necessary.”