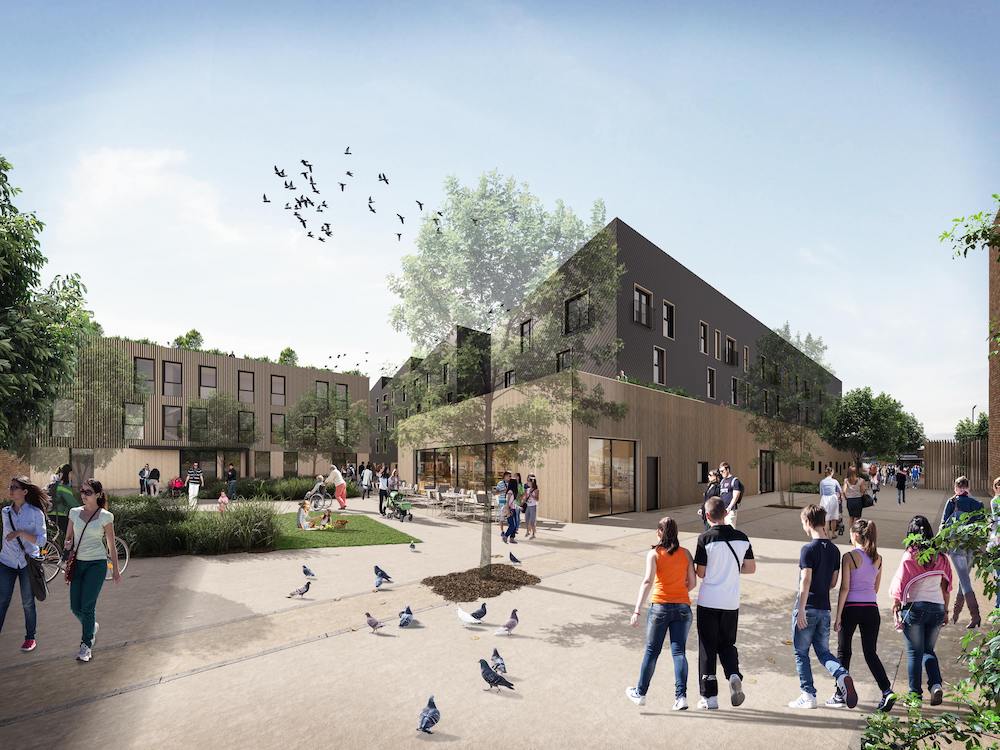 Located in phase three of its pioneering £250m Climate Innovation District in Hunslet, which spans both sides of the River Aire in the South Bank regeneration scheme, the building will offer a sustainable solution to education, the growing needs of an ageing population and a loneliness epidemic which is sweeping across UK cities.

Thought to be one of the first developments in the world to house a primary school, care home and residential apartments under one roof, the proposed purpose-built four-storey, 120,000 sq. ft building will include a ground floor nursery; a two-form entry primary school for 420 pupils; a 70-room care home; 72 one and two-bedroom apartments and a community café, focused around a central shared central courtyard garden.

In the UK, 28% of all households are now occupied by a single person, meaning there are an increasing number of people across all age groups who live isolated lives without meaningful day-to-day contact with others.  To combat this, every element of the proposed building and surrounding public realm has been carefully designed to encourage interaction between the generations and the wider community.

The care home’s communal areas, living spaces and the residential apartments will overlook the central courtyard which will be used as play and teaching areas by the school in term time weekdays, and opened to the wider neighbourhood during evenings, weekends and school holidays. It is hoped that residents of the care home and students at the school will meet through joint daily activities which have shown proven benefits for the social skills of children and the mental and physical well-being of older people, as documented in the Channel 4 programme ‘Old People’s Home for 4 Years Olds’.

The primary school will provide a much-needed educational facility for those living in the Climate Innovation District and beyond in the areas of Hunslet, Beeston, Cross Green and Richmond Hill, as well as more than 10,000 new homes planned within a mile radius of the site. The developer is in talks with local school providers and will ensure that climate change and the environment will be a key part of the curriculum. Pupils will have the unique opportunity to live and breathe a sustainable way of life through their day-to-day learning. They will see first-hand the environmental elements of the District, from renewable energy sources to the otter holt, bird and bat boxes and beehives which protect the rich wildlife along the River Aire; equipping them with the knowledge to become climate-conscious advocates in the future.

“It has always been part of our long-term plan for a car-free neighbourhood to build infrastructure and amenities within walking or cycling distance of our homes. However, we want to do so much more than that in terms of making those facilities part of the growing community here. Usually when a school is built in an existing neighbourhood, it’s fenced off from the people who live and work in the area which is a real waste of both facilities and recreational space and ruins the urban grain.

“Primary schools should be healthy, bright, colourful, welcoming spaces and we see the school and the wider development, including the café, at the heart of the whole neighbourhood; for everyone to use, not only for teachers, children and their parents. We’ve included apartments as well to provide a potential option for teachers, carers and staff working at the development who are happy to go car-free and make the most of living and working in the city centre.”

The concept of intergenerational living originated in the 1970s in Tokyo when a nursery and care home were combined. There have also been similar successful schemes across Europe and in Singapore the government has recently committed £1.7bn to initiatives to improve ageing in the country, including ten new intergenerational housing developments. In the Netherlands, there are a number of apartment schemes designed to accommodate both students and older residents, but Citu’s building is one of the first which will provide homes and educational facilities for young, old, and everyone in between.

Adds Jonathan: “The UK has been slow to embrace intergenerational living, despite the fact that the number of over 65s in Britain is expected to almost double by 2030. As part of our research I visited Nightingale House, a care home in Clapham which has opened the UK’s first on-site nursery and saw the hugely positive impact it had for the residents, children and the neighbouring community. Our development takes this concept to the next level, creating a purpose-built residential, care and educational facility located in a zero-carbon neighbourhood which really puts health and wellbeing at its heart.”

The low-carbon building will be manufactured using the same cutting-edge timber-framed system as the 800 plus homes being built at the District. It will be powered using some renewable energy and will have an air-tight, high performance building fabric to maintain building efficiency and comfort.

In addition to the shared central courtyard, the plans also feature ample green landscaping and two further areas of public realm connected by cycle paths and pedestrian routes. This includes a 200-metre-long, 100,000sq. ft green, public boulevard leading to the new Citu pedestrian bridge, due to open this October, which will provide a vital link across the river from the city centre to the South Bank. Once completed, the District will feature more than 7 acres of public realm and green space which will naturally encourage those who live and work into the area to bump into one another; further nurturing a sense of place and community.

A detailed planning application for the building has been submitted which can be found here. If approved, construction will begin next year with the school and wider facilities open for the September 2022 term.

2 Replies to “Plans unveiled for intergenerational building in Hunslet”