The South & West Plans Committee approved a report from planning officers on the controversial Ice Pak development on Barkly Road in Beeston at the their meeting on Thursday 18 February. 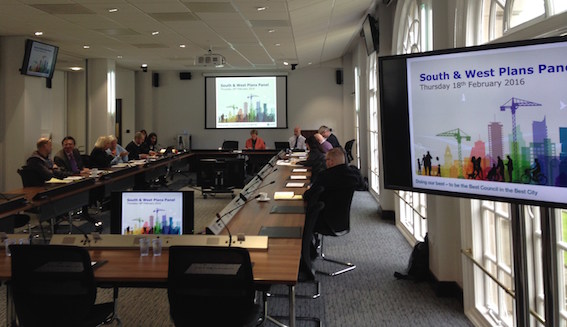 A summary of the report was published on South Leeds Life on 11 February. The final recommendation is to:

“As the applicants have now appealed against non determination it is recommended that members authorise officers to make representations to the Inspector based on the outstanding concerns which have been set out in the report as at present officers are not in a position to conclude that a development of this scale is acceptable in this location and has sufficiently overcome outstanding amenity and highway concerns.”

Chief Planning Officer Martin Sellors summed up the report saying that the authority had not had sufficient answers from Aspiring Communities to questions about the use of the facilities. They were therefore concerned that it might be primarily used by people outside the area, potentially bringing a large amount of traffic into a residential area.

Cllr Akhtar raised the issue that the site had previously been a factory and that most local residents will have moved in next a factory.

Cllr Heselwood said that the issue of parking was of great concern as the surrounding streets cannot cope with overspill parking. She also wondered how the estimated 660 lorry loads of earth could be removed through these streets.

The Panel voted overwhelmingly to approve the officers’ recommendation. There were two abstentions.